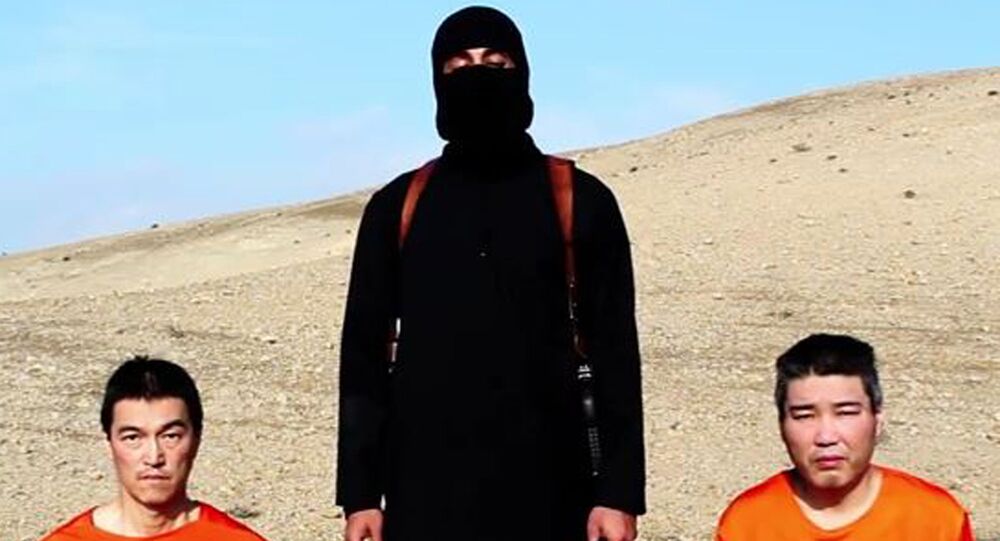 The Islamic State allegedly targeted Japanese nationals for Japan's involvement in the international campaign aimed at destroying the militant group.

MOSCOW, January 20 (Sputnik) — The Islamic State, a brutal extremist group currently controlling large swathes of land in Iraq and Syria, has reportedly released a video message saying that it will kill two Japanese hostages if it does not receive $200 million in 72 hours, the Associated Press reports.

Militants identified the hostages, wearing orange jumpsuit, as Kenji Goto Jogo and Haruna Yukawa, according to the AP. Both are said to be Japanese nationals.

A militant in the footage resembling a Briton from similar videos released by the IS last year, blames Japan for its involvement in the international campaign aimed at destroying the militant group. The AP quoted the man as saying, that "[y]ou have proudly donated $100 million to kill our women and children, to destroy the homes of the Muslims."

"You now have 72 hours to pressure your government into making a wise decision by paying the [$200 million] to save the lives of your citizens," the militant added, according to AFP.

Last week,  Japanese Prime Minister Shinzo Abe pledged to provide around $200 million in assistance to countries that are currently battling the Islamic State, according to Al-Yaum as-Sabia.

"Our country’s stance — contributing to the fight against terrorism without giving in — remains unchanged," Yoshihide Suga, chief spokesman for Japan's government told reporters during a news conference in Tokyo, as quoted by AFP. Earlier, a Japanese diplomat said that the country's authorities were probing the IS threat and the authenticity of the video.

The Islamic State is a jihadist group that has taken large areas of Syria and Iraq under its control. Infamous for their cruelty, the insurgents have kidnapped large numbers of people, including foreign military personnel and journalists. Last year, the IS released a number of videos showing militants executing journalists and aid workers.