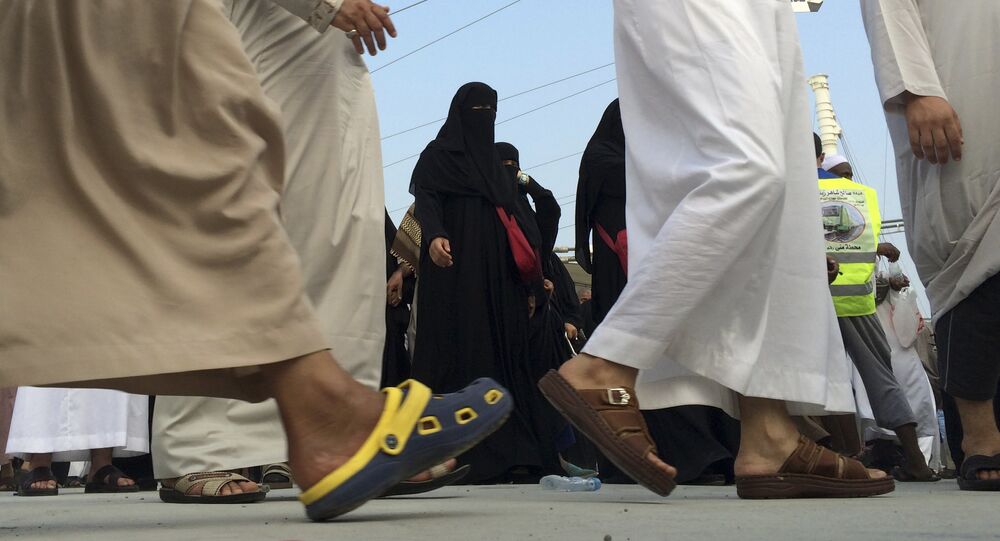 A Burmese woman was publicly beheaded on the street in the Mecca, Saudi Arabia, the holiest city in Islam. The footage of the brutal execution subsequently leaked onto YouTube, prompting a heated debate about the punishment's cruelty.

MOSCOW, January 16 (Sputnik), Ekaterina Blinova — A Burmese woman was publicly beheaded in the Saudi city of Mecca on Monday, January 12, triggering a heated debate regarding the cruelty of the punishment.

© AP Photo / albaraka_news, File
Islamic State Beheads, Crucifies Five in Deir Ezzor Province of Syria
"Laila Bint Abdul Muttalib Basim, a Burmese woman who resided in Saudi Arabia, was executed by sword on Monday after being dragged through the street and held down by four police officers," the Independent reported.

The woman was convicted of the physical abuse and murder of her seven-year-old step-daughter.

Footage of the execution was obtained by the Middle East Eye (MEE), an independent news agency. It showed the decapitation of the Burmese woman in detail, according to the media outlet. On the verge of death, Laila Bint Abdul Muttalib Basim insisted that she was not guilty of killing the child. An executioner proceeded to slash her neck with a sword, making her scream loudly with pain. It took almost  three blows to sever her head from her body.

A Saudi human rights activist noted that the Burmese woman was not injected with painkillers before the execution, explaining that the authorities wanted to inflict maximum suffering on her.

© AFP 2021 / JUSTIN TALLIS
UK Security Services on High Alert Expecting Beheading Attack: Reports
"Authorities have two methods of beheading people. One way is to inject the prisoner with painkillers to numb the pain and the other is without the painkiller. This woman was beheaded without painkillers – they wanted to make the pain more powerful for her," said Mohammed al-Saeedi, an activist from the Eastern Province, as quoted by the MEE.

The video of the execution was uploaded onto YouTube and sparked a heated debate in the social media. The MEE pointed out that some posters expressed their doubts regarding the woman's guilt since she had continued to profess her innocence until she was put to death.

"A guilty offender, at the moment of execution, is plagued by their conscience, and the best conclusion to an execution is if the sentenced person confesses to the crime. This woman's insistence that she is innocent and never committed the murder is more than a small sign that we should question how she confessed and the documents according to which she was sentenced," an unnamed blogger wrote, as cited by the MEE.

It should be noted that Saudi Arabia's authorities beheaded a total of 87 people in 2014 and 78 in 2013. The woman was the ninth person to be executed by sword in 2015. Human Rights Watch's Adam Coogle, a Middle East researcher, revealed that 43 percent of the people who were beheaded in 2014 were foreigners, including two women.

43% of those executed in #SaudiArabia in 2014 were foreign nationals, including 2 women

Al-Saeedi emphasizes that the Saudi authorities have increased the number of public executions in order to demonstrate the Kingdom's power.

"They used to execute people in central areas of cities but since the beginning of 2014 they beheaded people all over the place," al-Saeedi said as cited by the MEE.

"The situation here in Saudi Arabia is dark. And it’s getting darker," he added gloomily.

IS Beheadings are "Barbaric": Al-Qaeda Leader