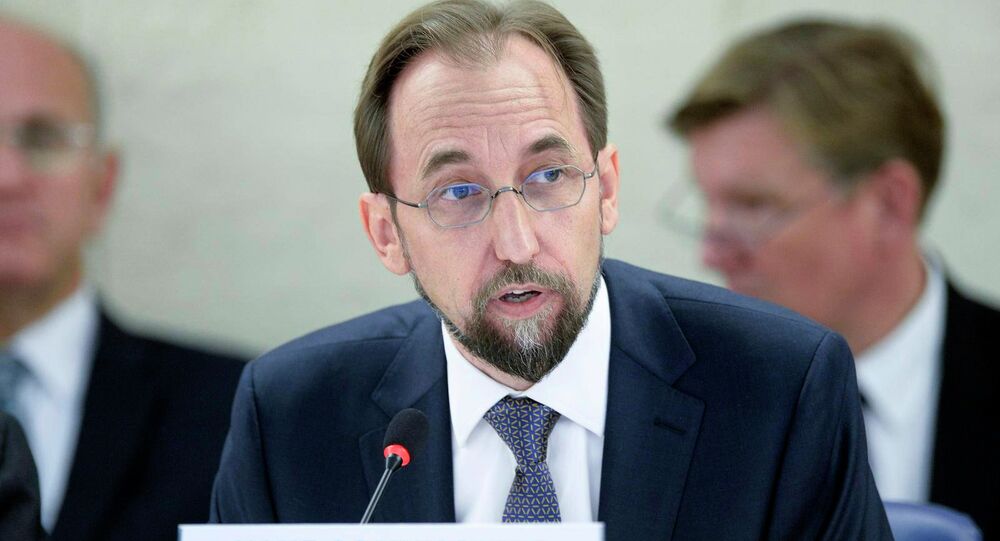 UN High Commissioner for Human Rights urged Saudi Arabia to halt the punishment of a Saudi atheist and rights blogger.

UNITED NATIONS, January 15 (Sputnik) – The UN High Commissioner for Human Rights Zeid Ra'ad Al-Hussein called on Thursday for Saudi Arabia to halt the punishment of Raef Badawi, a Saudi atheist and rights blogger who has been sentenced to 1,000 lashes for cybercrime.

Prince Zeid, who is a member of the royal family of Jordan, said on Thursday, "I appeal to the King of Saudi Arabia to exercise his power to halt the public flogging by pardoning Mr. Badawi, and to urgently review this type of extraordinarily harsh penalty."

© AFP 2021 / ASIF HASSAN
Human Rights Watch Condemns Public Flogging of Saudi Blogger Over His Views
Badawi was publicly flogged 50 times last Friday and is scheduled to be flogged 50 times again tomorrow and every Friday until his sentence of 1,000 lashes has been fully carried out. He was also sentenced to 10 years in prison and a fine of 1 million riyals ($266,000).

Prosecutors initially called for the atheist to be tried on charges of apostasy, an act of abandoning one's religion, which is punished by death in Saudi Arabia.

The UN right commissioner said that flogging, in his view, was "a form of cruel and inhuman punishment." "Such punishment is prohibited under international human rights law, in particular the Convention against Torture, which Saudi Arabia has ratified," Zeid stressed.

According to Zeid's Office of the High Commissioner for Human Rights, Badawi was convicted for "peacefully exercising his right to freedom of opinion and expression".

On Monday, an appeals court also upheld the conviction of Badawi's lawyer and brother-in-law Waleed Abu Al-Khair on charges that include offending the judiciary and founding an unlicensed organization.