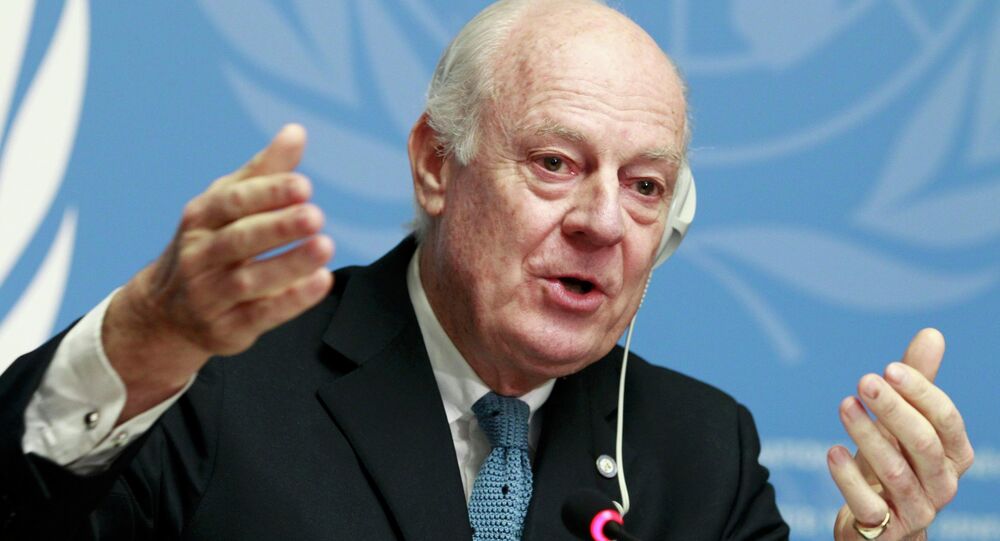 UN Special Envoy for Syria Staffan de Mistura stated that United Nations Deputy Envoy for Syria will continue discussions to achieve a ceasefire in the war-torn city of Aleppo during his visit to Damascus.

© Sputnik / Andrey Stenin
Russian Embassy in Syria Examining Execution Video of 'Undercover Agents'
GENEVA, January 15 (Sputnik) – The United Nations Deputy Envoy for Syria will continue discussions to achieve a ceasefire in the war-torn city of Aleppo during his visit to Damascus next Monday, said the UN Special Envoy for Syria Staffan de Mistura.

"So I am planing to have the ambassador Ramsey leaving early next week, based that we have been invited to come to Damascus. And we will then see how we follow up on our side," Staffan de Mistura said at a press conference in Geneva.

Mistura said he intended to pay visits to Damasсus more often to better assess the situation on the ground.

"We will be doing a lot of shuttling as we always do, but we will do it more intensely, in view of the fact that we would like to see a clear cut answer by both sides on Aleppo in order to be able to assess the situation of the freeze," the envoy stated.

Staffan de Mistura officially put forward an initiative on a local ceasefire during his visit to Damascus in November 2014, during talks with the Syrian President Bashar Assad. Assad said that the idea was worth studying.

Aleppo, Syria's largest city in the country's northwest, has been the scene of intense fighting since 2012, as rebel forces launched an armed campaign against government troops in an attempt to seize control over northern Syria. The fighting has resulted in thousands of deaths and forced around 200,000 people to flee the conflict.

According to United Nations estimates, the total number of casualties in the Syrian conflict since it began in 2011 has reached 200,000.