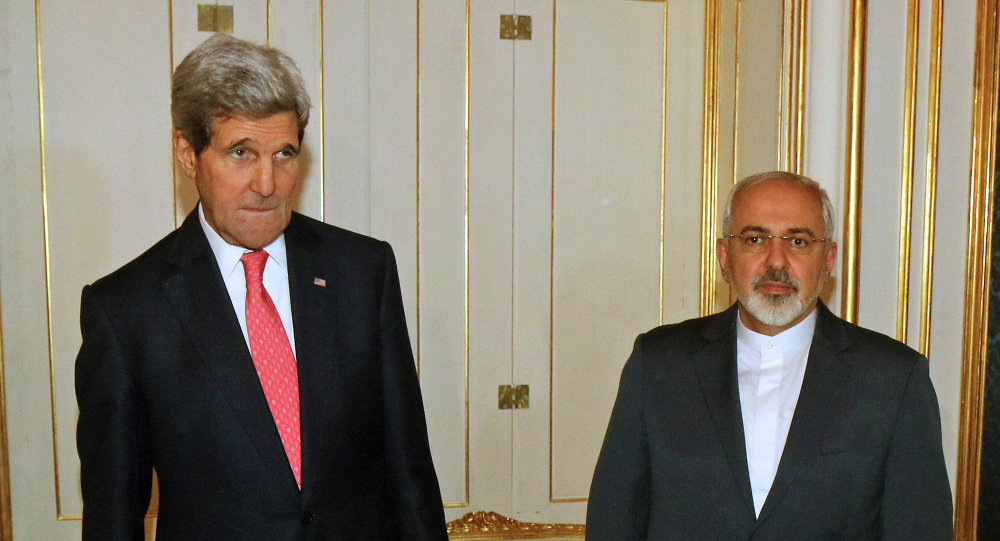 The Foreign Minister believes that negotiations should move forward toward a nuclear deal.

© AP Photo / Virginia Mayo
New Anti-Tehran Sanctions May Undermine Iran Nuclear Deal, Isolate Washington: US Envoy
MOSCOW, January 14 (Sputnik) – Iran’s Foreign Minister Mohammad Javad Zarif stated that he hopes for progress to be made in his meeting with US Secretary of State John Kerry ahead of a new round of negotiations on Iran’s nuclear program due to start on Thursday, AP reported.

"I think it's important. I think it will show the readiness of the two parties to move forward and to speed up the process," Zarif told Reuters briefly before his meeting with Kerry in Geneva.

Kerry did not talk to reporters, but had previously told the BBC that he and Zarif needed to "take stock" before Thursday’s round of negotiations.

© AP Photo / Ebrahim Noroozi
Iran Tries to 'Speed Up' Nuclear Talks With US Representatives in Geneva
On Tuesday, Zarif also told the newly-appointed Greek ambassador to Iran that he wants to see the European Union play a more active role in the negotiations, an Iranian daily, the Tehran Times reported.

Tehran has been slapped with sanctions imposed by the UN Security Council, the European Union, the United States and several other countries due to allegations that Iran is trying to produce nuclear weapons under the guise of a program to introduce nuclear power. The Iranian government has repeatedly denied such allegations, stating that Tehran’s nuclear activities are aimed purely at meeting the country’s growing energy needs.

© AP Photo / Ebrahim Noroozi
Moscow, Tehran to Discuss Iranian Nuclear Program on January 12: Diplomat
The P5+1 group of six world powers comprising Russia, the United States, the United Kingdom, France, China and Germany initiated diplomatic efforts back in 2006 in an attempt to reach a deal with the Tehran authorities which would ensure that Iranian nuclear program would not be used to create weapons. Since then, the group has held several meetings with Iran, but the sides failed to reach a compromise.

The latest round of talks between Iran and the P5+1 group, held in November in Vienna did not produce a comprehensive deal on Iran's nuclear program and the sides agreed to continue the discussions until July 2015.