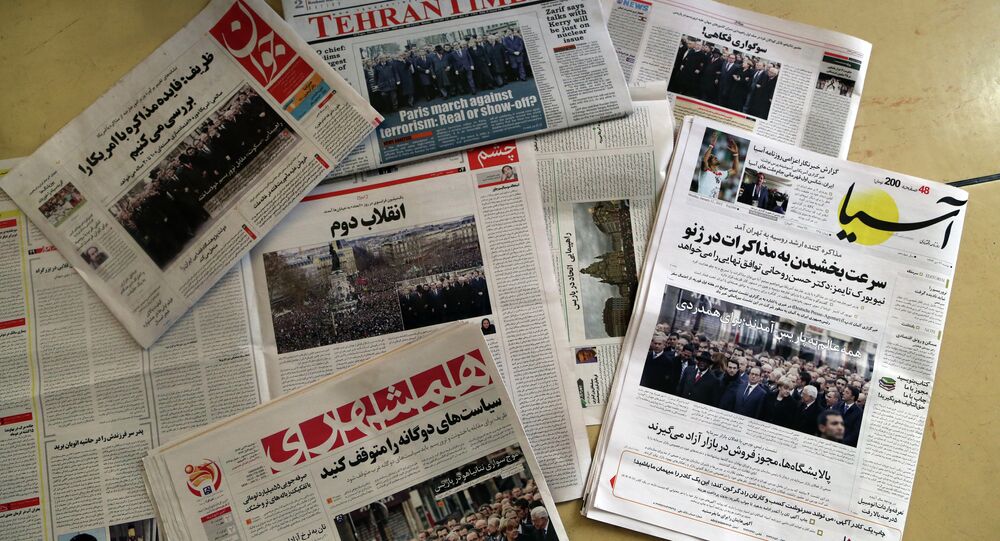 The French publisher's defiant move to publish an image of Prophet Muhammad has been condemned by the Iranian media and in official statements.

The new issue’s cover "provokes the emotions of Muslims and hurts their feelings around the world, and could fan the flame of a vicious circle of extremism," a spokeswoman from Iran’s foreign ministry announced at a press conference, according to AFP.

The decision to release the new cover, which features an image of the Prophet Muhammad, was also criticized by the Iranian media, with one private Iranian media outlet  stating that "Charlie Hebdo has again insulted the Prophet,” according to the Sydney Morning Herald.

© AFP 2021 / RONALDO SCHEMIDT
Charlie Hebdo to Keep Same Line After Terror Attack: Magazine’s Journalist
Iran’s international broadcaster PressTV was similarly critical of the publication, saying that "Neither the terrorists nor the provocateurs appear to care about the innocent victims who have been caught or may soon be caught in their cross-fire."

The decision to publish the cover, which features a caricature of Muhammad holding a sign which reads 'Je suis Charlie' (I am Charlie) and the caption "All is Forgiven", was previously criticized elsewhere in the Muslim world. The AFP reported that Charlie Hebdo’s decision to depict Muhammad on its cover was previously condemned by Egypt’s state-backed Islamic authority, Dar al-Ifta, which called it "an unjustified provocation against the feelings of 1.5 billion Muslims."

© AP Photo / dpa, Bodo Marks
German Newspaper Set Ablaze After Publication of Charlie Hebdo Caricatures
Three million copies of the new issue will be printed, compared to the usual print run of just  60,000. It will be available in six languages, including Turkish and Arabic, according to reports.

On January 7, the Paris office of Charlie Hebdo was attacked by gunmen. Twelve people were killed and 11 others were injured. Two of the terrorists who were responsible for the attack were killed police after an extensive manhunt. A third suspect turned himself in.

Shortly before the attack, the magazine posted a caricature of the Islamic State jihadist group's leader on its Twitter page. Charlie Hebdo had previously received threats from radical Islamists over its caricatures of the Prophet Muhammad.