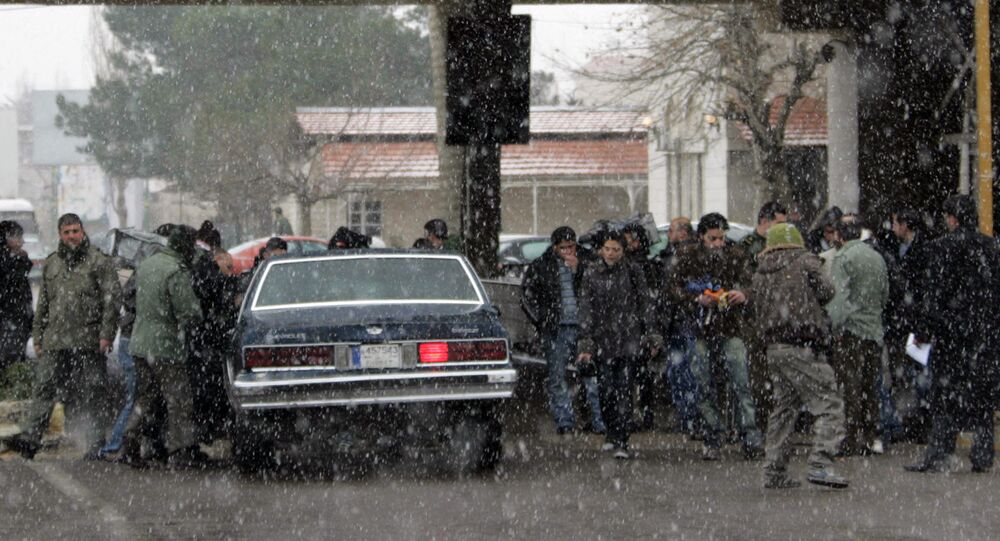 Heavy snowfalls and torrential rains have threatened to precipitate a humanitarian catastrophe among Syrian refugees living in Lebanon and Palestinians in Gaza.

MOSCOW, January 8 (Sputnik) — A rare and powerful series of winter storms have swept across North Africa and the Middle East, killing at least four refugees, including two children; they are threatening to precipitate a humanitarian catastrophe for Syrian and Palestinian refugees, Al Arabiya has reported.

The snowstorms, dubbed "Huda" and "Zina", have disrupted life across the region, particularly for the estimated 1.1 million Syrian refugees currently living in Lebanon, including an estimated 400,000 who live in makeshift tents and shelters in the northeast of the country. Refugees have been reported to be running out of heating materials, and have been using brooms and sticks to try to clear the 50 centimeters of snow that are said to have fallen in the Beqaa Valley over the past several days.

"We spend all our time clearing the roof of the tent so it doesn't fall on us. We have to do it every five minutes," Arsal refugee Abu Mohammad told Lebanon's The Daily Star, saying residents have been forced to stay awake for days to keep their tents free from snow. At least three tents are reported to have collapsed, leaving 19 people without shelter, The Guardian reported Wednesday.

© REUTERS / Nour Fourat
Syrian Conflict Consumes 50% of Aid Agencies 2015 Humanitarian Budget: UN
The refugees, who are running out of heating oil and wood, have resorted to burning lumber, waste paper, rags, and even clothing and linen to survive, The Daily Star explained. Refugee Abu Jassem told The Daily Star that "people are setting fire to anything they can find, including clothes, to keep warm. It is a most tragic situation." Another refugee, Umm Mohammad, told the paper that "we haven’t left the tent for three days," adding that "we're burning rags instead of heating oil to keep our stove lit…The children are all cold." Shebaa mosque keeper Sheikh Mohammad Jarrah noted that after running out of wood, refugees have resorted to "burning sheets and mattresses."

"I've been a refugee here for two years but this is the worst winter I've seen," said Mohammad al-Hussein, as quoted by Agence France-Presse. "We feel humiliated," he added.

A Syrian shepherd, Ammar Kamel, 30, and 7-year-old boy Majed Badawi died in the storm on Wednesday as they attempted to cross the Lebanese border in the southern region of Shebaa in temperatures that reached minus 7 degrees. Another man traveling with them was also reported to have died, The Daily Star reported on Thursday.

© REUTERS / Muhammad Hamed
Russia to Continue Sending Humanitarian Aid to Syria: Foreign Ministry
Relief efforts in the refugee-filled country have been hampered by road closures, including the closing of the Dahr al-Baidar highway, a major artery which links northeastern Lebanon to the Mediterranean Sea coast. Norwegian Refugee Council director Niamh Murnaghan noted that "with roads impassable in the Beqaa, our staff have not been able to reach refugee settlements." UN Refugee Agency staff have noted that road closures have also affected some of their operations, although they "are continuing to work throughout the storm." Oxfam program manager Lauriane Gauny told Reuters that now fears are emerging that the refugee tents will be flooded, with the water supply also a problem. "Refugees who don't have proper access to clean water or can't store drinking water will be in severe difficulties if we don't reach them in the next two days," she said on Wednesday. UN authorities had launched a campaign to hand out cash and fuel coupons to more than 80,000 refugee families ahead of the storm.

Gaza's authorities have declared a state of emergency as a result of the storm, with an 8-month-old infant at the Tulkarem refugee camp reported to have been killed in a fire caused by a faulty heating stove. Torrential rains and temperatures near freezing added to the misery in the Gaza strip, still recovering from the 50-day war with Israel last summer. The thousands of people living in temporary shelters and damaged homes with no electricity or clean drinking water have been particularly hard hit.

© Sputnik / Alexey Kudenko
Russian Humanitarian Aid to Be Distributed Among Gaza Hospitals
"No electricity, no drinkable water, no reconstruction, and now a storm. Our people need the help of the entire world," Samir Ali, a Gaza taxi driver, told Reuters.

A part of the territory's coastal areas have been evacuated due to storm surges, and a UN relief effort has been working to distribute food and generators to ease chronic electricity shortages faced across the territory.

The storm has also resulted in the closure of roads, schools, universities, and seaports and airports across the region, from Egypt to Israel, Syria and Lebanon, with waves of up to five meters and high winds closing five Egyptian ports on the Red Sea and Syria's Tartous and Latakia ports. In Israel and the West Bank, people rushed to stock up on food supplies and gas and paraffin heaters, while the Israeli army was called in to help deal with the storm, which left over 17,000 homes without power on Wednesday.