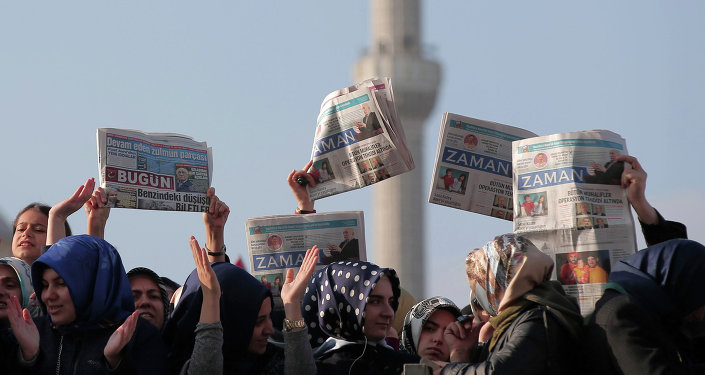 Erdogan has repeatedly blamed Gulen for trying to overthrow his government through a series of protests in 2013.

"The cost of the Dec. 17 and Dec. 25 coup [2013] attempts to Turkey were $120 billion," Erdogan was quoted as saying by the news agency. "The parallel state will be put on the list of threats to national security."

The announcement comes as the Parliamentary Investigation Commission decided on Monday not to send former ministers accused of corruption in 2013 to Turkey's Supreme Court for trial. Erdogan has repeatedly blamed Gulen for plotting the 2013 graft scandal.

© AP Photo /
Increased Attention of Turkish Government Toward Media Quite Understandable: Turkish Journalist
The Turkish Grand National Assembly is due to make its final decision on whether ex-ministers will be tried on January 9, according to the agency.

"The Parliament will give its final decision in the most ideal and fair manner," Erdogan added.

In December 2013, Turkish authorities conducted an anti-corruption operation that resulted in a number of officials, businessmen and their relatives being arrested over suspicions of fraud, bribery and abuse of power. Economy Minister Zafer Caglayan, Interior Minister Muammer Guler, European Affairs Minister Egemen Bagis and Environment and Urban Planning Minister Erdogan Bayraktar all resigned after being accused of corruption