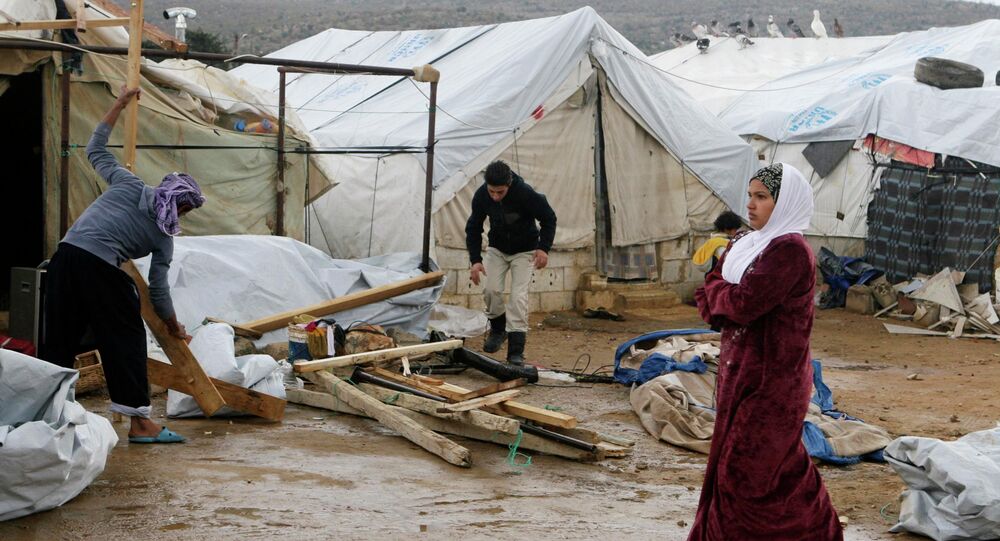 New camp is to house over 30,000 refugees from Kobane, the Syrian town from which almost 200,000 have arrived in Turkey since September.

© REUTERS / Muhammad Hamed
Turkey Shelters Almost 200,000 Refugees From Syria’s Kobani
MOSCOW, December 21 (Sputnik) – Turkey has begun the construction of a new refugee camp in the southeast of the country, which will house tens of thousands of Syrians fleeing from violence, the country's Disaster and Emergency Management Presidency (AFAD) told Al-Jazeera.

"The camp will offer educational institutions, from middle school to high school, along with a fully functioning hospital," the agency quotes Mahmut Sonmez, AFAD head for the province of Sanliurfa, as saying. The facility is planned to open in mid-January and house 32,500 people.

On Saturday the AFAD released data showing that 192,417 people from the area of Kobane have arrived in Turkey to take refuge since the conflict there began on September 19, according to the Turkish Hurriyet Daily News. In the vicinity of the Turkish town of Suru, an average of 70,000 meals are delivered to refugees daily, and 27,850 people injured in Kobane have been treated in a local hospital.

© AP Photo / Vadim Ghirda
Turkey Accepting Refugees From Syria Regardless of Nationality: Official
Syrian refugee Abdulkadir Kanur explained to Al-Jazeera that despite being appreciative of the government's provisions, those living in the accommodation would prefer to return home. "We have been through too many camps. I would like to go back to my hometown of Kobane even if they (the Turkish Government) give me a house to live in here," said the farmer, who is staying in the area with his seven children.

The Turkish government estimates the total number of Syrian refugees in the country to be more than 1.6 million, an estimated 217,000 of whom are staying in 22 refugee camps. The UN's refugee agency (UNHCR) reports that funding requirements of almost $500 million earmarked for Turkey in 2014 to meet the cost of hosting the refugees have only been met by 29% of the total required.

Although the UNHCR's operational budget for Turkey has increased to $320.16 million for 2015, but according to Amnesty International, "the humanitarian assistance offered by the international community has been pitifully low." The organization reports that Turkey has borne a considerable part of the financial cost of the refugees, and the Turkish government says it has spent $4 billion on hosting the refugees.