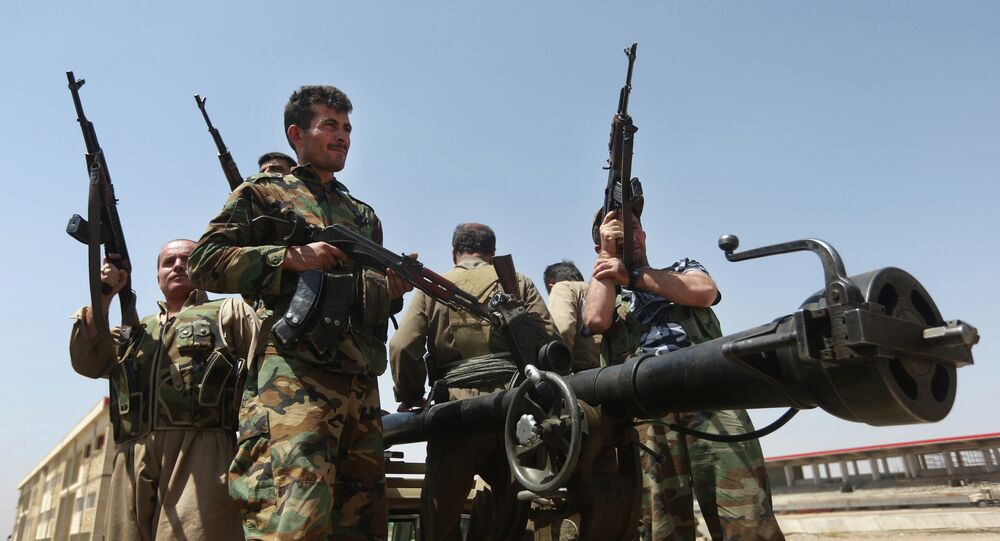 Kurdish forces have allegedly broken the siege of Mount Sinjar in northern Iraq, where members of the Yazidi minority have been trapped for several months, dealing a major blow to the radical Sunni group.

MOSCOW, December 19 (Sputnik) — Peshmerga forces assisted by a US-led international coalition managed to break the siege of Mount Sinjar, where thousands of Yazidis have been trapped since mid-summer, Iraqi Kurds claim, according to AFP.

United Nations Consider Islamic State Actions Against Yazidis to Be Attempted Genocide
"Peshmerga forces have reached Mount Sinjar, the siege on the mountain has been lifted," said Masrour Barzani, the son of the Kurdish president and chancellor of the Kurdistan Region Security Council, as quoted by the news agency. If verified, this represents a major blow to the radical Sunni group, still controlling large swathes of land in Iraq and Syria.

8,000 Peshmerga fighters took part in the operation, which Barzani referred to as "the single biggest military offensive against IS and the most successful," according to a statement issued by his office. Eight villages are said to have been captured in the assault launched on Wednesday. 80 IS militants were killed in the operation.

On Friday, Kurds are expected to start an evacuation of Yazidi civilians through a corridor northeast of Mount Sinjar. "Tomorrow most of the people will come down from the mountain," Mohamed Kojar told AFP.

However, the town of Sinjar remains in the hands of Islamic State. It was captured in August, resulting in thousands of Yazidis fleeing to a nearby mountain, which was later surrounded by IS militants. The Yazidis were left to die in the siege, prompting the US to launch an airstrike campaign against the group. Although some of those trapped were airlifted from the mountain in August, as many as 10,000 remain there to this day, according to Al Jazeera.

General Martin Dempsey, chairman of the US Joint Chiefs of Staff, called the IS militants killed in the airstrikes "high-value targets, senior leadership" in an interview with the Wall Street Journal. They include Abd al-Basit, head of IS military operations in Iraq, Haji Mutazz, a key aide of IS leader Abu Bakr al-Baghdadi, and Radwin Talib, IS governor of the northern Iraqi city of Mosul, the group’s stronghold in Iraq.