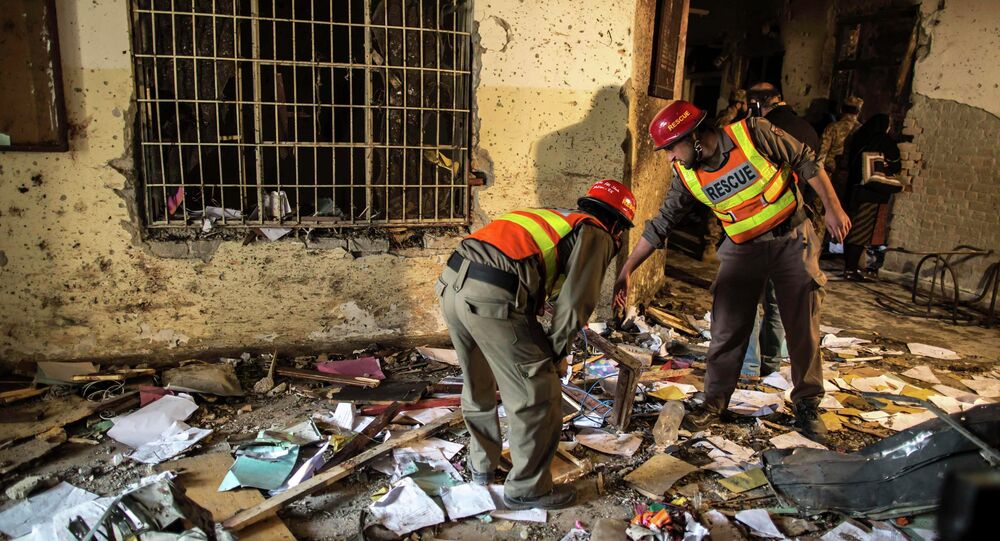 At least 141 students and teachers were killed during Tuesday's attack by Taliban gunmen on the Army Public School in Pakistan.

© REUTERS / Ahmad Masood
Developing: At least 126 Killed, 122 Wounded in Taliban Attack on Pakistani School
December 16 (Sputnik) – The death toll in Tuesday’s attack on a northwest Pakistan school where up to 400 students and teachers had been taken hostage by militants has risen to 141 students and teachers, with 7 militants dead, the BBC reports, citing the Pakistani army.

The army spokesman noted at 4:09 GMT that 132 children and 9 members of the staff were killed following an attack by Taliban militants on the Peshawar school. Over 100 children and staff are also said to be injured, many suffering gunshot wounds, CNN noted.

The country’s security forces say that their operation to secure the area had been concluded, with all of the attackers left dead, and that they were now searching for survivors and disabling any booby-traps which the attackers may have set up over the course of their attack.

© REUTERS / Khuram Parvez
Pakistani Tragedy Result of Permissive Attitude Towards Religious Violence
The army spokesman also confirmed that the attackers made no demands, starting to kill students as soon as they had entered the school, Reuters reported. This confirms earlier reports by students who had managed to escape the besieged school. Pupils said earlier that the gunmen had gone from classroom to classroom indiscriminately shooting children while shouting “God is Great”.

The Taliban has said that the attack was a response to Pakistani army operations in North Waziristan and the Khyber area.

Pakistan’s Prime Minister Nawaz Sharif has called the attack a national tragedy, telling Pakistani newspaper Dawn that “unless this country is cleansed from terrorism, this war and effort will not stop.”

Indian Prime Minister Narendra Modi expressed his heartfelt sympathy to Pakistan over the tragedy, noting that in India “we share their pain [and] offer our deepest condolences,” and that the attack was “a senseless act of unspeakable brutality,” claiming the “lives of the most innocent of human beings –young children in their school.”

UN High Commissioner for Human Rights Zeid Ra’ad al-Hussein has accused the Taliban of “sinking to an all-time low,” saying its ideology “bears no resemblance to any religion or any cultural norms.”

The Guardian has explained that the attack has now become the worst terrorist attack in Pakistan’s history, surpassing the number killed in the Meena Bazaar bombing attack of 2009, which took the lives of 137 people and injured over 200 others.