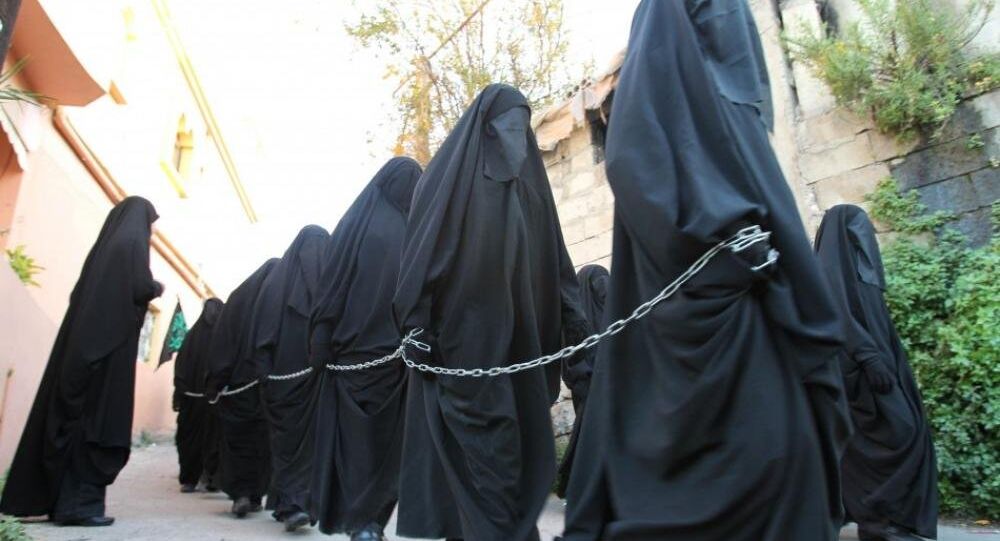 The Research and Fatwa Department of the Islamic State has released guidelines on interaction with non-Muslim female slaves, equating them to disposable property, allowing them to be beaten but however putting some restrictions on their use.

MOSCOW, December 14 (Sputnik) –  The Research and Fatwa Department of the Islamic State has released what it calls a Pamphlet on Female Slaves.

The manual, written in the form of a Q&A, has been translated by the Middle East Media Research Institute, a Washington-based non-profit press monitoring organization, and posted on its website.

Amongst other revelations, the Pamphlet equates female captives to disposable property and allowing them to be put up for sale.

"It is permissible to buy, sell, or give as a gift female captives and slaves, for they are merely property, which can be disposed of [as long as that doesn't cause [the Muslim ummah] any harm or damage," it says.

© AP Photo / Dalton Bennett
In this photo taken on October 8, 2014, a 15-year-old Yazidi girl captured by the Islamic State group and forcibly married to a militant in Syria.

If the owner dies, the manual says, his captives are to be distributed as part of his estate.

"Female captives are distributed as part of his estate, just as all [other parts] of his estate [are distributed]. However, they may only provide services, not intercourse, if a father or [one of the] sons has already had intercourse with them, or if several [people] inherit them in partnership."

It also allows the beating of a slave, however, it forbids hitting them in the face.

The manual also puts restrictions on having sexual intercourse with a captive woman, forbidding sex with the slave if she is not owned exclusively.

"It is forbidden to have intercourse with a female captive if [the master] does not own her exclusively. One who owns [a captive] in partnership [with others] may not have sexual intercourse with her until the other [owners] sell or give him [their share]."

The Pamphlet also states that running away from the master is "among the gravest of the sins."