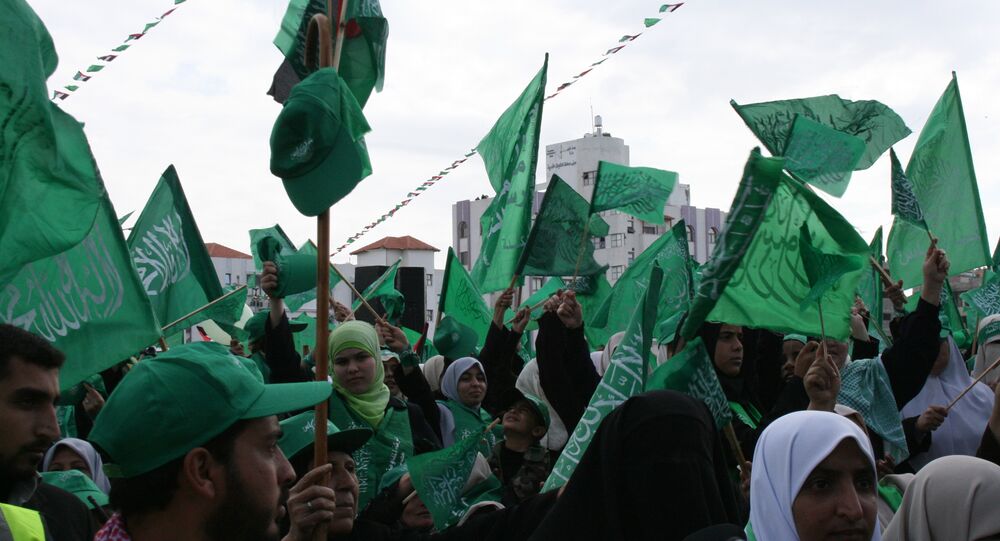 Hamas was formed on the basis of two groups operating in Gaza and officially registered as cultural and educational charities: an offshoot of the Muslim Brotherhood in the West Bank and Gaza Strip, and the Islamic Jihad – in the Palestinian territories.

The Hamas Charter adopted in August 1988 laid the ideological foundation for the movement. The Charter states that the movement's purpose is the creation of a Palestinian state on the territory of today's Israel, the West Bank and the Gaza Strip. One of the main demands of Hamas is the withdrawal of Israel from the territories it occupied in 1967.

Since the early 1990s, Hamas was undergoing rapid radicalization conditioned both by the rise of Islamic movement in the Muslim world, and the beginning of the second Palestinian Intifada (an Arabic term for the Palestinian uprising against Israel). In 1992, Hamas formed a military wing — the Izz ad-Din al-Qassam Brigades named after a famous participant of the Palestinian Arab national movement.

The political wing of the movement conducts propaganda and recruits new members through mosques and social institutions.

The legal wing finances the social sphere, funding hospitals and schools, arranging athletic competitions and cultural events, and setting up charity foundations for helping the poor.

The military wing conducts military operations. The number of armed fighters, according to different estimates, varies from 7,000 to 15,000.

Hamas is mainly funded from abroad. Its branches, disguised as charities, collect funds and recruit supporters all over the world. The organization is financed by Iran, Saudi Arabia, Pakistan, Kuwait, and other Gulf states.

During the second Intifada, the Hamas combat units widely used terror against Israeli civilians. They have been shelling the territory of Israel, while recruited suicide bombers have been blowing up in Israeli cities' public places.

The United States and the United Kingdom have included Hamas in the lists of terrorist organizations; Jordan has shut down the movement's bureau in Amman and deported the members of the Hamas Political Bureau. In 2003, EU foreign ministers also recognized Hamas as a terrorist organization. They started to persecute the movement's members in different countries, freezing the accounts of Hamas' branches.

Sheikh Yassin, the leader of the movement, was killed in Gaza by an Israeli missile on March 22, 2004. On April 17, his deputy Abdel Aziz Rantisi died under similar circumstances. After Palestinian leader Yasser Arafat's death in 2004, the new Head of the Palestinian Authority Mahmoud Abbas managed to make the Hamas leadership agree on a ceasefire with Israel.

Hamas boycotted the January 2005 presidential election in Palestine. However, it did run in the municipal election in May 2005 and had a certain success by getting the majority of votes in such large cities as Bethlehem in Gaza, and Ramallah and Kaliliya on the West Bank.

Hamas performed surprisingly well at the January 2006 parliamentary election, winning 74 of the 132 seats in the Legislative Council (parliament) of the Palestinian National Autonomy.

Following the election, Hamas appointed its Political Bureau member Ismail Haniyeh as the prime minister. He succeeded a Fatah (a secular Palestinian party and former guerrilla movement founded by Arafat) representative who resigned with all his Cabinet members.

On February 8, 2007 Fatah and Hamas signed an agreement in Saudi Arabia's Mecca on forming a national unity government of Palestine. Ismail Haniyeh was appointed prime minister of the new government.

© Flickr / Joi
Anniversary of Palestinian State Proclamation: Timeline and Facts
The Cabinet with Ismail Haniyeh as its head was approved at a sitting of the Palestinian Legislative Council (PLC) on March 17, 2007.

After violent clashes that erupted in June 2007 between Fatah and Hamas, Head of the Palestinian National Authority Mahmoud Abbas declared an emergency situation in the Palestinian territories on June 16 and formed a new government headed by Salam Fayyad with no Hamas ministers the following day.

On May 4, 2011 Fatah and Hamas signed another agreement in Cairo on forming a united government made up of "independent technocrats," and also agreed on holding presidential and parliamentary elections in one year.

The groups also agreed to restructure the Palestine Liberation Organization and to release political prisoners from Hamas and PNA prisons.

The reconciliation agreement was suspended due to disputes, the main one being the formation of the joint Cabinet of the PNA and the release of imprisoned Fatah and Hamas supporters from the prisons in Gaza and in the West Bank.

In May 2014, Hamas and Fatah formed a coalition government.

In late September, the leaders of the two movements reached an agreement on joint control of Gaza. On October 9, Rami Hamdallah, Prime Minister of the Palestinian Government of national unity, made a first visit there.

On July 7, 2014 Israel launched Operation Protective Edge in order to destroy the Hamas military infrastructure and to prevent missile attacks of the Israeli territory. Following weeks of airstrikes, a ceasefire agreement was signed on August 26 for an indefinite period of time.

The last terrorist act Hamas officially took responsibility for was a suicide driver's attack in Jerusalem on November 5, 2012 resulting in one dead and 13 wounded.

The European Union, Israel, Canada, the USA and Japan treat Hamas as a terrorist structure. It is banned in Jordan. However, only the military wing of this organization is included in Australian and UK lists of terrorist organizations.

Hamas leaders have visited Russia a number of times in the past years and discussed the situation in the Palestinian territories with the Russian leaders.

On December 17, 2014, the European General Court, a branch of the European Union's Court of Justice, removed the Islamic Resistance Movement Hamas (Harakat al-Muqawama al-Islamiya) from its list of terrorist organizations.

The court ruled that maintaining Hamas on the list was based on "factual imputations derived from the press and the Internet" rather than acts confirmed by competent authorities. However, the Luxembourg-based court upheld temporary measures freezing the organization's assets for the next three months and left the possibility of an appeal to the European Court of Justice within two months of Wednesday's ruling.

The European Union has maintained Hamas on its list of terrorist groups since December 2001. The organization has brought a court order against the European Council in 2010 seeking the annulment of the decision.