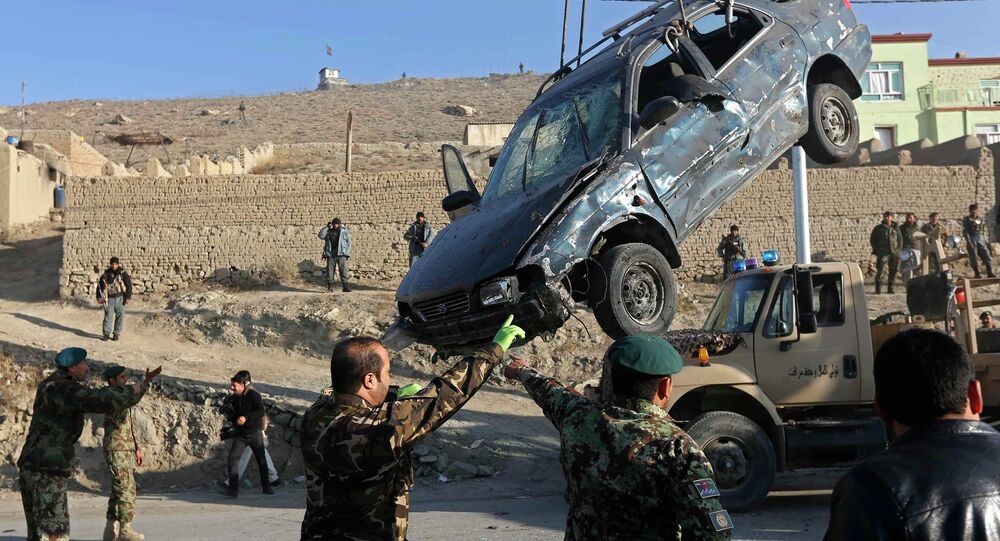 MOSCOW, December 11 (Sputnik) — At least five soldiers were killed and 12 people injured by a suicide bomb near Kabul on Thursday, the Afghan Defense Ministry said.

There are civilians among the 12 injured, the ministry confirmed, as reported by United Press International (UPI).

© REUTERS / Omar Sobhani
Kabul Police Chief Quits Amid Series of Attacks Against Afghan Capital
The suicide bomber hit a bus carrying Afghan National Army soldiers on the outskirts of Kabul during the morning rush hour, according to Afghan officials.

It was the first attack in the Afghanistan capital in over a week, suggesting a renewal of the tense rebel campaign against the government.

US Army / SPC Gul A Alisan
Taliban Bomber Attempting to Strike NATO Convoy in Afghanistan Killed
The Taliban claimed responsibility for the attack. Taliban bombers regularly carry out attacks targeting military, diplomatic and foreign sites in the city and suburbs of Kabul.

In November, the Taliban claimed responsibility for a suicide attack during a sporting event in the eastern province of Paktika that resulted in the death of more than 50 people, mostly civilians, the WSJ reported.

More than 4,600 Afghan soldiers and police have been killed this year as a result of Taliban-led attacks. Afghanistan has long been fighting the Taliban movement as well as other insurgent groups acting in the country. As US-led NATO forces are preparing to leave the war-torn country, Afghanistan is facing growing violence.