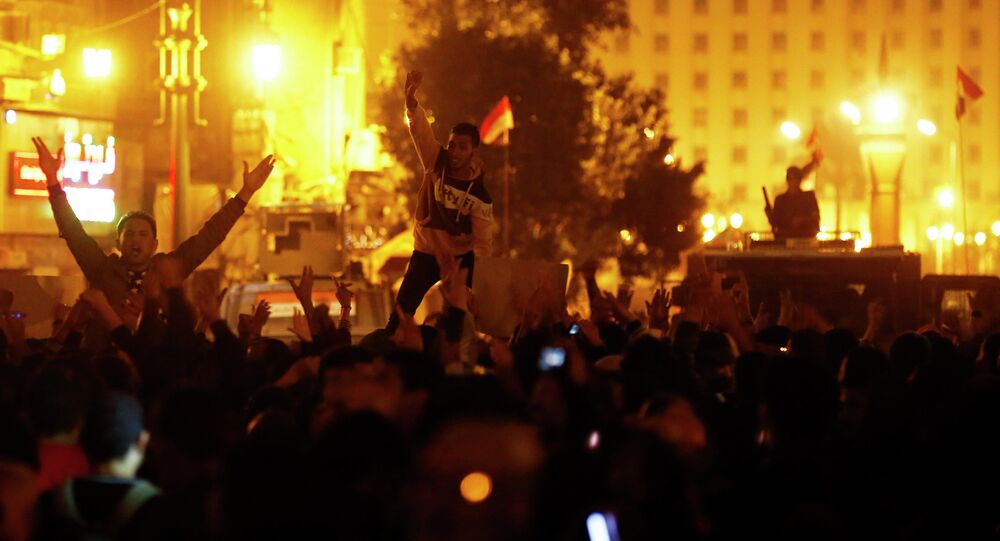 Police Leave Two Dead in Clashes With Protesters in Cairo

At least two people have reportedly died and nine were injured when police attempted to put down a demonstration in Cairo.

MOSCOW, November 30 (Sputnik) – At least two people died and nine others were reportedly injured in clashes between Egyptian police and demonstrators in Cairo, RT TV channel said on its website Sunday.

According to RT, police used water cannons, tear gas and riot control vehicles against hundreds of people protesting against the verdict of the court that found former Egyptian president Hosni Mubarak not guilty of killing protesters during the 2011 anti-government uprising.

RT's Bel Trew reported that live fire was allegedly used by police in Cairo on Saturday. People in the streets told Trew that the attacks by police were unprovoked, contrary to what the Egyptian law enforcement said in a statement, claiming that members of the banned Muslim Brotherhood organization have infiltrated the ranks of the demonstrators and that the attacks were thus justified.

The Saturday protests came after the Cairo Criminal Court dismissed charges against Mubarak, as well as former Egyptian Interior Minister Habib al-Adly and six Interior Ministry's senior officials, of conspiring to kill more than 200 protesters in 2011, during the Arab Spring revolution that forced the long-standing leader from power. Moreover, Mubarak and his sons were also cleared of charges of corruption.

In June 2012, Mubarak and al-Adly were sentenced to life imprisonment by the Cairo Criminal Court. However, in January 2013 Egypt's Cassation Court appointed a new hearing, allowing former president's appeal. Mubarak denied all the accusations against him.