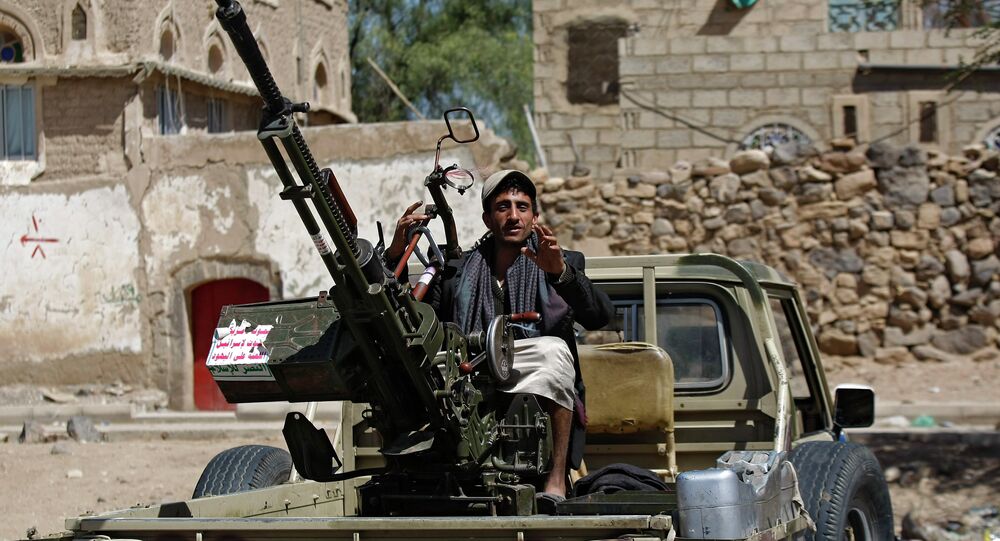 US Used Al-Qaeda in Yemen to Blackmail Sanaa: President’s Adviser

Yemeni president’s adviser Saleh Samad stated that US used the presence of al-Qaeda affiliated terrorist cells in Yemen to blackmail the government in Sanaa.

“Political vacuum in the country at the time when the government was being formed prevented authorities from taking drastic measures and declaring war on terror. The United States used al-Qaeda to blackmail the Yemeni government and impose its diktat authority,” the adviser said.

Samad, who is a key figure in Houthi movement, told RIA Novosti he believed the government must do everything to preserve Yemen’s sovereignty and integrity of its territories, when it comes to US interference and the use of drones to kill terrorist suspects on the Yemeni soil.

In 2012, anti-government protesters in Yemen forced autocratic President Ali Abdullah Saleh to step down after 33 years in power.

Following the power transition in the country, Yemen has seen an increase in terrorist activity, particularly by al-Qaeda fighters. The United States is the only country carrying out UAV operations in the region, after US President George W. Bush launched a drone campaign to eradicate terrorists in 2004.

Iran does not secretly back or finance Yemen’s Houthi movement Ansar Allah that has become part of the national unity government following a series of protests in August, Yemeni president’s adviser from the Houthi organization told RIA Novosti Friday.

Saleh Samad, a key figure in Ansar Allah which translates as “Partisans of Allah”, dismissed the claim that Tehran and Houthis have been working together as “provocations of Saudi Arabia and Americans that are carried out with the help of media campaigns to disseminate the information about our alleged links with Iran”.

Gulf Arab states have accused Iran of providing financial and ideological assistance to Houthi Shiite rebels from a northern Yemeni province, while news agencies have been reporting about Yemeni coast guards intercepting ships from Iran that purportedly carried weapons and military equipment for the Houthis.

“No evidence of this has been presented so far. We share a common goal with the Iranians, Palestinians and the Lebanese which is to oppose the US-Israeli project,” Samad told RIA Novosti.

The Houthis, the main opposition force in Yemen, have been carrying out protests in the country since mid-August, demanding the resignation of the Yemeni government. Houthi militias have taken over many Yemeni cities, including areas of the capital Sanaa. The fighters claim their actions are aimed at protecting civilians from terrorism.

The Houthi Shiite movement in Yemen has pledged to continue demanding that the newly-formed unity government in Sanaa be reshuffled, a bid they expect to be backed by Yemeni President Abdrabuh Mansur Hadi, the president’s Houthi adviser Saleh Samad told RIA Novosti Friday.

“We still want [a Cabinet reshuffle], and are calling on the president and the prime minister to act on the people’s demand in good faith… A dialogue is better than forcing people to resort to other means [of political struggle],” Samad said.

Earlier in November, the Houthi rebels in Yemen rejected the new government lineup and called for the Cabinet reshuffle, saying it did not meet the “criteria of the peace and national partnership agreement”.

The formation of a new, technocratic government was announced on November 7, as a result of the UN-brokered deal involving the Houthi movement. The United Nations praised the agreement that also called for immediate end to violence in the country.

Hostilities in Yemen have been raging since the 2011 Yemeni revolution that toppled President Ali Abdullah Saleh and started power transition. The Houthis, the main opposition force in Yemen, have been protesting in the country since mid-August, urging economic and political reforms.

In September, Houthi rebels overran many Yemeni cities, including areas of the capital Sanaa. The fighters claim their actions are aimed at protecting civilians from terrorism.