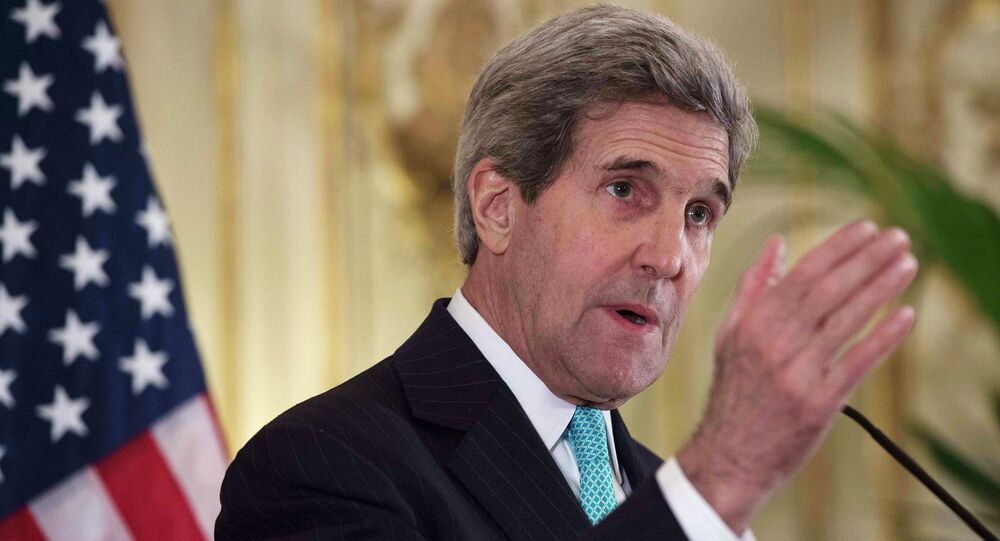 The US Secretary of State said at his speech in Washington on Monday that the US airstrikes against the Islamic State, criticized by some Syrian opposition groups, will not assist the regime of Syrian President Bashar al-Assad.

WASHINGTON, November 17 (Sputnik) — US airstrikes, targeting the Islamic State (IS) will not assist the regime of Syrian President Bashar al-Assad, US Secretary of State John Kerry said at a speech in Washington on Monday.

“Some believe that airstrikes against ISIL in Syria will have a perverse effect of actually assisting the country’s longtime dictator Bashar al-Assad,” Kerry said at the third annual Transformational Trends policy forum.

“That assumption is based on misreading the political reality in Syria,” Kerry added.

The US Secretary of State presented as evidence claims that the Syrian regime bombs the “moderate” opposition, but does “almost nothing” against IS, also known as ISIS or ISIL.

“Assad and ISIL are symbiotic. ISIL presents itself as the only alternative to Assad. Assad purports to be the last line of defense against ISIL. Both are stronger as a result,” US Secretary of State said.

The airstrikes against IS and the al-Qaeda linked al-Nusra Front have been criticized by some Syrian opposition groups, Turkey and Qatar. They argue airstrikes should target the Assad regime, and by targeting only IS they are helping Assad by allowing regime forces to concentrate on Free Syrian Army-linked opposition groups.

The US-led international coalition fighting the IS has been launching airstrikes on Syria since September. The strikes target primarily towns along the Syrian-Turkish border, where IS positions are concentrated, while the Kurdish fighters defend the area.

IS Militant ‘Jihadi John’ Wounded in US Airstrike: Reports