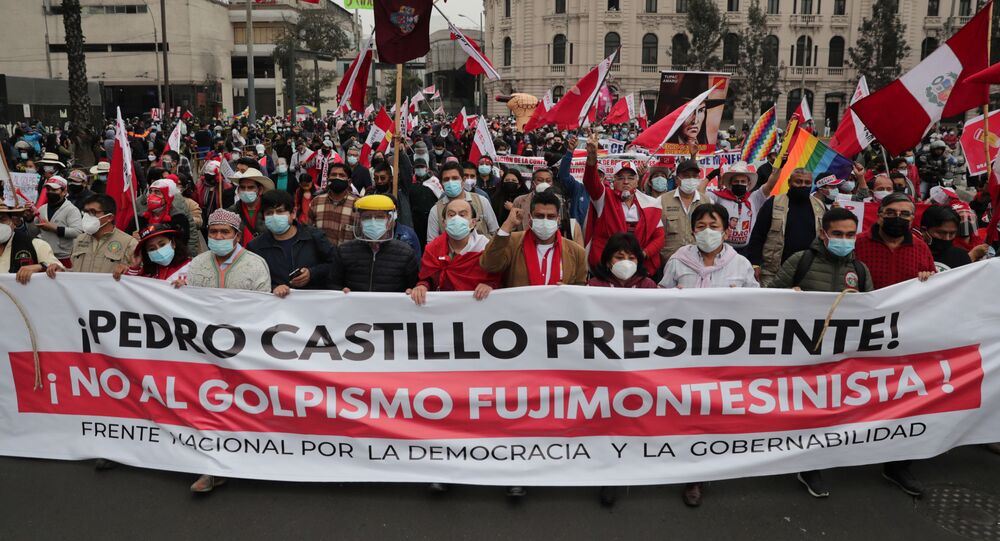 When she lost the 2016 presidential elections to ex-Wall Street financier Pedro Pablo Kuczynski by a small margin, Fuerza Popular candidate Keiko Fujimori tried to get some 42,000 votes annulled, reversing the vote. This past February, just months before the most recent election, she opined that she hadn't pressed harder for a recount.

On Monday evening, Peru's National Jury of Elections (JNE) formally named Pedro Castillo, a socialist from the Peru Libre party, the winner of the June 6 election.

Following his victory, Castillo posted a statement on Twitter thanking the Peruvian people for his victory.

"Thank you Peruvian people for this historic triumph! The time has come to call on all sectors of society to build together, in this Bicentennial, an inclusive Peru, a just Peru, a Free Peru. Without discrimination and for the rights and all," he said. "We call on the Afro, coastal, Andean and Amazonian peoples, the working class and their unions, the native and peasant communities and all of society to make this homeland beautiful. Today, sisters and brothers, a new stage in our history begins."

Castillo is a union organizer, schoolteacher, and farmer, who has called for using the country's resources to better the lives of poorer Peruvians, including the indigenous population often left out of policy decisions made in Lima, on the coast.​

Fujimori Calls for 'Defense of Democracy'

Earlier on Monday, eight-wing candidate Keiko Fujimori admitted to defeat after more than a month of contesting the June 6 presidential election. In a television address, she said she said she "will recognize the results because it is what the law and the Constitution that I have sworn to uphold."

"Peru Libre has stolen thousands of votes from us on election day," Fujimori said of Castillo's party. She called for large protests against what she described as his "imminent and illegitimate" declaration of victory.

"I call on the entire country to enter a new phase with all the rights that the law and the Constitution give us. I call on Peruvians not to give up and to move forward by launching a great defense of democracy," Fujimori said.

Seven Weeks of Disputing the Vote

​Earlier in the presidential race, Fujimori had taunted Castillo and his party, Peru Libre, for raising allegations of fraud. However, once the ballot count in the second round of elections on June 6 began to turn against her, Fujimori began attributing the changing winds to fraud, despite not having evidence of fraud. She sought the discarding of hundreds of thousands of ballots, which had the potential to reverse the result, since Castillo was 44,000 votes ahead.

International observers reported no evidence of fraud, either, even those like the Organization of American States that in the past have readily resorted to such accusations in order to run interference against socialist or left-wing candidates winning elections.

Indeed, Fujimori's summoning of supporters into the streets to contest the vote outside of normal democratic structures is reminiscent of the protests called by right-wing figures in Bolivia in October and November 2019, which resulted in the overthrow of socialist President Evo Morales in spite of his victory in the elections.

The JNE said on Twitter on Monday afternoon that it had dismissed five appeals by Fujimori's Fuerza Popular party and the body would "proceed to the preparation of the act of proclamation of general results."

Keiko Fujimori is the daughter of right-wing ex-dictator Alberto Fujimori, who ruled Peru from 1990 until 2000. His tenure was associated with harsh neoliberal economic reforms, privatizations, and political terror, including a counterinsurgency war against the Maoist Shining Path movement. The elder Fujimori has been in prison since 2007 and Keiko promised to pardon him if elected president. Many of the elements of his government continued to support his daughter, including his spy chief, Vladimiro Montesinos, who was revealed late last month as having attempted to bribe the JNE to rule Keiko Fujimori was the winner.