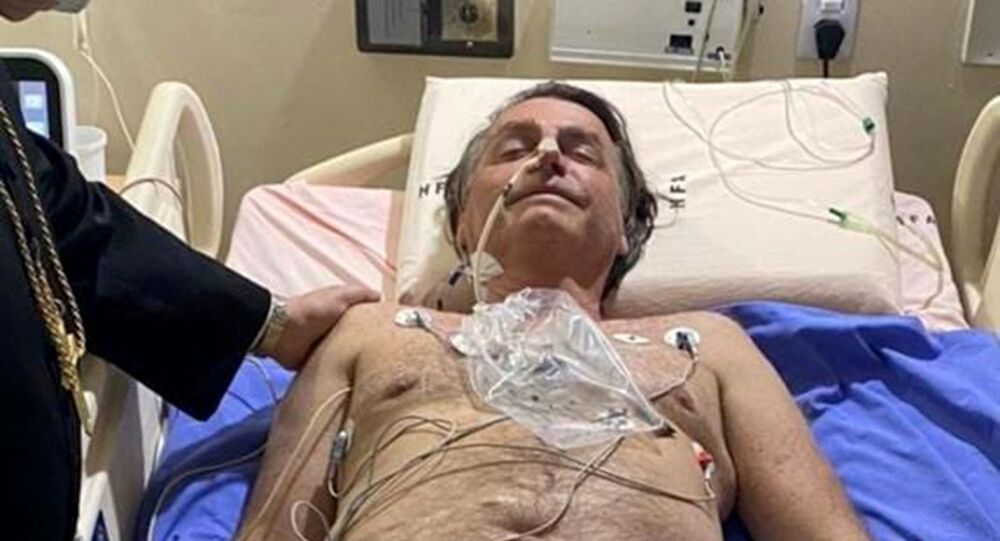 Bolsonaro Pledges to Be 'Back Soon' After Hospitalization, But Could Receive Emergency Surgery

Earlier in the day, Brazilian President Jair Bolsonaro was admitted to a military hospital in Brasilia to investigate his chronic hiccups. It was one of his latest health-related issues after he was stabbed in 2018 during his campaign.

Brazilian President Jair Bolsonaro on Wednesday tweeted that "we'll be back soon" after he was hospitalized earlier in the day to undergo tests for unrelenting bouts of hiccups.

He tweeted after Antônio Luiz Macedo, the surgeon who operated on him after the 2018 stabbing, decided that the president would be moved to Sao Paolo for additional testing to determine whether he needs emergency surgery. The president was diagnosed with an obstructed intestine on Wednesday.

Bolsonaro's son, Senator Flavio Bolsonaro, spoke to CNN on Wednesday, revealing that his father had been having trouble talking, but noted that, if he needs to undergo surgery, it should not be serious. Flavio also said that the doctors had removed liquid from Bolsonaro's stomach.

Bolsonaro's tweet reads: "We'll be back soon, God willing. Brazil is ours!".

​Bolsonaro's hospitalization was announced by his office earlier in the day, with the official statement saying that the president was "in good spirits and doing well" and will remain under medical observation for at least 48 hours.

This is Bolsonaro's latest health issue, after he was stabbed during his 2018 presidential campaign, with the injury reportedly damaging his intestine. In July 2020, he also was reported to have contracted the COVID-19 coronavirus but successfully recovered.