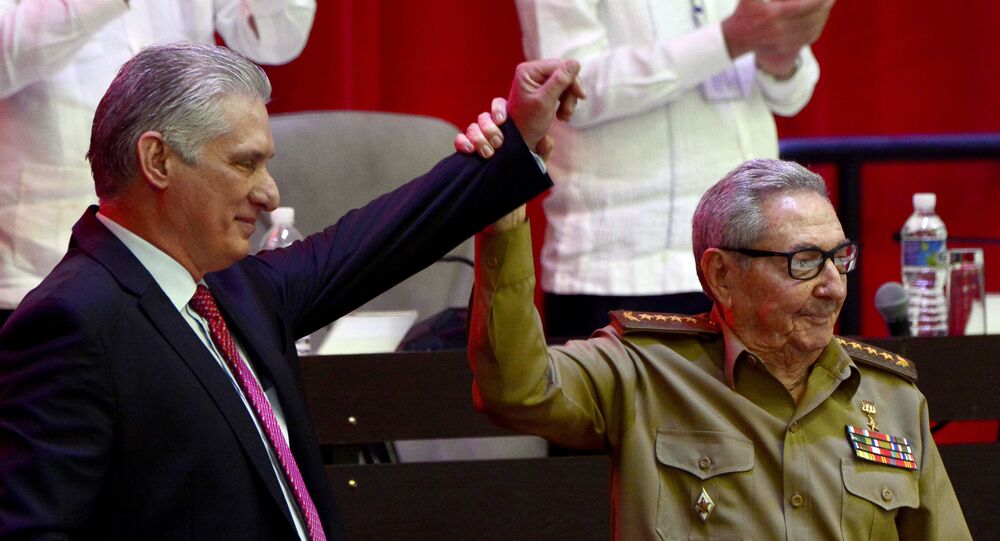 As citizens took to the streets on Sunday to demand improvement of economic conditions in the country amid the COVID-19 outbreak, it is worth noting Cuba has been under a US embargo for almost 60 years, which has prevented the arrival of humanitarian aid in the island nation during the pandemic.

Cuban President Miguel Diaz-Canel called for his supporters to take to the streets on Sunday after accusing enemies of the Cuban Revolution of trying to destabilize the Caribbean nation.

"We will not let anti-revolutionary mercenaries who are beholden to the American empire to create instability. There will be a revolutionary response," he said in a televised address to the nation.

"We are calling on all Communists to take to the streets where these provocations are being staged and oppose them," he said, referring to protests that are reportedly taking place in several cities.

Citizens took to the streets across the country on Sunday to oppose poor economic conditions and the government's handling of the COVID-19 pandemic. The nation has faced shortages of food and essential products as its health industry is going through difficult times.

Breaking: Large protests are ongoing throughout multiple cities in Cuba. Demonstrators are protesting against poor hospital care and food shortages in the country. pic.twitter.com/Lh3lVJOFFy

Crowds in the streets of #Cuba chanting "freedom" #SOSCuba pic.twitter.com/kJDDVuEITP

Meanwhile, US politicians took to Twitter to support the mass protests in the island nation, calling on the American government to support Cubans against the "communist dictatorship".

The incompetent communist party of #Cuba cannot feed or protect the people from the virus.

Now those in the military must defend the people not the communist party.

The humanitarian crisis happening right now in Cuba is just another symptom of communism’s incompetence. The equality that the Castros have brought to Cuba is misery for the people.

I stand in solidarity with the Cuban people and in support of their quest for freedom. #SOSCuba

People here in Tampa are standing in solidarity with those protesting in the streets of Cuba. @WFLA pic.twitter.com/C5ifCHXTCs

The United States imposed trade restrictions on Cuba in the late 1950s in response to the communist revolution. Ex-US President Barack Obama made small steps towards normalizing relations with its neighbor, but the Trump administration reversed many of those.

US State Department and its officials, involved to their necks in promoting social and political instability in #Cuba, should avoid expressing hypocritical concern for a situation they have been betting on. Cuba is and will continue to be a peaceful country, contrary to the US

US President Joe Biden has vowed to continue Obama's policies, but no significant steps have been made in that direction so far. Given the overall support of the ongoing unrest and decades-long rejection of any possibility for a socialist government in its backyard, it is highly unlikely the current administration will try to normalize relations.

The Russian Foreign Ministry condemned the US policies of violating human rights abroad earlier this week, which is epitomized in the harsh economic sanctions against states Washington deems "not free", with the most "egregious example" being the imposed and ongoing (despite numerous UN General Assembly resolutions) blockade of Cuba.

On June 23, the United States voted against a UN General Assembly resolution condemning the embargo on Cuba that was adopted by the overwhelming majority of 184 other nations.