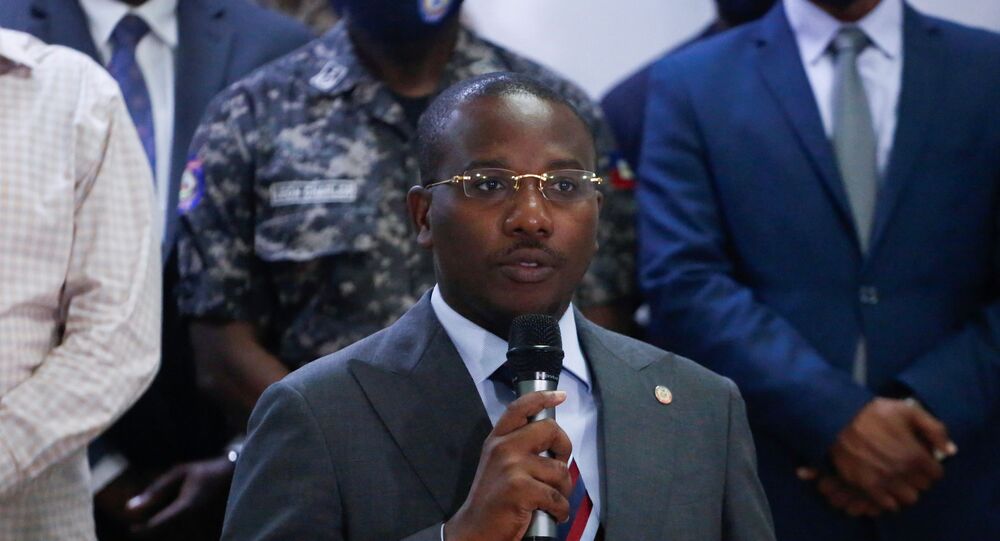 19 suspects – 17 Colombian nationals and two American citizens of Haitian descent – have been arrested in the wake of the assassination of Haitian President Jovenel Moise on 7 July. The Caribbean nation has been under martial law since, with interim authorities asking the US and UN to deploy troops to help secure strategic infrastructure.

Claude Joseph, the interim prime minister of Haiti, has said that President Jovenel Moise was tortured before his assassination, as he vowed to bring the perpetrators to justice, according to ABC News.

"Mercenaries came to the president's house, they tortured him and they killed him. We captured about 20 of them. They are currently in custody. And we believe, we staunchly believe, that justice will be provided to the President Jovenel Moise… We do have the right people [in custody],” said Joseph in an interview for the outlet on Friday.

Joseph, who declared a two-week state of siege after Moise's killing, said his main focus was to bring justice to the murdered President’s family.

© AFP 2021 / VALERIE BAERISWYL
Two men, accused of being involved in the assassination of President Jovenel Moise, are being transported to the Petionville station in a police car in Port au Prince on July 8, 2021

When questioned about the political power struggle that unfolded directly after the assassination, Joseph responded:

Claude Joseph was appointed by Moise in April to be the country's acting Prime Minister after Joseph Jouthe resigned. However, on 6 July, a day before Moise was killed, he appointed Ariel Henry to succeed Joseph.

Wikimedia Commons
Ariel Henry, who was appointed by Haitian President Jovenel Moise to be prime minister the day before Moise's assassination

While some claim that Joseph's assuming power is unconstitutional, he enjoys the support of the US and UN. Helen La Lime, the United Nations' special envoy for Haiti, said on Thursday that Joseph would lead the country until new elections, planned for September and November, have been held.

The Caribbean nation’s President Jovenel Moise was gunned down at his residence outside Port-au-Prince on 7 July by a team of heavily-armed international assassins. His wife, first lady Martine Moise, who suffered three bullet wounds during the attack, was airlifted to a hospital in Florida in critical condition.

On Saturday, an audio message was released from her official Twitter account, with a Haitian official cited by ABC News as confirming its authenticity.

"This great act of murder makes me and my children cry, and I know you are crying too. This act has no name, because it must be a crime out of bounds to assassinate a president like Jovenel Moise without giving him the opportunity to utter a word," said the widow of the slain president.

19 suspects – 17 Colombian nationals and two American citizens of Haitian descent – have been arrested in the wake of the killing. The two arrested Americans, identified by the authorities as James Solages, 35, and Joseph Vincent, 55, have denied being mercenaries.

The two claimed they were working as translators, according to Haitian Judge Clement Noel, who reportedly interviewed the pair, cited by ABC News. Solages purportedly found the job on the internet, and added the group had been supposed to arrest Moise rather than kill him.

On Saturday, a senior administration official was cited as saying "there are currently no plans to send US military assistance to Haiti".

A day earlier, the White House said that FBI and Department of Homeland Security officials would be sent to Haiti to assist with the investigation into the assassination of President Jovenel Moise.

White House ‘Has No Plans’ to Send Troops to Haiti, Possibly ‘Confused’ by Port-au-Prince’s Request