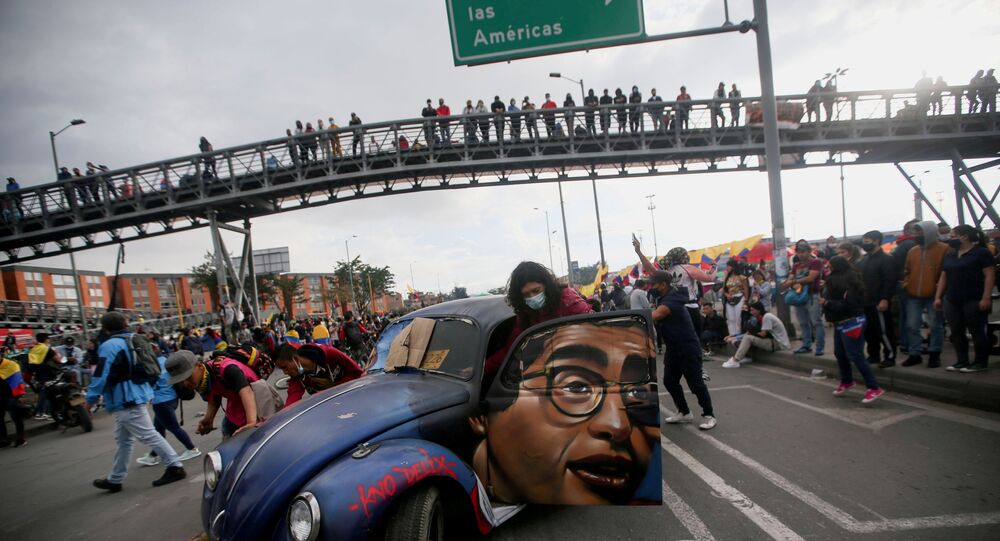 "The National Riot Police Force conducted 20 operations in various cities of Colombia during the day", Vargas said in a tweet about Monday's protests.

According to the official, the most difficult situation was in the western city of Pasto, where 11 city buses and a police car were attacked. A group of kindergarten children were at the epicenter of a clash between protesters and police in Pasto, Blu Radio reported.

​In the city of Medellin, protesters threw Molotov cocktails at a police station and a nearby store and tried to set a hospital building with 60 dialysis patients on fire. Five people, including a doctor, a journalist, and a security officer, were injured.

​In addition, the protesters damaged historical monuments in Santander de Quilichao and Barranquilla, where a statue of Christopher Columbus was knocked down from the pedestal.

Since April 28, Colombia has been gripped by protests against tax hikes, which continued even after the authorities discarded the initiative. Labour and student organisations demand social and healthcare reforms, demilitarisation of cities, and dissolution of Mobile Anti-Disturbance Squadron forces.​

The dialogue between the government and the protesters yielded no results in May and June, so the negotiations were halted. The authorities refused to sign an agreement guaranteeing peaceful protests, prompting protest leaders to withdraw from negotiations on 7 June. On 15 June, the National Protest Committee announced a temporary halt to periodic demonstrations, but spontaneous escalation of protests continue without visible organisers.