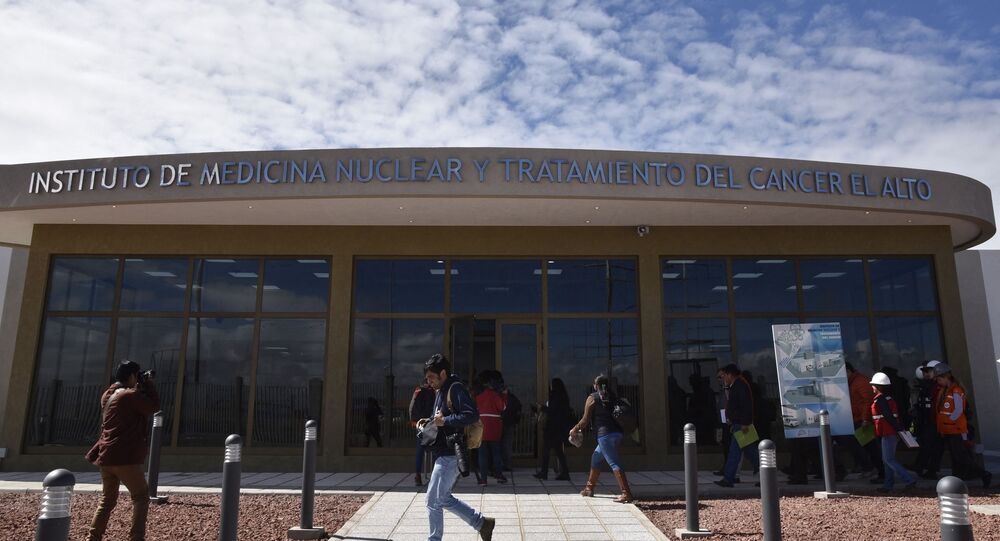 Latin American and Caribbean nations have yet to exploit nuclear power to its fullest: there are just seven nuclear power plants operating in the region: three of them are located in Argentina, two are in Brazil, and two are in Mexico.

At the same time, nuclear research reactors (RR) are far more spread: so far, they are utilised in nine Latin American states for research, development, education and training. RRs have a simpler design, operate at lower temperatures, and require far less fuel and far less fission. On the one hand, they are primarily used to produce neutrons for use in industry, medicine, agriculture and forensics, among other spheres. On the other hand, RRs are indispensable for testing new types of nuclear fuel and structural materials, training and educating nuclear operators and many other advanced research fields.

Bolivia, an Andean country of 11.5 million people, decided to reap the benefits of nuclear development in the mid-2010s with then President Evo Morales announcing in October 2015 that the country would build a $300 million nuclear complex, including a research reactor.

"It is essential that our countries have access to nuclear technology, especially in the area of nuclear medicine and radiotherapy, as well as in scientific research in various areas of the economy, culture and the environment," says former Vice Minister of High Energy Technologies Luis Alberto Echazu, who also served as minister of mining and metallurgy (2007–2010) and vice minister of mining and metallurgy (2006–2007).

Echazu's tenure as vice minister of high energy technologies in the Morales government (2017 – 2019) coincided with the development of the country's nuclear programme. On 19 September 2017, the Bolivian Nuclear Energy Agency (ABEN) and Rosatom's JSC GSPI inked a contract for construction of the Centre for Nuclear Technology Research and Development (CNTRD) in El Alto, located 4,000 metres above sea level.

​"With Russia, we started a process of energy and economic integration in the field of gas exploration through Gazprom and Rosatom and in the future, we will address the issue of lithium. A good relationship with #Russia is strategic for Latin America, especially #Bolivia."

According to Echazu, the Morales government kick-started the CNTRD project for the following purposes: enhanced healthcare services; agricultural product conservation, increasing their shelf life and eventual export; seed improvement, including the prevention and control of agricultural pests; as well as development of research in the areas of mining, geology, archaeology, industry, the environment, and water.

"The Bolivian economy will benefit in all these sectors, especially in healthcare and treating diseases such as cancer and cardiovascular conditions, which could be diagnosed in the early stages when it is still possible to prevent surgical interventions, avoid the aggravation of diseases, and save lives," Echazu emphasises.

Despite a temporary suspension of the project under the de facto Jeanine Anez government, the endeavour has been gaining momentum since Evo Morales' former finance minister, incumbent President Luis Arce won the snap elections in October 2020.

The CNTRD is located in the Parcopata zone, District 8 of the city of El Alto and is currently under construction. Upon completion it will have three components, according to ABEN:

In addition to this, contracts with Russia's Rosatom and the Argentine company Invap envisage the training of Bolivian nuclear specialists in prestigious research institutes in Russia and Argentina, notes the former vice minister.

Thus, in April 2019, the St. Petersburg branch of the Rosatom Technical Academy kicked off a series of nuclear infrastructure courses for representatives of Bolivia's Ministry of Labour, Employment and Social Security, the Interior Ministry, the Ministry of Defence and ABEN within the framework of the CNTRD project.

In July 2019, ABEN employees began training at the Tomsk Polytechnic University (TPU) in Russia – one of the flagship universities of Rosatom – aimed at building skills for the safe operation of the Multipurpose Irradiation Centre, one of the CNTRD's facilities. Furthermore, foreign students can perform laboratory work at an operating nuclear research reactor at TPU. In addition, the university provides them with the opportunity to undergo practical training at the operating atomic energy facilities of Rosatom.

The training of Bolivian specialists is going on and laying grounds for the country's expertise in the nuclear field, according to Echazu. Furthermore, it is probable that other Latin American states will follow Bolivia's example and replicate their nuclear programme.

"The Bolivian initiative has prompted interest from other countries to install similar enterprises," the former minister say,s referring, in particular, to Paraguay. "It allows the achieving of certain independence and self-sustainability, especially with policies of complementarity, scientific and technological exchange, and the training of specialists and researchers."