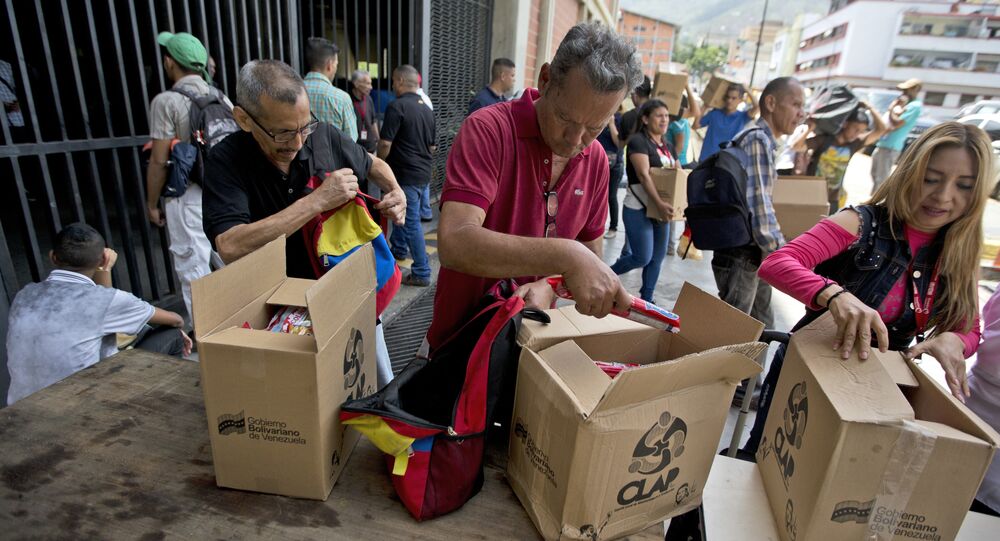 After Food Imports Drop by 84%, Venezuela Denounces US Sanctions at UN FAO

Venezuela was once hailed as a model for developing food security, but years of destructive sanctions by the US and its European and regional allies aimed at forcing Venezuelans to oust their government have hurt that record. Ironically, the US says it wants to improve the humanitarian situation in the country.

Venezuelan Minister for Food Carlos Leal Tellería told the United Nations Food and Agriculture Organization (UN FAO) on Tuesday that the country’s food imports had fallen by a catastrophic 83.7% due to economic sanctions.

"There is a campaign, promoted by the government of the United States and its allies, to systematically assault the Venezuelan people's right to food," Leal said, according to Xinhua News Agency. He told the body the sanctions had targeted "most of the country's international and national food suppliers.”

”These measures [the sanctions] have caused a 83.7 % drop in food imports, thus preventing the international procurement of raw produce, manufactured goods and inputs for agricultural production, as well as sanctioning most international and national companies that supply food to the country".

Leal noted that in 2015, before then-US President Barack Obama declared Venezuela to be an “extraordinary threat to the national security” of the US and began imposing sanctions, the FAO had hailed the country’s achievements in food security, hailing Venezuela as a promoter of the right to food and of boasting a successful model.

He noted that the Local Supply and Production Committees (CLAP), begun by Venezuelan President Nicolas Maduro in 2016 to ensure that sanctions didn’t threaten Venezuelans’ food security, were still serving more than 700,000 vulnerable people every month through nearly 3,700 soup kitchens, according to TeleSUR.

Those services are in addition to the roughly 6 million Venezuelan families that receive a box from CLAP every month containing essential products like masa and oil, and have access to heavily subsidized local markets that keep prices low. However, the CLAP program has been heavily dependent on imports to keep it going.

“The CLAP program itself is heavily, massively dependent on imports. The initial idea of the program when it was launched in 2016 by the Maduro government was that it would stimulate communities to start producing and distributing on a very micro, local level. This effectively hasn't happened, and well over 90% of the products that people receive in their CLAP bags are imported,” Venezuelanalysis journalist Paul Dobson told Sputnik in August 2019.

“So obviously, any sanctions on third parties ... [are] obviously going to have a fairly serious impact on the distribution and the imports of the products we see in the CLAP boxes here, which will have a knock-on impact on Venezuela's nutritional health effectively, the amount of food Venezuelans have access to … and [affecting Venezuelan access to food] will utterly have political consequences,” he added.

That month, the US Treasury singled out the CLAP program for sanctions, claiming it was a tool of social control used to buy the loyalty of Venezuelans to Maduro’s government. In January of that year, the US had mounted an all-out attempt to overthrow Maduro and replace him with Juan Guaido, a little-known legislator from a right-wing party in the National Assembly who never ran for president, but who unconstitutionally declared himself Venezuela’s interim leader and immediately won US and Western European support.

After several coup attempts that year and a mercenary invasion that failed catastrophically in 2020, Guaido’s movement has totally fizzled, but the US has kept up the “maximum pressure” campaign aimed at forcing Maduro from power. The onset of the COVID-19 pandemic did nothing to blunt the US offensive, and the incoming administration of US President Joe Biden has not deviated from the precedent set by his predecessor, Donald Trump.

Both US lawmakers and the United Nations Special Rapporteur on the negative impact of unilateral coercive measures on the enjoyment of human rights have urged the Biden administration to lower its sanctions against Venezuela in the interests of helping the country combat the COVID-19 pandemic. Their appeals admit the sanctions have had “catastrophic humanitarian consequences” for the South American nation.

In an April 2021 report, the US Agency for International Development (USAID) inspector general admitted the Trump administration used purported humanitarian aid as a tool for regime change in Venezuela, with its preparations following foreign policy demands instead of what the situation in Venezuela actually warranted.

Instead, Venezuela has been getting some aid from the US World Food Program to supplement the diets of elementary school children, the government said earlier this year.

Other reports, such as by the UN Office of the High Commissioner on Human Rights, have similarly noted the destructive effects of the sanctions on access to food and medical equipment, but misdiagnosed the causes, blaming Maduro’s government instead, as Sputnik has reported.

Iranian Ships Sail Through Atlantic Amid Reports They Are Heading to Venezuela - Photo, Video