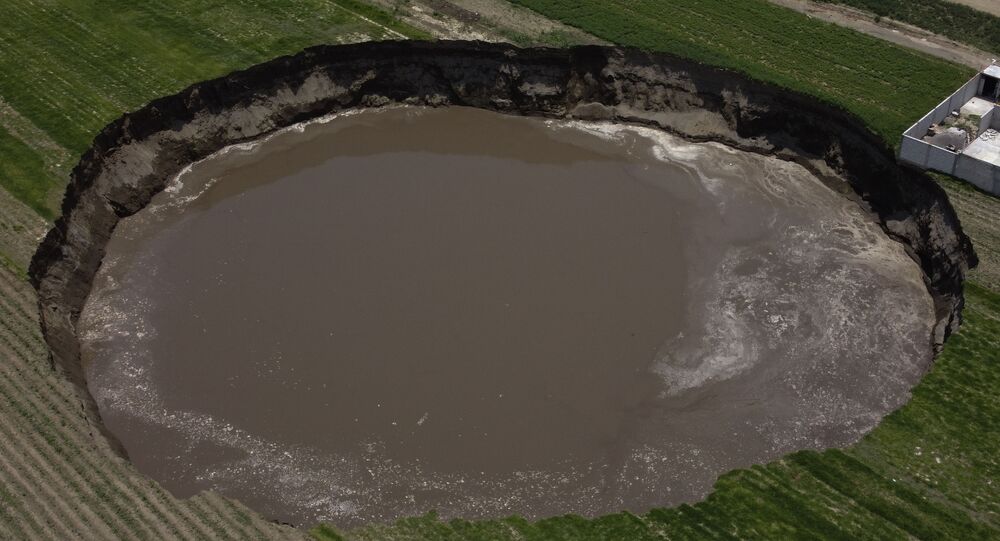 A massive sinkhole measuring several hundred feet across first appeared in the town of Zacatepec, in Mexico’s Puebla state, in late May, prompting authorities to create a barrier to ensure a safe distance is kept from the site. To date, the sinkhole has not caused any fatalities.

The Zacatepec sinkhole has officially consumed the majority of a home located a few dozen feet away from its perimeter, photos and video recently taken at the site has confirmed.

Footage taken by local outlets shows that the sinkhole has continued to grow over the last several weeks, and has swallowed nearly all of a home that was initially situated along the crater's edge.

The Mexico Daily News reported that only one bedroom and part of the home’s outer wall remained after the Friday night collapse took place.

Heriberto Sánchez, whose family formerly lived in the home, told the outlet that the sinkhole has left the family with “nothing”, and in a tough situation, as they’re originally from Mexico’s port city of Veracruz.

There is light at the end of the tunnel for the family, however, as Puebla Governor Miguel Barbosa indicated that local officials would donate land and build the family a new home. It’s unclear where they have been temporarily relocated.

© REUTERS / Agencia Es Imagen
An aerial view of a sinkhole found in a farmland in Santa Maria Zacatepec, Puebla, Mexico May 30, 2021 is shown in this screen grab obtained from a social media video.

The latest development came a day after rescuers were able to successfully remove two dogs that became trapped on a ledge some 50 feet inside the massive water-filled sinkhole. The dogs, named Spike and Spay, had been on the ledge for about three days.

Estimates put the sinkhole at over 400 feet across, at some parts, and nearly 150 deep. Officials are unsure what prompted the sinkhole to emerge, but speculation has suggested that it was probably caused by a combination of the cultivation of farmlands and the extraction of groundwater.

In related news, officials recently detected the emergence of a sinkhole some 40 feet in diameter near the popular Australian town of Robe. Local officials have indicated that the sinkhole is the result of coastal erosion brought on by rough seas and heavy rain.

Massive Sinkholes Emerge in Croatia in Wake of Deadly Earthquake