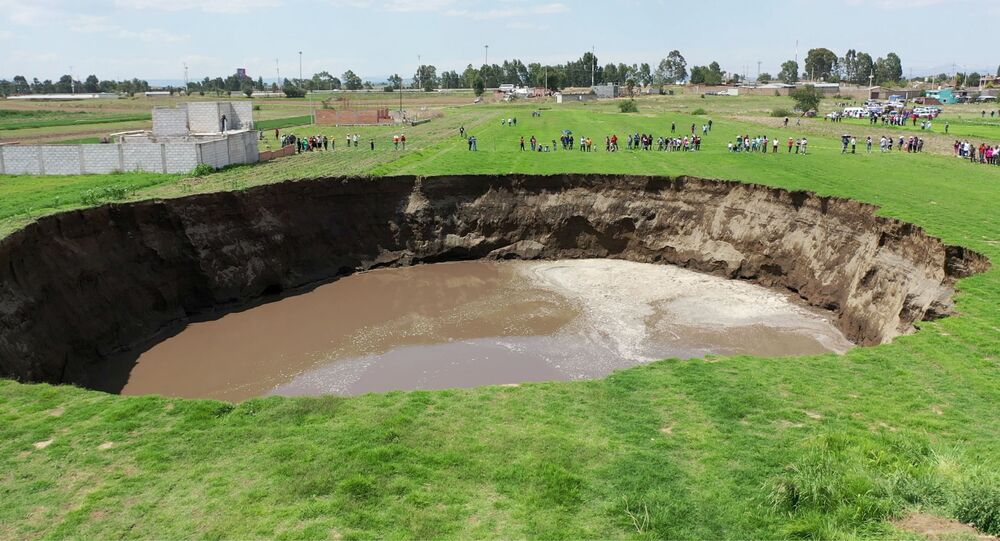 Reports initially surfaced in late May that an enormous sinkhole measuring at 300 feet across had emerged in the town of Zacatepec, in Mexico’s Puebla state. However, in the weeks since, it has continued to grow in both width and depth.

A massive sinkhole in east-central Mexico recently prompted the deployment of law enforcement authorities to ensure a security barrier after the sinkhole extended its reach and began to consume a nearby home.

Latest figures place the sinkhole at over 400 feet across in some places and roughly 150 feet deep, although officials have warned that it’s presently difficult to pinpoint an exact depth as the crater is filled with water.

Since its emergence, the sinkhole has managed to trap two dogs who have been stranded on a ledge situated some 50 feet above the surface of the crater’s water, and has also started eating away at the perimeter wall of a nearby house.

Despite pleas from the public, authorities have indicated that they are unable to remove the dogs, named Spay and Spike, as a result of the continued deterioration of loose soil along the sinkhole’s edges.

However, state government officials have noted that they have been able to safely drop down food to the pair of the dogs. According to the Mexico News Daily, the dogs fell into the sinkhole on Monday at about 7 p.m. local time after Spay, an eight-month-old pit bull, began playing with a local stray dog and crossed the security barrier.

© AP Photo / Fernando Llano
A Mexican soldier stands on guard inside a security perimeter around a water filled sinkhole in Zacatapec, on the outskirts of Puebla, Mexico,Wednesday, June 9, 2021. The massive water-filled sinkhole continues swallowing farmers' fields in the central Mexican state of Puebla.

Soldiers deployed by the Mexican government are ensuring that locals and interested passersby are keeping some 2,000 feet away from the edge of the sinkhole.

Although authorities have yet to determine the cause of the sinkhole, public speculation ranges between excessive groundwater extraction by nearby factories, geological faults in the soil content and a possible underground river that was previously undetected.

An official determination is expected sometime in the next few days. Puebla Gov. Miguel Barbosa told the media that if water extraction caused the incident, he would opt to cancel any further permits.

Massive Sinkholes Emerge in Croatia in Wake of Deadly Earthquake