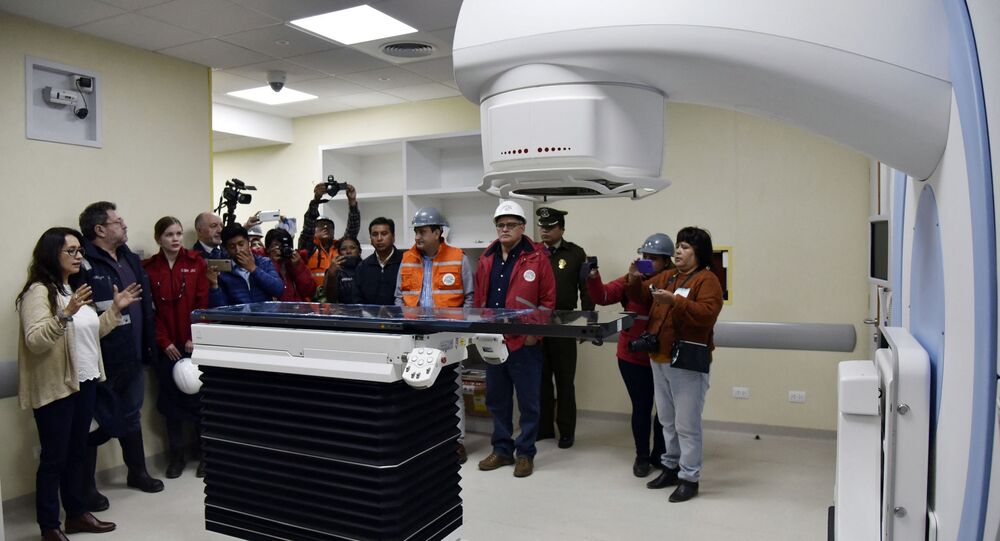 Bolivia is reviving projects that were put on pause after the November 2019 coup d'etat. Together with restarting its ambitious lithium programme, the country is continuing the construction of the Centre for Nuclear Technology Research and Development (CNTRD) in El Alto.

On 4 June, Bolivian Minister of Hydrocarbons and Energies Franklin Molina Ortiz met with senior managers of state atomic energy corporation Rosatom during his official visit to Russia. They discussed what progress had been made to date in the implementation of the joint CNTRD endeavour and projected that the operations of its first component – the Multipurpose Irradiation Centre (MIC) – would begin before the end of 2021.

On 19 September 2017, the engineering, procurement, and construction (EPC) contract for the CNTRD construction in El Alto was signed by the Bolivian Nuclear Energy Agency (ABEN) and JSC GSPI, operating under the auspices of Rusatom Overseas – Rosatom's company responsible for the international marketing and promotion of centres for nuclear science and technology.

"The CNTRD project is a unique project not only for Bolivia, but also for the entire Latin America," Mikhail Ledenev, the head of the Russian embassy, told journalists on 24 March 2021. "Such centres are to improve R&D collaboration and attract scientists from all over the world helping to solve global challenges."

In accordance with the project, the innovative centre will be equipped with "a 200kW VVER research reactor, a multipurpose irradiation centre based on a gamma installation, a cyclotron radiopharmacy complex, engineering facilities, and various research laboratories" for the needs of healthcare, agriculture, industry, and many other sectors of Bolivia's economy. The centre is therefore expected to be instrumental in combating oncological diseases as well as increasing the shelf life of the country's food products and ensuring their safety and quality.

Furthermore, the joint endeavour provides new jobs for the country's population: "100 percent of the personnel in charge of construction are Bolivian," Russian consul in Bolivia Iakov Fedorov pointed out in late January 2021 as quoted by EA Bolivia, a radio station from El Alto. "The technology is Russian, but the workforce is from this country."

"The Bolivian construction companies are actively involved in the CNTRD construction process," Alexey Altynov, Vice President of JSC Rusatom Overseas, told the press this March. "For example, there are over 300 Bolivian citizens currently working on the site."

The Phase 1 and 2 facilities are due to be handed over to the customer in autumn 2021, according to Altynov, while Phase 3 and 4 of the project – i.e. construction and equipment of R&D laboratories, as well as construction of a research reactor – are expected to be completed in 2024.

© AFP 2021 / AIZAR RALDES
View of the entrance to the Insitute of Nuclear Medicine and Cancer Treatment -part of the Investigation Centre of Nuclear Medicine complex, still under construction- in El Alto, Bolivia, on March 10, 2020. - Russian company Rosatom is building the first nuclear research center for medical and agricultural purposes in the Bolivian city of El Alto, which costs 351 million dollars

Bolivian President Evo Morales had long considered launching the country's sovereign nuclear programme. In October 2010, he announced an agreement with Tehran to use Iran's technology to build a nuclear power plant in Bolivia. La Paz also signed nuclear agreements with France and Argentina and rallied support from the International Atomic Energy Agency (IAEA).

However, it appears that the final decision was made in 2015. On 29 October 2015 Morales stated that the country would build a nuclear complex in El Alto, on a 20-hectare (50-acre) site located 4,000 metres above sea level, with Russian technology and help from Argentina. He specified that the project would cost $300 million and dispelled the opposition's criticism stressing that the atomic endeavour poses no environmental threat. "It doesn’t contaminate the ground, water, or air," he told his critics.

The Bolivian government was very serious about its new responsibilities related to the atomic programme. In September 2019, Bolivia joined two nuclear safety treaties, namely, the Convention on Nuclear Safety and the Joint Convention on the Safety of Spent Fuel Management and on the Safety of Radioactive Waste Management. It was initially planned that the first Bolivian nuclear centre would become operational in 2022.

Meanwhile, Bolivia and Russia's Rosatom continued to broaden cooperation. On 11 July 2019, the Bolivian Ministry of Energies and the Russian state-run organisation signed a Memorandum of cooperation in the field of developing industrial projects and research in the lithium industry. Being located in Latin America's Lithium Triangle, Bolivia is sitting on one of the largest deposits of the alkali metal in the continent.

In a sudden twist of fate, the Russo-Bolivian projects were put on pause after the 2019 October general elections in the Andean country. Following the protests and ungrounded accusations of voter fraud, the Morales government was ousted in November 2019. The de facto government of Jeanine Anez started overhauling the country's economic programmes and foreign alliances.

On 12 February 2020, the Bolivian nuclear agency, ABEN, stated that the country was suspending a joint project with Russia's Rosatom on the construction of a nuclear research facility in El Alto.

"There was an order to suspend the construction of a nuclear research centre until the parliament and the prosecution have spoken on the matter," Juan Alfredo Jordan, the agency's director-general, said in a statement, claiming that the Morales government violated the country’s constitution by making a decision without the parliament’s approval.

The news came out of the blue, as Rosatom did not receive any official notification from the Bolivian nuclear agency that the project had been suspended, according to the company's representatives.

However, the Anez government ruled for slightly less than a year being mired in political controversy and subjected to heavy criticism by Bolivian socialists for political persecution and mishandling of the COVID pandemic.

Eventually, the October 2020 snap election in the country was won by Movement Toward Socialism (MAS) candidate and former Minister of Finance Luis Arce. Once inaugurated, Arce started restoring the Morales legacy including the joint CNTRD project with Russia opening the door to innovations and further economic development of the Andean state.

Bolivia Vows to Produce COVID Vaccines, Including Russian One