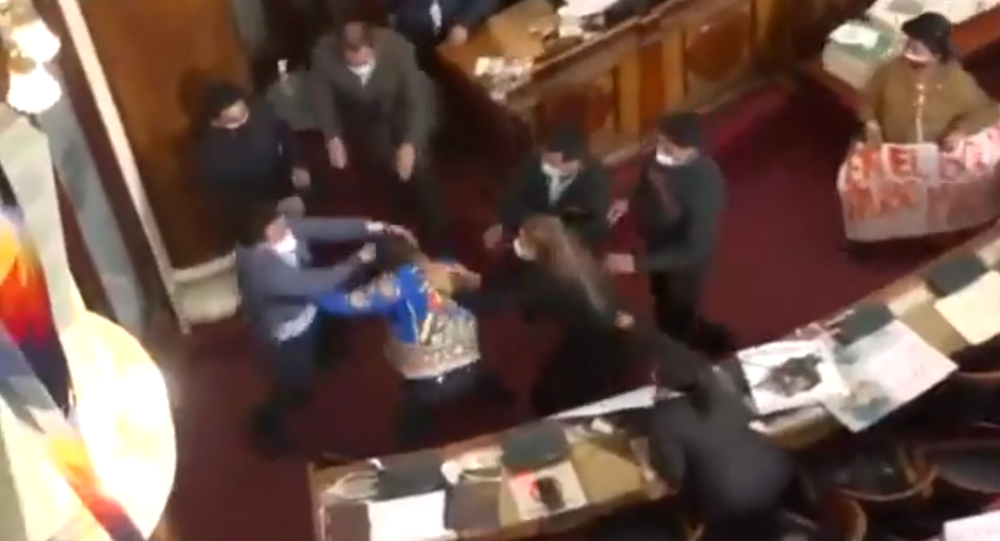 Two lawmakers traded punches in Bolivia’s Plurinational Legislative Assembly on Tuesday amid an intense debate about the detention of Jeanine Áñez, who led the coup government that overthrew democratically elected President Evo Morales in 2019 and was herself arrested in March.

Judging from footage of the event, Antonio Colque of the left-wing Movimiento al Socialismo (MAS) party appears to throw the first punch as Henry Montero of the right-wing opposition party Creemos waves his fist in another lawmaker’s face. As the melee continues, it’s Colque who winds up on his back as Montero rains punches down on him.

However, after Montero gets up and others separate them, a second fight soon breaks out between two female lawmakers: Tatiana Áñez from Creemos and María Alanoca of MAS.

Bolivian politicians trade kicks and punches on Tuesday during a debate on recent arrests of former officials of the previous interim government of Jeanine Anez. pic.twitter.com/tVMZkIQ1q2

A fight has broken out in the Bolivian Parliament between the opposition politician Henry Romero and a member of the ruling socialist MAS party, Antonio Colque.

​"They all grabbed me, pulled me by my back," Colque told reporters after the fight. "We can't allow this."

Bolivian senators were gathered on Tuesday to review the circumstances leading up to Áñez’s March 2021 arrest on charges of terrorism, sedition and conspiracy. Before being ousted in an October 2020 election, Áñez had ruled the country for 11 months, coming to power in the vacuum created by Morales’ sudden departure from Bolivia amid threats against him and the blocking by police of lawmakers from his MAS party from entering the Senate to decide on the path of succession. Áñez, then a senator of minor ranking, became the most senior official in the legislature and declared herself the country’s interim leader in violation of the Bolivian constitution, being instantly hailed for it by Western powers like the US, who had opposed Morales.

Morales and MAS have long claimed it was a coup, and after taking office Áñez moved quickly to erase the legacy of 15 years of rule by the indigenous-led party, as well as to crush the indigenous protests against her new government, killing at least 33 people. However, opposition parties who said Morales had fouled the October 2019 election results in order to stay in power said Áñez was an interim leader whose goal was to return Bolivia to democracy.

When Luis Arce of MAS handily won the elections, which had been delayed repeatedly by the Áñez government, the trend was reversed and Áñez and most of her central government cohort were arrested and charged for their roles in the coup within months. International experts have also mostly admitted that they were wrong about the counting of votes in October 2019 being fraudulent, as well.

She has rejected the charges against her and called them a “political persecution.” Thus, there was no shortage of tension in the senate hearing on Tuesday, and it brought Colque and Montero to blows.

According to the Rio Times, immediately before the fight, Interior Minister Eduardo del Castillo, during which victims of the massacres of indigenous protesters at Sacaba, Senkata and Pedregal by the military that happened under Áñez protested outside the chamber, carrying three cardboard coffins and asking del Castillo for justice.

Creemos is a right-wing alliance of the Solidarity Civic Unity and Christian Democratic Party, which fielded Luis Fenando Camacho in the 2020 election. Camacho led the Unión Juvenil Cruceñista fascist militia, which formed the tip of the spear during the 2019 coup, capturing the presidential palace just hours after Morales fled the swelling violence.