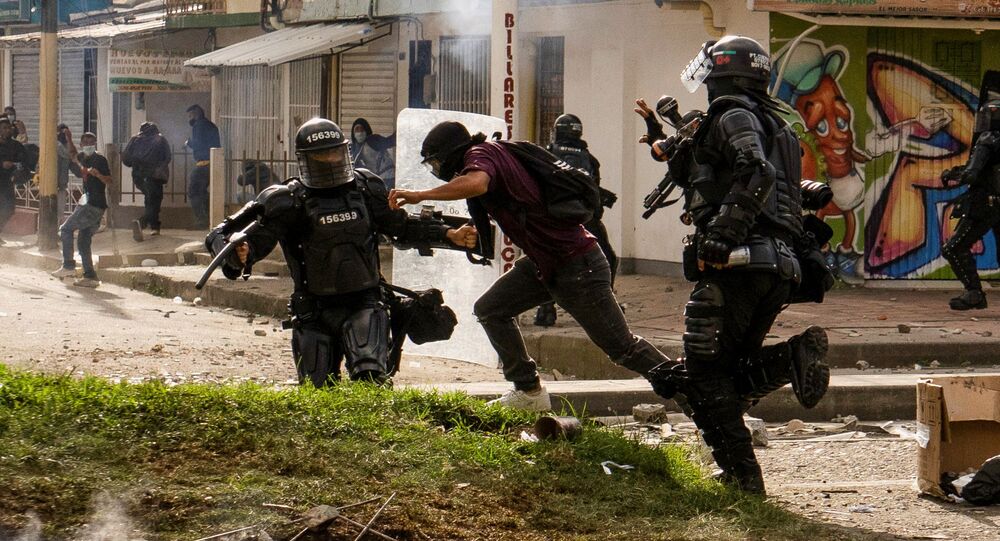 MEXICO (Sputnik) - Peaceful mass protests in Colombian cities, which were re-convened by the national strike committee, escalated into violent clashes with special forces and left dozens of people injured, the Red Cross said.

"The Red Cross has assisted 139 people in the middle of the demonstrations in Bogota, mostly in the Yomasa sector in Usme, including five policemen and 134 civilians", the Red Cross said on Twitter.

In another tweet, the humanitarian organisation specified that among the main injuries were 96 cases of eye damage, 36 injuries to the head, face, or extremities, as well as three traumas, a nosebleed, a stab wound, a poisoning, and one injury from a traffic accident.

​Authorities in Hamundi, a town located in the north of Cali, have imposed a night curfew due to unrest. Local media reported eight injured protesters. Numerous cases of vandalism have occurred in the capital of the Santander department, Bucamaranga.

Prior to the riots, the national strike committee, which organises anti-government protests, said the authorities did not want to speed up the negotiation process to cancel the demonstrations. The signing of an agreement between the parties with guarantees for a peaceful protest was postponed until Thursday. Protest leaders convened a new general demonstration on Wednesday with 300 municipalities and major cities across the country taking part.

Since 28 April, Colombia has been gripped by protests against tax hikes, which continue even after the authorities discarded the initiative. Labor and student organisations demand social and healthcare reforms, demilitarisation of cities, and dissolution of Mobile Anti-Disturbance Squadron forces.

According to the Ministry of Finance, the daily damage to the country's economy is almost half a billion US dollars, total losses exceeding 10 billion dollars. In some cases it was necessary to use humanitarian corridors with the support of the local UN mission to provide the blocked cities with food, medicine, and fuel.