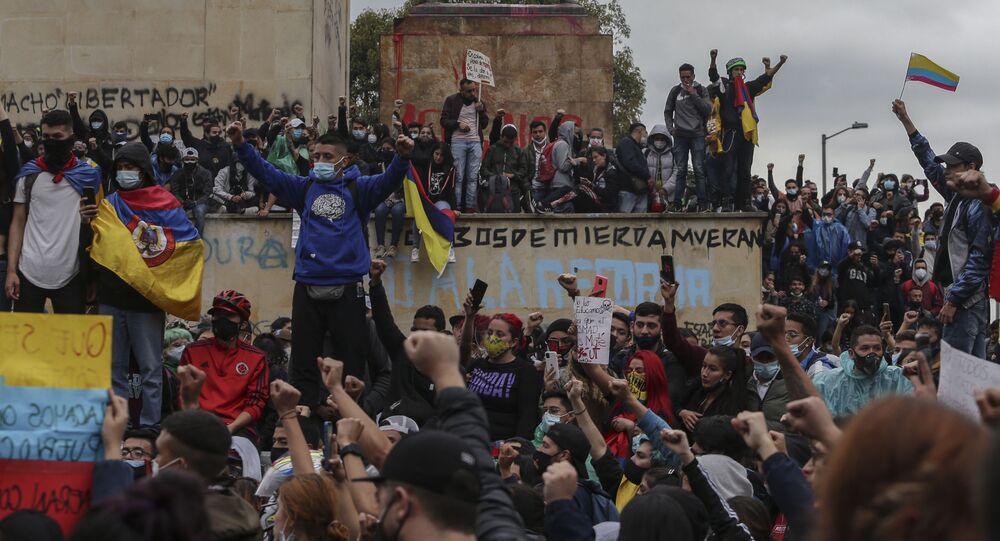 BOGOTA (Sputnik) - At least two people died and more than 10 were injured in the latest clashes with law enforcement in Colombia’s western municipality of Yumbo, where strikes and demonstrations have been ongoing since last month, a local journalist told Sputnik.

"In the early hours of today, they violently attacked with the Mobile Anti-Disturbance Squadron (ESMAD) forces and injured more than 10 people, especially young people. At this moment there is talk of at least two deaths, including one member of an indigenous community. There are numerous detainees", journalist, lawyer and historian Luis Alfonso Mena said on Monday.

Meanwhile, local police said that only one person died, while 16 others were injured in the early hours of Monday.

According to Mena, many of the injured have decided not to go to the Yumbo hospital to avoid being detained by the authorities who have accused them of committing acts of vandalism.

© Sputnik / Mindia Gavasheli
Hundreds of protesters are seen in gathering in the Plaza de Bolivar in Bogota, Colombia, amid raging anti-government protests.

Police said that demonstrators attacked law enforcement officers with handmade explosive devices on Monday and there were six injured police officers. The house of the mayor of Yumbo, Jhon Jairo Santamaria, was also attacked with stones.

In the meantime, Colombian President Ivan Duque said that the authorities will be deblocking roads, stressing that the blocks are a threat to the proper functioning of the healthcare system and food supplies.

"There is no right in Colombia to block roads; no right to affect the rights of others. I have instructed the Public Force to unblock roads in the country, working with mayors and governors, and in strict compliance with human rights", Duque said in a Monday address broadcast on his Twitter page.

"We have spoken with young people and we understand their concerns. I want to announce to the country that we will launch, on July 1, a Shock Plan to generate employment for young people between 18 and 28 years old," Duque added , addressing protesters’ concerns.

Earlier, a member of the National Unemployment Committee (CNP) and president of the General Confederation of Labour (CGT) Percy Oyola told Sputnik that CNP was planning a major demonstration for Wednesday after no progress was made at Monday talks with the government.

Workers' strikes and public protests started in Colombia last month, with people walking out against the so-called Sustainable Solidarity Law, a now-shelved tax reform bill that trade unions warned would lead to at least 1.5 million workers having to pay new taxes.

According to Colombian human rights officials, about 50 people have died amid the protests, including one police officer, while nearly 600 have been injured. Hundreds have been detained. Demonstrators, as well as international institutions, have been drawing attention to the disproportionate use of force by the Colombian police.

© REUTERS / LUISA GONZALEZ
Demonstrators take part in a protest against the tax reform of President Ivan Duque's government in Bogota, Colombia, May 1, 2021.

Percy Oyola, a member of the National Unemployment Committee (CNP) and president of the General Confederation of Labor (CGT) told Sputnik on Monday that there were two deaths and 24 injuries on Sunday.

CNP will organise a nationwide demonstration in Colombia on Wednesday after no progress was made during Monday talks with the government, Oyola said.

Earlier, Colombia’s Central Union of Workers (CUT) called for the continuation of strikes and popular assemblies, announcing a mass demonstration for Wednesday.