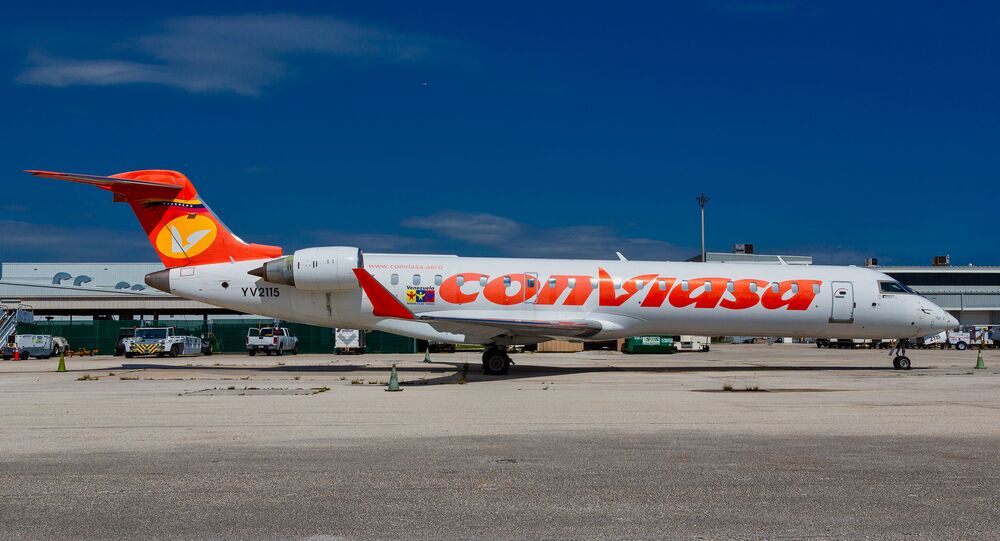 MOSCOW (Sputnik) Ekaterina Chukaeva - The Venezuelan state-owned Conviasa airline continues to work despite US sanctions and the COVID-19 pandemic, and has not had to fire a single employee amid these difficulties, Conviasa Vice President Jose Gregorio Marquez Ramirez said.

"Since the beginning of the economic blockade, [the introduction of the] unilateral sanctions by the United States, we have used some alternative measures to overcome these sanctions. Since the sanctions were introduced, we have not stopped, we have continued our work," Marquez Ramirez said.

According to the official, Conviasa had to create innovative solutions in aviation to overcome the sanctions.

"In the midst of the economic blockade, we were [developing] our national aviation industry and air freight industry. We seek to be innovators, to become a country that produces products in an innovative sector of industry. This proves once again that despite the blockade, we continue to work in order to provide our services. It was not easy, but we achieved it," Marquez Ramirez said.

Conviasa also tried to appeal the sanctions by collecting necessary documents and presenting them in the international courts, he added.

Marquez Ramirez also noted that Conviasa was one of the few airlines in the world that continued its work despite the pandemic or sanctions. He added that the company has accepted the sanctions as a reality.

The airline continues to maintain friendly relations with Russia, China and Iran, as well as other countries, Marquez Ramirez said. He also praised the countries of Bolivarian Alliance for the Peoples of Our America (ALBA), which, "in spite of everything, unconditionally helped us with all commercial operations to support our aircraft."

"From our side, we continued our operational activities and did not fire a single employee, even during the pandemic. We overcome sanctions thanks to our willingness and the persistence of our employees," he said.

Marquez Ramirez was a member of the Venezuelan delegation, which arrived in Moscow on the inaugural direct flight from Caracas that landed at Vnukovo Airport on Saturday. The flight was organized by the Conviasa airline.

In January 2019, Venezuela plunged into a political crisis when the then-head of the opposition-controlled National Assembly, Juan Guaido proclaimed himself interim president in a bid to oust reelected President Nicolas Maduro from power. The United States and most Western countries endorsed Guaido and slapped crippling sanctions on Venezuela. Russia, China, Turkey and several other nations have been supporting Maduro.