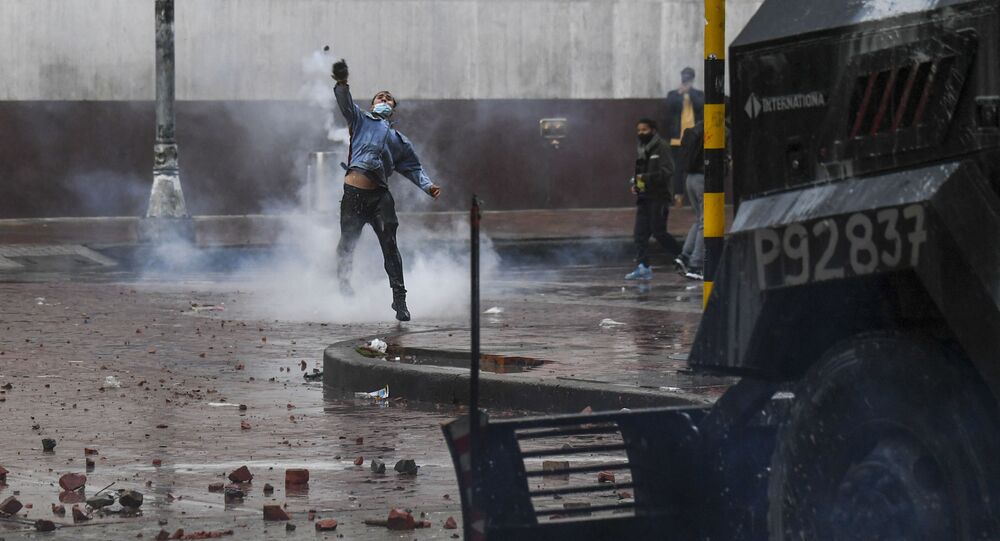 An organisation representing indigenous women in Bolivia has slammed state violence against protestors in Colombia in a statement. The comments follow a major rally in Trafalgar Square last week supporting Colombians protesting a contentious tax reform law from the country's central government.

Colombian president Ivan Duque and former president Alvaro Uribe should stop killing protestors as well as acting on behalf of foreign interests, a spokesperson for the Bartolina Sisa Resistance movement in the United Kingdom said this week.

According to Miriam Amancay Colque, a spokeswoman for the movement, the Duque and Uribe governments were a "puppet for the [United States] and its corporate grab" for resources in Latin America.

Colombians were rallying against the government's 15 April tax reform bill, which had been withdrawn amid public pressure, but Bogota had continued its repressions by burning houses, deploying tanks and helicopters and shooting residents, among others, she said.

"The police as usual, ruthlessly continue shooting to kill mainly at night time and the number of victims killed, injured and disappeared increases," the spokeswoman said.

Historical Ties To State Violence in the Colombian Armed Conflict

Speaking on historical state violence against Colombians, she noted over 6,400 people were killed by the Colombian army in its war against the Revolutionary Armed Forces of Colombia (FARC) from 2002 to 2010, adding thousands were falsely designated collateral damage, or 'false positives', with many soldiers being awarded promotions and other incentives.

© AP Photo / Fernando Vergara
Over 370 People Go Missing During 9 Days of Tax Reform Protests in Colombia, Rights Group Says
Over 220,000 were killed and 25,000 disappeared amid 60 years of armed conflict in the nation, with roughly 5.7 million people displaced, she explained.

But ceasefire agreements signed in Cuba between Bogota and guerrilla groups in 2016 failed to stop "state organised terror" against Colombians, which continued "unabated", Colque said.

"These cease-fire agreements are nothing more than window dressing for business as usual because Ivan Duque has ignored the Peace agreement," Colque said in her statement.

Right wing militias working with the government had taken land and displaced native communities across the country, she explained, adding over 700 social leaders and 300 peace signatories had been killed up to the recent crisis, she said.

"Instead of providing with health, housing, jobs, education, Duque, ally of [right-wing] regimes, spends his time plotting against democratically elected governments like Venezuela that seek, in however modest a way, to secure some decent level of existence for its people who long to have the same rights as others," Colque said in her statement.

"Colombia bleeds today. Ivan Duque kills their sons and daughters. But Colombia has woken up and will not be silenced. The forgotten, the voiceless will be no more," she concluded.

The news comes as dozens of people have died in protests, sparking outcry from the UN, who urged security forces to avoid using live ammunition.

Fresh protests were launched on Wednesday and numerous police stations have been attacked, with Bogota mayor Claudia López requesting support from the army, according to reports.

The Movice National Movement of Victims of State Crime wrote on Twitter on Friday it estimated roughly 379 people have gone missing since the beginning of the demonstrations to the present day.