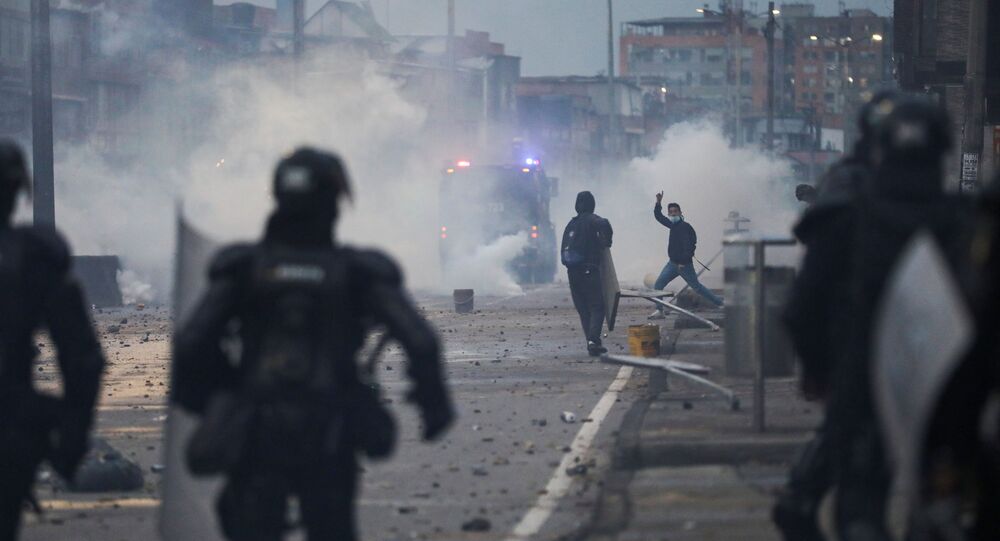 MOSCOW (Sputnik) – At least 209 police officers have been injured and 185 activists detained during the two-day protests against a tax reform proposal in Colombia, the country's police said.

“As of the Friday morning, a total of 209 police officers have been injured as a result of vandal attacks since April 28, including 71 in Bogota and 68 in Cali,” police said on late Friday.

Within the same period of time, 185 people have been detained over acts of vandalism and other crimes. The list of the detainees includes eight foreign citizens and 16 minors.

The authorities have authorized rewards of up to $5,357 for those who help identify people involved in acts of vandalism.

Social media users shared videos of clashes between protesters and police that allegedly occurred on Friday, as well as extremely graphic videos of victims and the injured as a result of the violence on the streets.

Warning: the footage below contains scenes some may find disturbing.

Graphic footage: Colombian police just murdered at least 5 people in the city of Cali, a center of protests against @IvanDuque’s tax increase. Other sources say 7 were killed. More blood on the hands of the US-backed narco-regime. pic.twitter.com/FR21bqLJXD

Later on Friday, Colombian President Ivan Duque said that the tax reform plans would be revised over the protests.

"I have made a clear task to the Finance Ministry's team to develop a new text [of the legislation] as part of the legislation process together with the Congress. [The new text of the law] should receive a [public] consensus and may include useful initiatives proposed by parties and organizations," the president said.

Nationwide protests and strikes erupted in Colombia on Wednesday against the Sustainable Solidarity Law, a tax reform bill presented earlier this month. Trade unions claim that the proposed reform will lead to at least 1.5 million workers having to pay new taxes.

​Colombia's former president Alvaro Uribe Velez issued a statement on Twitter in which he spoke in support of the law and offered his condolences to the injured police officers.

Duque has previously said that the initiative, which is expected to help raise around $6.8 billion, will significantly contribute to efforts aimed at alleviating the negative economic effects of the coronavirus pandemic.

One Reportedly Dead, 18 Injured in Clashes Between Police and Protesters in Paraguay - Video