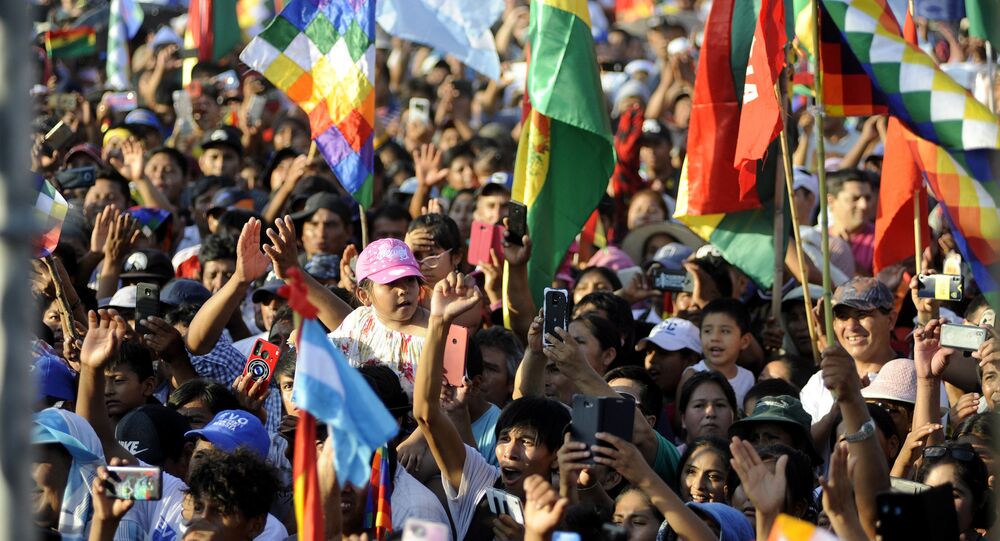 The former Bolivian president made the comments shortly after regional elections across the country, with the Movement for Socialism winning in three of nine governorates, a spokeswoman from a major organisation representing indigenous women in the Latin American nation said.

"A traitor is the one who flees..." Copa said in a recent statement cited by the spokeswoman.

El Alto residents have also voiced concerns over the meeting between opposition leaders, who have "persecuted, tortured and murdered" indigenous people and called them "human beasts, savages" and others amid the coup.

"Companero Evo was forced to leave the country because his life was in danger, there were express orders to eliminate him and this can be confirmed by those who gave him protection," the spokeswoman said in the statement.

Eva Copa had criticised Morales and other Movement for Socialism (MAS-IPSP) members for fleeing the country despite international law protecting asylum seekers and refugees from political persecution, she added.

Barolina Sisa Resistance
Bolivians Face Major Post-Coup Struggles As Luis Arce Seeks Justice, Economic Reforms, Activist Says
According to her, Copa had never been threatened or persecuted by the coup government and was "building up her own profile", adding Copa had also refused to answer phone calls from Morales and opposed his return to Bolivia.

Copa also opposed the release of seven former MAS-IPSP members exiled at the Mexican Embassy in La Paz, she added.

The statement added that Copa was "instrumental to the dictatorship" and acknowledged the Jeanine Anez coup government as a 'constitutional government of transition' for over a year.

Former President of the Chamber of Deputies, Dr Victor Borda repeatedly and sharply stated Copa had refused to back Bolivia's low-income population amid the coup.

"Eva Copa did nothing for the fallen of Sacaba and Senkata and on the contrary, the day the report was due to be presented, Eva Copa wanted to suspend the session and refused to allow the relatives of the victims to hear the report," Borda, member of the Investigative Commission of the Sacaba and Senkata Massacres said in a statement.

She also passed measures to remove nominated MPs in PARLASUR and the Andean Parliament, among others, "leaving the country defenceless with no international representation" to condemn human rights violations, corruption and others, the statement said, adding Copa had also failed to summon Murillo and others for a parliamentary inquiry.

"No wonder she called the victims of Senkata ‘vandals’ and being a Senator for the city of El Alto herself, she was absent when they needed her most. Of course, she never wanted to acknowledge that there was a coup either and is a pity that Jeanine Anez and her ministers have not been prosecuted when Eva Copa was the Senate President," Colque said.

She also alleged Copa joined the right wing Jallalla group after failing to be elected as a MAS candidate in regional elections this year. Jallalla shared power with other coup plotters and wanted to revoke the legal status of MAS-IPSP, she noted.

"Evo deserves all our respect, support and recognition because this is a man who brought dignity to the forgotten and put an stop to imperialism sending back to Drug Enforcement Administration (DEA), Central Intelligence Agency (CIA), and United States Agency for International Development (USAID)," she concluded.

© REUTERS / POOL
What Is Blinken Thinkin'? Spokeswoman Slams US Official For Double Standards In Jeanine Anez Arrest
The comments come weeks after Bolivian officials warned the United States and Brazilian envoys not to interfere in internal court proceedings against former interim president Anez, who was charged with terrorism, sedition and conspiracy against the Bolivian State in 2019. Anez's detention was extended to six months, sparking outcry from Washington.
...
Reddit
Google+
Blogger
Pinterest
StumbleUpon
Telegram
WhatsApp
200