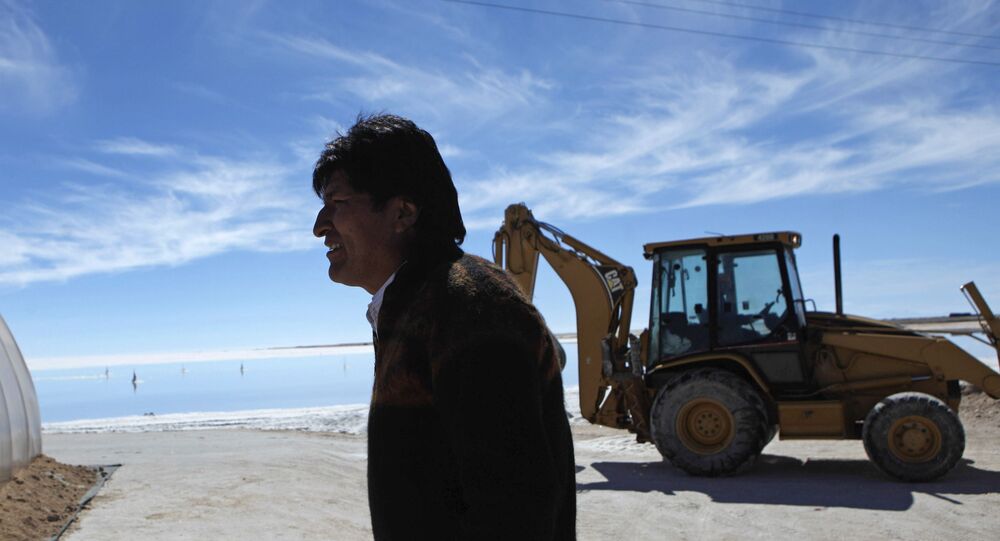 During his March visit to Mexico, Bolivian President Luis Arce told the press that Bolivia had resumed negotiations over the industrialisation of its lithium reserves with Germany and opened the doors to other countries willing to participate in the project.

Bolivia has one of the largest lithium deposits among the countries of Latin America's Lithium Triangle. According to the US Geological Survey's latest lithium report, Bolivia's Salar de Uyuni salt flat alone contains 21 million metric tonnes of the silvery-white alkali metal.

As the world's major players have been seeking to shift from fossil fuels to clean energy over the past several years, the demand for lithium, an integral part of batteries for electric vehicles and power storages, is soaring. Besides this, Li-Ion batteries are indispensible for a whole set of popular rechargeable devices including smartphones, laptops, PDAs and iPods. According to some estimates, the world lithium market may grow by 500% in the next 35 years, making Bolivia's reserves highly important both for the nation and the global market.

To that end, former President Evo Morales began to seek worthy international partners to commercialise the country's lithium riches. The Bolivian president did not want the nation to become a mere exporter of raw materials, but planned to create an entire industrial chain including battery plants and car factories in Bolivia.

"The Strategy for the Industrialisation of Evaporite Resources, drawn up in 2009, contemplated from its inception the construction of cathodic materials plants and batteries in Bolivian territory," recalls former Vice Minister of High Energy Technologies Luis Alberto Echazu, who also served as minister of mining and metallurgy (2007–2010) and vice minister of mining and metallurgy (2006–2007).

"Fifteen companies from different countries presented proposals for the industrialisation of the evaporite complex to form a joint venture with the Bolivian company YLB (Yacimientos de Litios Bolivianos)," the former vice minister notes. "This venture had the state company as its majority partner."

According to Echazu, a foreign company was required to submit proposals for at least the following plants:

• All the aforementioned plants are in Bolivian territory.

"The company that obtained the highest score and was therefore awarded was the German company ACI Systems, all this in the Salar de Uyuni," the former vice minister highlights. In addition to that, ACI Systems Alemania GMbH offered a new technology aimed at speeding up the extraction process by producing lithium hydroxide directly from brine.

© AP Photo / Juan Karita
A track is loaded with salt at a semi-industrial plant to produce potassium chloride, used to manufacture batteries based on lithium, after its opening ceremony at the Uyuni salt desert, outskirts of Llipi, Bolivia, Thursday, Aug. 9, 2012. The salt flats of Uyuni have triggered international interest among energy companies due to its lithium reserves

It was expected that ACI Systems and YLB would establish a plant capable of producing 35,000 to 40,000 tonnes of lithium hydroxide annually by the end of 2022. However, the terms of the joint venture including the royalties for local communities were abruptly opposed by the Potosí Civic Committee (Comcipo). Faced with local pressure, Evo Morales was forced to suspend collaboration with the German firm: "The joint venture was established through a supreme decree, the same one that was repealed by the government, before the coup of October-November 2019," the former vice-minister notes.

"I believe that the Civic Committee has distorted the policy of the Bolivian government," says Echazu. "In reality, their movement was part of the coup d'état and therefore prevented the development of the industrialisation of lithium and other components of brine. This committee has advisers who have worked with the Chilean government and others with a frank neoliberal position, opposed to the development of sovereign policies and social change. For this reason they were part of the coup government of Jeanine Añez, whose objective was to hand over the salt flats and their exploitation to transnational companies, as stated by her ministers."

Similarly, the coup disrupted the Bolivian government's plan to establish a joint venture with TBEA, "but a final agreement was reached on the statutes of the company, only the approval of the supreme decree remained," the former vice-minister emphasises.

Luis Arce is determined to revive Morales' plan and speed up its implementation, judging from the new Bolivian president's Lithium First Industrial Strategy. The strategy, in particular, envisages completing a full assessment of Bolivia’s lithium resources; engaging with leading companies in lithium and batteries from all over the world; ensuring that Bolivia is viewed as the global leader in the lithium industry.

At the same time, Bolivia is seeking to strengthen collaboration with other lithium-producing Latin American states. In late March, Arce visited his Mexican counterpart, Andres Manuel Lopez Obrador, to discuss a set of issues including regional integration and production of the alkali metal. Mexico, like Bolivia and Chile, has significant lithium reserves.

"Cooperation and integration of the economies of our Latin American countries will always be of benefit to our peoples," believes Echazu. "Cooperation in scientific and technological matters could achieve greater progress in large projects for the industrialisation of the enormous natural resources of the region and thus prevent the penetration of transnational companies that only seek to exploit raw materials and loot their reserves."