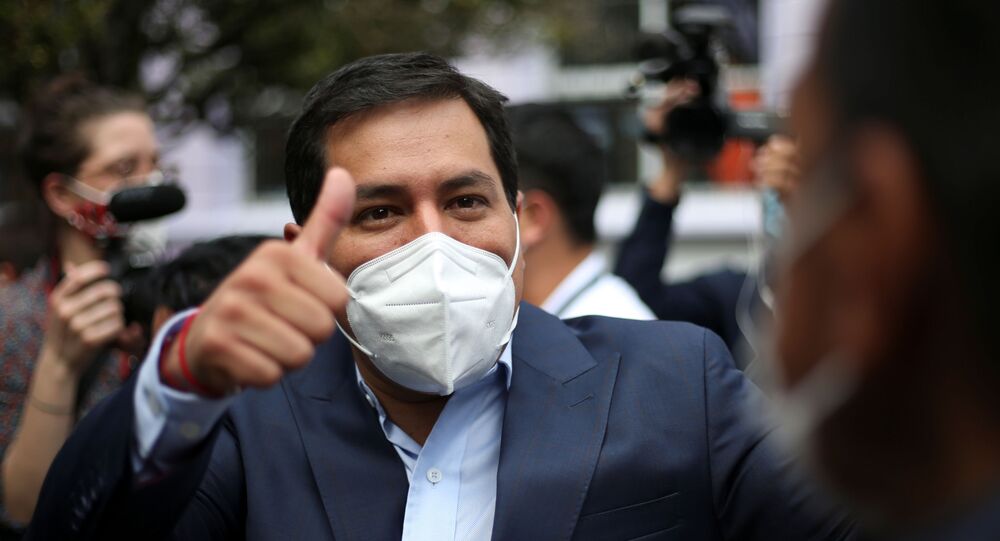 BUENOS AIRES (Sputnik) - Ecuadorian leftist candidate Andres Arauz, from the Union of Hope coalition, has conceded, acknowledging that he has been surpassed by rival candidate Guillermo Lasso in the presidential election runoff.

"After this press conference I will call Guillermo Lasso and will congratulate him on his victory," Arauz tweeted on Sunday. He noted that his election defeat "is not a political or moral defeat" because all of the candidates are striving for a better future for Ecuadorians.

"I just spoke with @LassoGuillermo to congratulate him on his success and to get to work together on issues that our countries have in common," Luis Lacalle Pou tweeted on Sunday.

"I just spoke with @LassoGuillermo who today won presidential elections in Ecuador. Congratulations and good luck to Guillermo, who is a good personal friend and a great friend of Chile," Pinera said on Twitter on Sunday.

He added that Guillermo now faces the challenge of moving Ecuador forward and improving the life of the Ecuadorian people.

According to Ecuador's National Electoral Council, with 96.35 percent of the votes counted in the Sunday presidential runoff, Guillermo Lasso from the CREO right-wing movement has 52.55 percent, while Arauz has 47.45 percent.

Ben Norton: How Both Flavors of Neoliberalism Lost in Ecuador Election

Ecuador's Elections Are Being Undermined by Foreign and Domestic Interference, Ex-Diplomat Explains