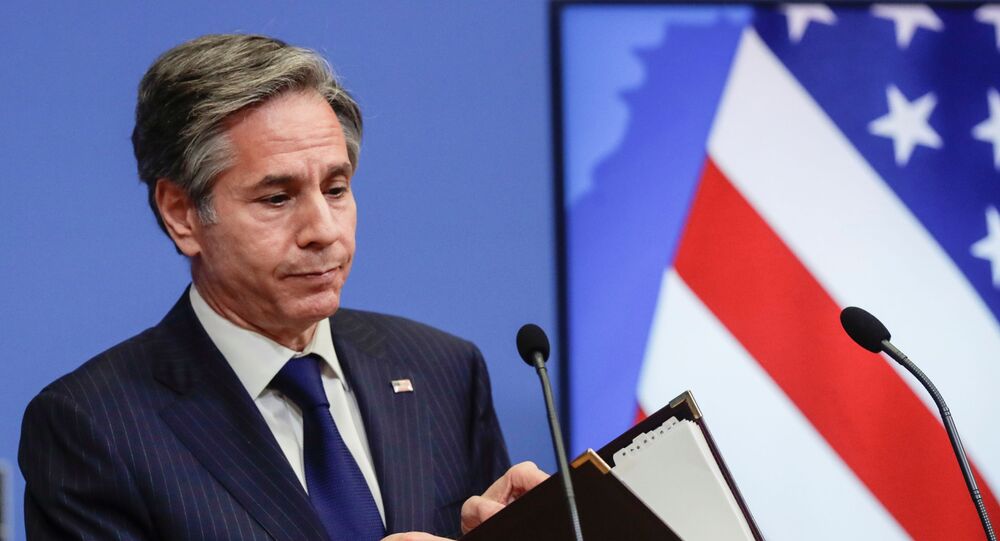 A spokeswoman representing indigenous people in Bolivia slammed comments from a top US official who urged the release of an alleged political prisoner involved in a political coup, killing scores of people and injuring hundreds, it was revealed this week.

The United States voiced concerns over right-wing protesters storming the US Capitol building in early January but encouraged "exactly the same activity" in Latin America against governments who disagreed with Washington's Monroe Doctrine, "treating us like Uncle Sam's backyard", Colque said in a statement.

© REUTERS / DAVID MERCADO
Anez Open Letter Suffers 'Total Amnesia' of Bolivian Coup Human Rights Violations, Spokeswoman Says
"If we want an endless supply of political hypocrisy, all it takes is the US State Department," she said.

Blinken claimed the Luis Arce administration had "politicised its legal system" but the envoy failed to condemn paramilitaries, police and military officials involved in "an arbitrary and lawless process to crush a democratically elected" Bolivian government, she added.

"Evo Morales, the first indigenous president whose government was democratically elected, was overthrown and [received death threats]," she said in her statement.

Colque explained the Jeanine Anez coup government had deployed "looters, arsonists and torturers" backed "with open arms" by the US government.

© AP Photo / Ng Han Guan
China Slaps Sanctions On US 'Pro-Democracy' Officials Accused Of Meddling In Hong Kong, Report Says
The former coup administration had been removed from power and was being prosecuted for human rights abuses via "sovereign Bolivian judicial laws and following due process", she explained.

She said: "Are they afraid that the dirty deals of their ‘intelligence’ agencies will be exposed, as it happened in Chile, Argentina and all the web of what was Operation Condor? At least they are consistent in their belief in impunity."

The Anez dictatorship had murdered 37 indigenous people, wounded 800 and imprisoned thousands of men and women "after torturing them" she said.

The coup government was "like living under the Bolivian Klu Klux Klan (KKK) or Apartheid in South Africa", she said.

She added human rights abuses were similar to those in the US "where its police kills [African-Americans] in the growing wave of racism, discrimination and white supremacy".

"The problem for Mr. Blinken is that they are doing it to his ‘good friends’. Perhaps then he should join his ‘true friends’ in the [right-wing] militias that climbed the steps of the Capitol," she said.

Klaus Barbie, or 'The Butcher of Lyon', had been "expressly" sent to Bolivia and later became an advisor to the Hugo Banzer and Luis García Meza governments.

"So, what morals do they have for wanting to give us lessons on how to govern our country, when they are skillful in meddling in internal affairs, invading countries, sowing hunger, death and destruction," she said.

Bolivians were calling for justice for the victims of the former Anez coup government, with many "dead, wounded, imprisoned and disappeared".

Blinken chose to sympathise with the former coup administration, who wanted to "wipe out the indigenous people" similarly to the KKK, she said.

Bolivians had reclaimed democracy in October last year and would "defend our democratic rights, our free expression, our natural resources" against neoliberal forces seeking to destabilise the country and reinstall dictatorships, she added.

Ms Colque concluded: "Enough of imperialist meddling! Bolivia is not a colony!"

Background on US Statement, Detainment of Anez Government Officials

The news comes after the US Secretary of State said the US would join the European Union, Bolivian Catholic bishops and numerous rights groups who had "publicly raised serious questions regarding the legality of these arrests... apparent violations of due process in their execution, and the highly politicized nature of the Bolivian government's prosecution."

The statement comes just days after Bolivian foreign minister Dr Rogelio Mayta warned US and Brazilian envoys to "not interfere" in its internal affairs over the Anez legal processes.