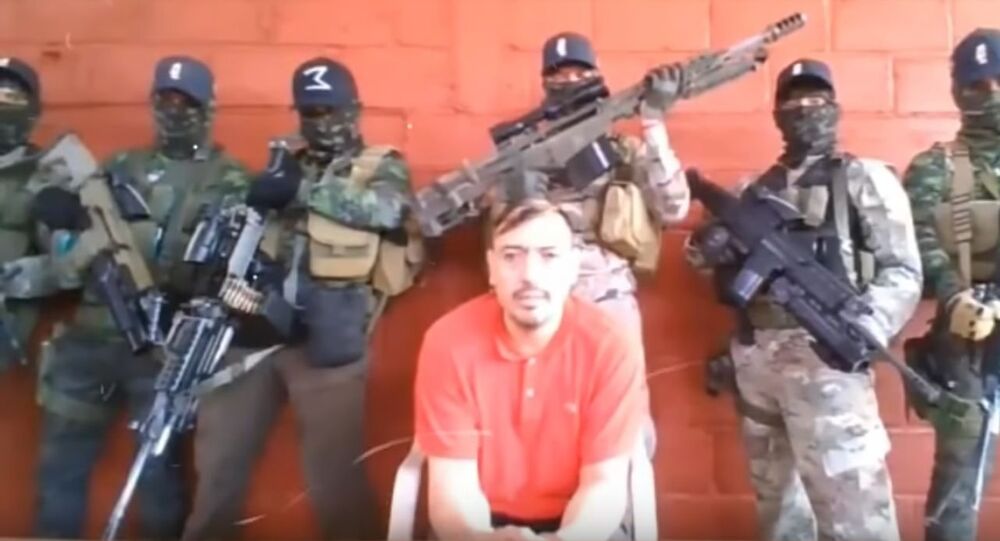 The corpse was reportedly discovered hours after "El Cholo" emerged in a YouTube video asserting that he had collaborated with police against a rival drug cartel.

Mexican authorities have suggested that a body found wrapped in plastic in the city of Tlaquepaque belongs to Carlos "El Cholo" Sanchez, a notorious drug cartel leader.

The corpse, which has yet to be officially identified, was reportedly discovered lying on a park bench near the Tlaquepaque city hall building last Thursday. Tlaquepaque is located near Guadalajara, the capital of the western Mexican state of Jalisco.

Mexican media cited unnamed police sources as saying that the body was found wrapped from head to toe, with two signs pinned to it and two large knives jutting out from it. One sign in Spanish read "the traitor El Cholo", which is the nickname for Carlos Enrique Sanchez, according to the sources.

This came shortly after the emergence of a YouTube video showing the handcuffed Sanchez being held in front of what looked like armed members of the Jalisco New Generation Cartel and claiming he cooperated with police.

© AFP 2021 / Ivan Israel Orozco Garcia
Grab taken from a video of policemen inspecting a burnt police vehicle on April 7, 2015 on a Jalisco state road, Mexico, where at least 15 police officers were killed, overnight, in an ambush carried out by a gang called "Jalisco New Generation Drug Cartel".

Sanchez earlier broke off from the Jalisco gang, forming his own Nuevo Plaza Cartel (New Plaza Cartel) in 2018. The two cartels have since been at war over control of the methamphetamine trafficking in Guadalajara and beyond, which in turn led to an escalation of violence in the area, Mexican News Daily reported.

Commenting on the matter, Jalisco Attorney General Gerardo Octavio Solis Gomez said "this material confirms the existence of an orchestrated strategy to destabilise the state by an organised crime group".

© Photo
One of Mexico’s Biggest Drug Cartels May Boast Armoured Cars, Fully Equipped Forces - Video
According to him, "everything indicates that it's […] Carlos Sanchez […], nicknamed 'El Cholo.'"

Mexico City police officer Garcia Harfuch, meanwhile, has rejected Sanchez's allegations that they both cooperated against the Jalisco New Generation Cartel as "false".

"My commitment to society is firm, fighting crime to the last consequences", Harfuch tweeted.