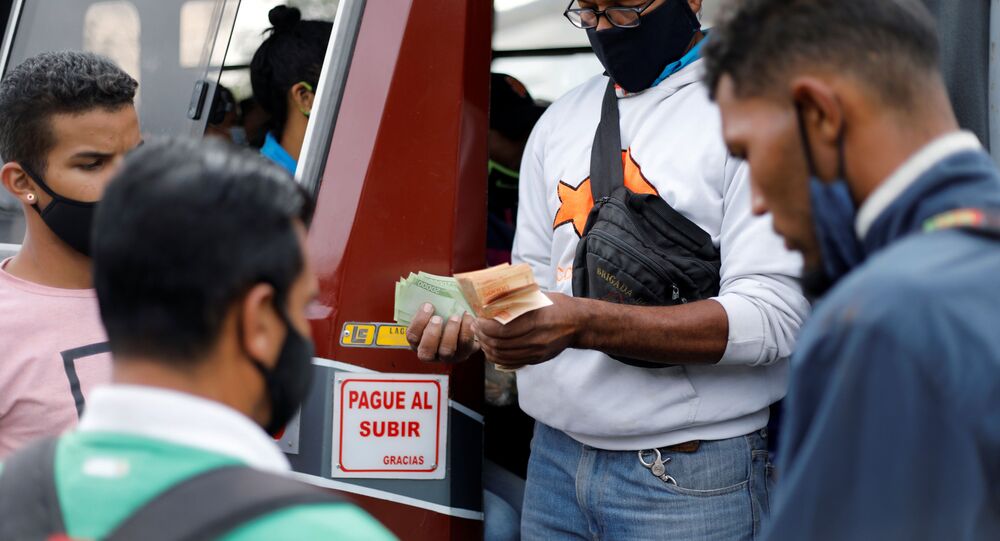 The country's economy is in chaos after several years of recession followed by US economic sanctions that deprived Venezuela of one of its main sources of income - the sale of oil. Despite the change in administration, the White House is reportedly not planning to lift sanctions unless Maduro makes moves to resign.

The emphasis on transportation might seem a bizarre decision but there's method to this madness: transport is one of the last spheres of the economy where bolivar bills continue to be used amid severe cash shortages caused by the country's hyperinflation.

Three-quarters of all bolivars in circulation are used by Venezuelans to pay their public transport fares which does not accept cards or other digital means of payment. A round trip fare costs around 400,000 bolivars (20 US cents) – the limit for cash withdrawal at banks.

As Venezuela struggles to keep cash flowing by printing new bills worth 1 million bolivars, President Nicolas Maduro reckons the economy's salvation lies in "digital bolivars" where all payments in the national currency are made via debit and credit cards.

Although this plan is unlikely to halt inflation - which hit 2,665 percent last year - it is likely to spare Caracas the headache of buying more secure paper for bills and save some money on printing them. Asked by journalists whether the country was going to ditch paper money altogether, Maduro confirmed that that is what he intends.

"Yes, it is disappearing. For Venezuela that is a big advantage," Maduro said.

At the same time, Venezuela has so far dismissed plans of abandoning the bolivar or creating a new national currency as it had in former times of hyperinflation. Still, many Venezuelans use US dollars as a substitute for scarce bolivar cash. Greenbacks are widely accepted in the country, including in public transport.

The de-facto "dollarisation" of the Venezuelan economy did not happen without Maduro's blessing - he referred to the use of the greenback as an "escape valve" to US sanctions which are blamed by Caracas for the country's severe economic woes. Venezuela's economy has been in recession for years, but things turned even worse after the US slapped the country with economic sanction in 2018 demanding that Maduro resign from his post. The economic measures have severely limited Venezuela's ability to sell oil, one of the main sources of its income, but according to media reports, Caracas found a way to smuggle some of it despite the sanctions.