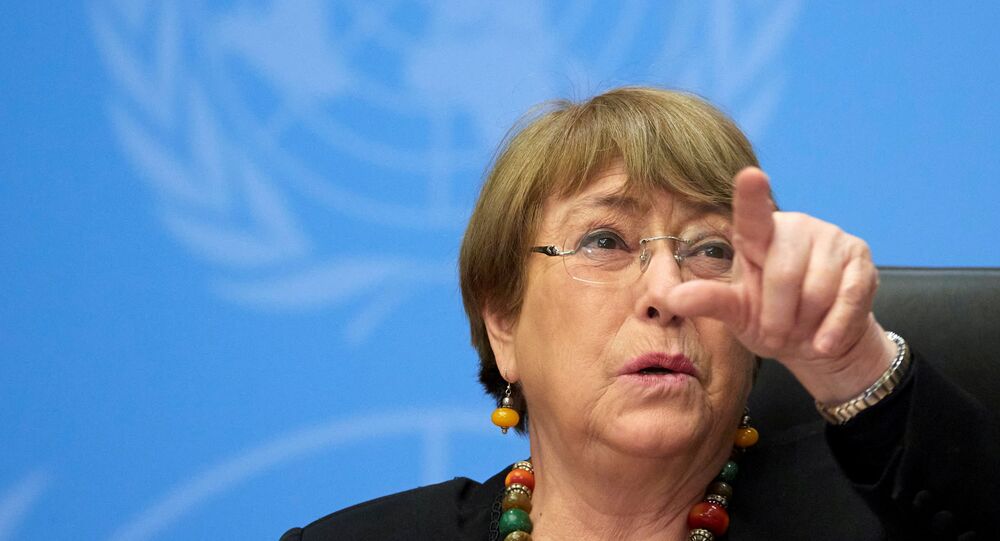 While a damning report last month by a United Nations human rights expert called attention to the catastrophic effects of economic sanctions against Venezuela, a new report by the UN High Commissioner on Human Rights ignores those findings, faulting the government for the effects of the sanctions and other meddling by foreign powers.

The Venezuelan Foreign Ministry has fired back after the United Nations’ human rights chief heavily criticized the country’s internal situation in a report, saying the liaison has fallen victim to false narratives from anti-government forces.

“Venezuela regrets and rejects the misleading statements of the High Commissioner, Michelle Bachelet, at the 46th ordinary session of the UN Human Rights Council,” Venezuelan Foreign Minister Jorge Arreaza tweeted on Thursday. “It is worrying that the High Commissioner will lose her rigor and objectivity in the face of pressure from anti-Venezuelan actors.”

​In the statement, Arreaza accuses Bachelet of filing an “unbalanced” report catered to the demands of the United States and the “self-styled” Lima Group, a collection of Latin American nations with right-wing governments dedicated to achieving regime change in Venezuela.

In January 2019, then-US President Donald Trump provided extensive political and financial backing to Juan Guaido, an opposition politician who declared himself to be Venezuela’s interim president and mounted several coups d’etat attempts. Despite months of violence and the imposition of crushing economic sanctions, Guaido’s movement failed to generate significant support. Nonetheless, dozens of nations, most of them European, have recognized Guaido’s claims, with the administration of US President Joe Biden reaffirming them after taking office earlier this year.

Bachelet Names Problems, But Not Causes

The sanctions have cut off the oil-exporting nation from nearly all of the income it would use to buy food, medicine, and other supplies, as well as attacked the government’s primary mechanism for guaranteeing affordable and equitable food distribution, creating a humanitarian situation that Bachelet called attention to in her report without naming the cause.

“Since September, the access to basic services like medical assistance, water, gas, food, petrol, has continued to be scarcer, and was further limited by the effect of the pandemic,” she told the UN High Council on Human Rights on Thursday. “This contributed to sparking social protests, and severely compounded the humanitarian situation.”

“Some associations report that average wage would now be under 1 US dollar per month while the price of the food basket is estimated to have increased by 1,800% over the last year. About one third of Venezuelans would now be living in a situation of food insecurity,” Bachelet added.

Her report likewise called attention to people detained by Venezuelan police, including several activists charged with money laundering and terrorism, and a “shrinking civic space.”

Some of the more recent attacks on Venezuela’s economy have been against its fuel sector, with the US seizing oil purchased from Iran and selling it instead of allowing it to be delivered to its Venezuelan buyer, and Washington has also clamped down on “swap agreements” that saw Venezuela trade crude oil for refined products.

Bachelet’s report follows the same pattern that Sputnik documented in July 2019: faulting only the Venezuelan side of the conflict and ignoring the causes of shortages as well as political violence.

While Bachelet failed to name sanctions as the cause, another top UN official called direct attention to the destructive effects of the de facto embargo. Alena Douhan, the United Nations Special Rapporteur on the negative impact of unilateral coercive measures on the enjoyment of human rights, flatly called them a violation of human rights and of the “principle of sovereign equality of states.”

“Unilateral sanctions increasingly imposed by the United States, the European Union and other countries have exacerbated the above mentioned challenges. The Government’s revenue was reported to shrink by 99% with the country currently living on 1% of its pre-sanctions income,” Douhan wrote. She added that the resulting four years of hyperinflation “have resulted in the total devaluation of the national currency,” which has caused public sector salaries to shrink considerably and contributed to “a growing poverty level.”

In the aftermath of Douhan’s report, Maduro took his case to the UN Human Rights Council directly, traveling to Geneva to appeal for relief from US sanctions, which he said “demonstrate great cruelty.”

Days after Douhan’s report hit, a group of progressive Democratic lawmakers also sent a letter to Biden urging him to drop the sanctions amid “catastrophic humanitarian consequences,” especially relating to the fight against the COVID-19 pandemic.

Even the US Congress’ own Government Accountability Office has found serious humanitarian faults with US sanctions, noting they were partially responsible for imploding the Venezuelan economy in a report also published last month.

In 2019, before the worst sanctions had been imposed on Venezuela, a report from the Center for Economic and Policy Research (CEPR) think tank found US sanctions had already caused 40,000 excess deaths and noted hundreds of thousands more in vulnerable groups whose medicinal supplies had run dry, including people with HIV/AIDS, diabetes, and cancer.

Venezuela to Continue Moving Forward Regardless of US Sanctions, Foreign Minister Says