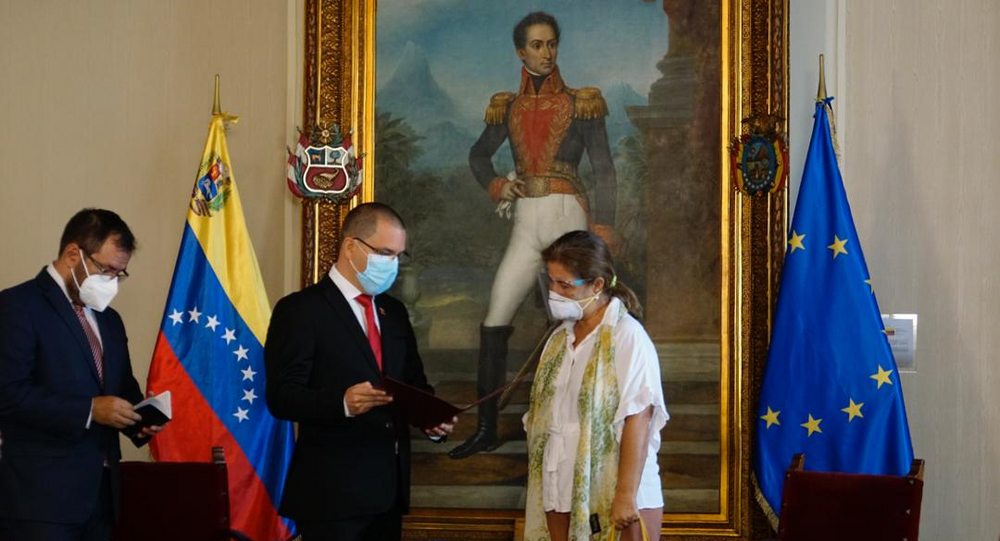 MOSCOW (Sputnik) - The International Contact Group on Venezuela (ICG) on Thursday rejected the decision of the Venezuelan authorities to call the head of the bloc's delegation in Caracas, Isabel Brilhante, persona non grata and expel her.

Caracas announced the decision regarding the EU diplomat in late February in response to Brussels' recent move to add 19 Venezuelan officials to an EU sanctions list over their roles in "undermining democracy and rule of law" in the country.

"The following Members of the International Contact Group on Venezuela (ICG), Chile, Costa Rica, the Dominican Republic, Ecuador, the European Union, France, Germany, Italy, the Netherlands, Panama, Portugal, Spain, Sweden and Uruguay, reject the decision of the Venezuelan regime to declare the Ambassador of the European Union persona non grata," the ICG said in a joint statement, published on the European External Action Service's website.

The group said that the diplomat's booting would only contribute to the greater international isolation of Venezuela and call for maintaining "the spirit of dialogue and collaboration" between the Latin American country and the international community.

© REUTERS / MANAURE QUINTERO
US Warns Expulsion of EU Envoy From Venezuela Will 'Further Isolate Maduro Regime'
Venezuelan officials were sanctioned in response to the December parliamentary elections in which President Nicolas Maduro's party won over 91 percent of the vote, securing 253 out of 277 seats in the legislature. According to the EU, the voting process fell short of international standards and was a "missed opportunity for freedom."

On February 26, the EU declared the head of the Venezuelan diplomatic mission in Brussels, Claudia Salerno Caldera, persona non grata, responding to a similar move by Caracas.