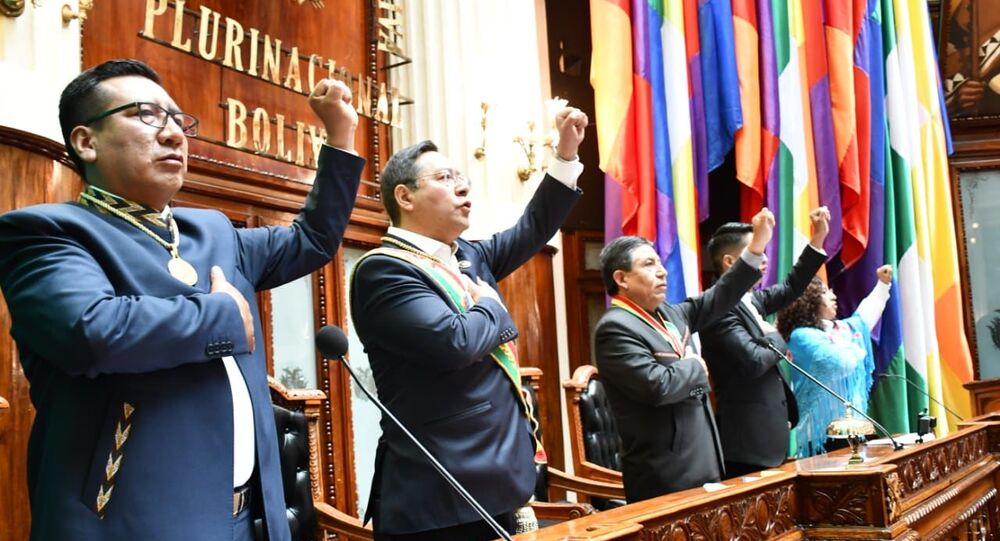 Following the win of Evo Morales' former minister of economy, Luis Arce, in Bolivia's October elections, the country's economy has grown, says Bolivian journalist and political analyst Aberto Echazu, adding that the Bolivian opposition has not laid down arms.

Luis Fernando Camacho, the leader of right-wing political alliance Creemos and one of the most vocal proponents of Evo Morales' ousting in November 2019, has thrown his hat into the Santa Cruz gubernatorial race. Speaking to Bolivian daily Página Siete on 3 January, Camacho said that he had made the decision to run after the snap October elections, which ended in a landslide victory for Luis Arce, the Movement Towards Socialism (MAS) presidential candidate.

"Both Camacho and Anez have registered as candidates, in a move that would make them unpunished," the political analyst explains. "Camacho is running for governor of Santa Cruz, and a recent alliance with the rival oligarch fraction has paved the way for him to establish his lead. He started a 'Federal Bolivia' campaign, an expected move as his separatist project will now focus on the wealthy department of Santa Cruz."

For her part, Anez left the Democrat Social Movement and is now running for governor in yet another right-wing alliance, according to him. "Anez announced her desire to run for governor of Beni just a couple of days before the close of the inscription of candidacies," Echazu adds.

"Those cases are evolving slowly," the analyst elaborates. "The MAS government's will to restore institutionalism means that it is expecting to have the conclusive reports from the Inter-American Commission on Human Rights (IACHR) regarding the Senkata and Sacaba massacres so that this matter won’t be a new cause for economic powers and irregular groups to start a new destabilisation movement."

One of the many ironies is that, in 2019, US elites cheered a violent coup in Bolivia that removed Evo Morales based on completely fabricated claims of election fraud (specifically, that Morales' vote totals increased as outlying pro-MAS areas were counted). https://t.co/zarNVPg432

Since MAS returned to power, the social and political situation has changed completely, bringing an end to the year-long crisis which followed the coup, explains Echazu.

"Once a legitimate government was elected, the political instability withered away along with the social turmoil," he says. "The people went back to their normal lives, and not just the privileged and the wealthy as was the case with the de facto government, but all of the Bolivian population resumed their everyday life as usual."

On the other hand, however, the economic situation has not been restored to the pre-coup reality so far, according to the journalist. He says that the de facto Anez government "left the country in shambles" and "reactivating the successful Productive Communitarian Social Economic Model will take some time, especially picking up from the disaster that was the neoliberal restoration that the coup-borne regime installed."

To date a series of measures have been taken by Arce’s cabinet in order to reactivate the economy, Echazu says, adding that "this has a direct relation with the projected economic growth for the country in 2021, which will be around 5.1% according to the Economic Commission for Latin America and the Caribbean (ECLAC), and will be among the highest in the region."

Arce subsequently proposed increasing public investment, delivering bonds and loans with low interest to producers, and imposing a permanent tax on the wealthy. In addition to this, the nation is seeking to step up sales of natural gas to the Southern Cone Countries, which includes Argentina, Chile, Brazil, Paraguay, and Uruguay. On 24 December, President Arce and Minister of Hydrocarbons and Energy Franklin Molina announced the discovery of more than 300 bln cubic metres of natural gas in the Boicobo Sur X-1 well, located in the Huacaya region of Chuquisaca, according to The BNamericas.

In addition to the economic difficulties, the Arce government is dealing with the coronavirus pandemic. However, instead of implementing strict lockdowns measures, like his predecessors did, the Bolivian president has placed emphasis on mass testing and vaccination.

A political conflict in Bolivia is about whether to impose lockdown.

The neoliberals (Carlos Mesa) advocate it because they represent the rich who would be unaffected economically. The MAS are instead focussing on mass testing & vaccination, so as to protect working class jobs.

​"Big steps have been made regarding the pandemic," says Echazu. "2.2 million tests have been secured and will arrive in the country next week, making a substantial jump from the no-testing irresponsibility that characterised the de facto government regarding COVID detection. Millions of vaccine doses have also been secured, and the government announced that it will not allow profit-making from the vaccines, making universal coverage a priority."

Arce’s government also secured another big batch of vaccines through the COVAX mechanism, which will ensure 30 percent of the country’s 11.5-million population gets inoculated, according to the journalist. According to the Gavi Vaccine Alliance, COVAX is one of three pillars of the Access to COVID-19 Tools (ACT) Accelerator launched in April 2020 by the World Health Organisation (WHO) together with the European Commission and France to curb the pandemic's spread.

​Furthermore, on 30 December 2020, the Russian Direct Investment Fund (RDIF) announced that it had agreed with La Paz to supply the Andean nation with the Sputnik V coronavirus vaccine to immunise 2.6 million people. The president's spokesman Jorge Richter recently announced that Arce will inoculate himself with Sputnik V later this month. "It's a sign of confidence in the vaccination process that we are carrying out," the spokesman underscored, as quoted by Reuters.