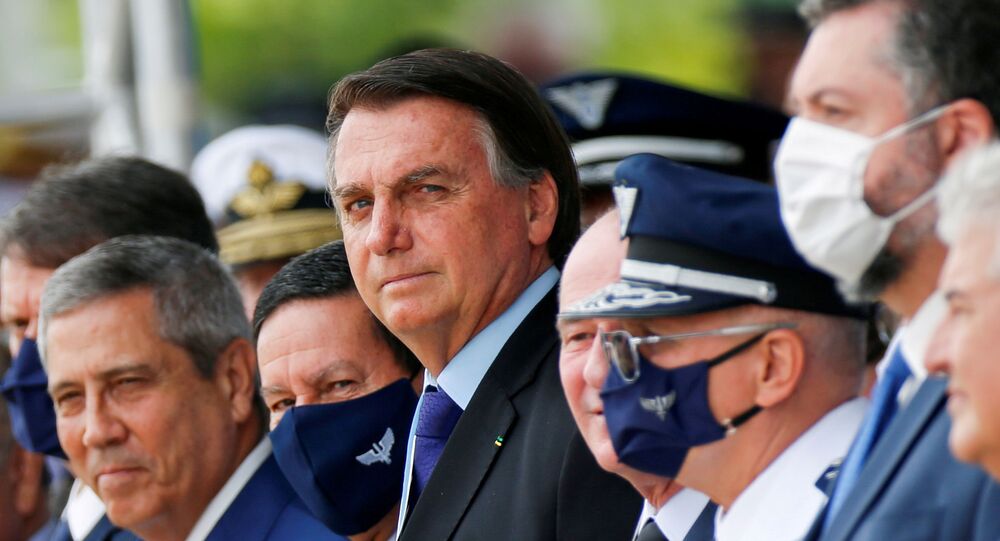 Although Brazil has a past record of successful vaccination programmes, it has been caught unprepared when it comes to anti-COVID inoculations, says Brazilian scholar Gustavo Guerreiro, alluding to apparent political roots behind the situation.

While Chile, Argentina, Mexico, and Costa Rica have already started inoculating their populations, Brazil has yet to kick off its own immunisation process.

On 10 December, Anvisa, Brazil’s national sanitary regulator, gave laboratories permission to request the authorisation for the emergency use of coronavirus vaccines. On 31 December 2020, the agency green-lighted the import of two million doses of the AstraZeneca vaccine produced by India's Serum Institute. However, no specific vaccines have been authorised by Anvisa yet. Brazil has been hit hard by the pandemic having registered over seven million coronavirus cases and 198,974 virus-related deaths to date, according to the Johns Hopkins University.

Vaccination is 'Not Taken Seriously' by Bolsonaro

Brasilia's response to the coronavirus outbreak has been "too little too late" from the outset, according to Gustavo Guerreiro, executive editor of the journal World Tensions and a member of the Brazilian Centre for Solidarity with Peoples and Struggle for Peace (CEBRAPAZ).

"Close to 200,000 have died, the president of Brazil even made fun of those who get the vaccine, saying with laughter that people 'are going to become alligators'," the scholar said. "Since the beginning of the pandemic, Bolsonaro has taken a negationist stance. Perhaps the explanation for this has political and economic roots."

The Brazilian president has long opposed lockdown measures and denounced the outbreak of the novel coronavirus as a media stunt. On 5 January 2021, Bolsonaro claimed that his country was "broke" and that he couldn’t "do anything" about it, while pinning the blame on what he called the "press-fuelled" pandemic. "I wanted to modify the tax reduction table, but there was that press-fuelled virus that we have there," the Brazilian president said.

"Bolsonaro has repeatedly tried to associate economic disaster with measures to combat the pandemic," Guerreiro says. "Hence the false dichotomy fuelled all the time not only by Bolsonaro, but by several right-wing leaders around the world, 'either the market is saved at the expense of some lives, or we all die'."

According to the International Monetary Fund (IMF) December 2020 report, Brazil's economic activity contracted by 7 percent in the first half of 2020, while its unemployment rate rose to 14.4 percent in September. The report said that the country's economy is projected to shrink by 5.8 percent in 2020, which is expected to be followed by "a partial recovery to 2.8 percent in 2021." While Brazil's neighbours view anti-COVID inoculation as a chance to stop the economic slide, the president has ridiculed their efforts, Guerreiro remarks.

Bolsonaro still has 35 percent approval rating, according to a recent survey, released on 16 December by the National Confederation of Industry (CNI). This means that "everything he officially declares still has a considerable weight in the opinion of a large part of the population, although his popularity is waning," the scholar notes, referring to social media disputes over COVID and anti-vaccine demonstrations.

© AP Photo / Eraldo Peres
people stand outside the entrance of the Brazilian National Health Surveillance Agency, where studies on the application of the Chinese CoronaVac vaccine are being analyzed, in Brasilia, Brazil, Wednesday, Oct. 21, 2020. Brazil’s President Jair Bolsonaro rejected on Wednesday the announced purchase of 46 million doses of the potential vaccine being developed by a Chinese company and tested in Sao Paulo, a state governed by his political rival, prompting concern he was allowing politics to steer public health decisions.

Brazil used to be a role model for other Latin American states due to its comprehensive attitude to vaccination, writes The Guardian, citing the country's microbiologists and health experts who lament the government's inconsistent handling of the COVID outbreak.

In April 2017, WHO lauded Brazil's "highly effective National Immunisation Programme" stressing that the country's "routine vaccination coverage averages above 95 percent." "Most of the vaccines are produced through local manufacturers and provided free of charge in more than 36,000 public health care facilities throughout the country," WHO wrote.

Anvisa has played a crucial role in the regulation and approval of pharmaceutical drugs and sanitary standards since its foundation in 1999 under President Fernando Henrique Cardoso, as an independently administered body, according to the Guerreiro.

He notes that the state agency – "recognised for excellence both in its regulatory performance and in the credibility of its actions and decisions" – has been "the target of political manipulation by the federal government in recent months" since the pandemic began.

"The Anvisa Servers Association, published earlier this month an open letter in response to the interventions made by President Jair Bolsonaro, affirming the independence of the organ and its importance for society," the scholar says. "Last month, Bolsonaro appointed Lt. Col. Jorge Luiz Kormann as director of the Agency. This reinforced the rigging suspicions."

According to the scholar, Bolsonaro is influencing state agencies and universities through his appointments. Given the chaotic vaccination plan, this interference can not be called effective, he argues.

Meanwhile, on 6 January, Health Minister Eduardo Pazuello announced that Brazil will have 354 million doses of vaccines against COVID-19 guaranteed for this year, according to Agencia Brasil. This includes 254 million doses to be produced by the Oswaldo Cruz Foundation (Fiocruz) in partnership with AstraZeneca, and 100 million shots made by Butantan, the Latin American largest immunobiologicals and biopharmaceuticals producer, in partnership with the company Sinovac.