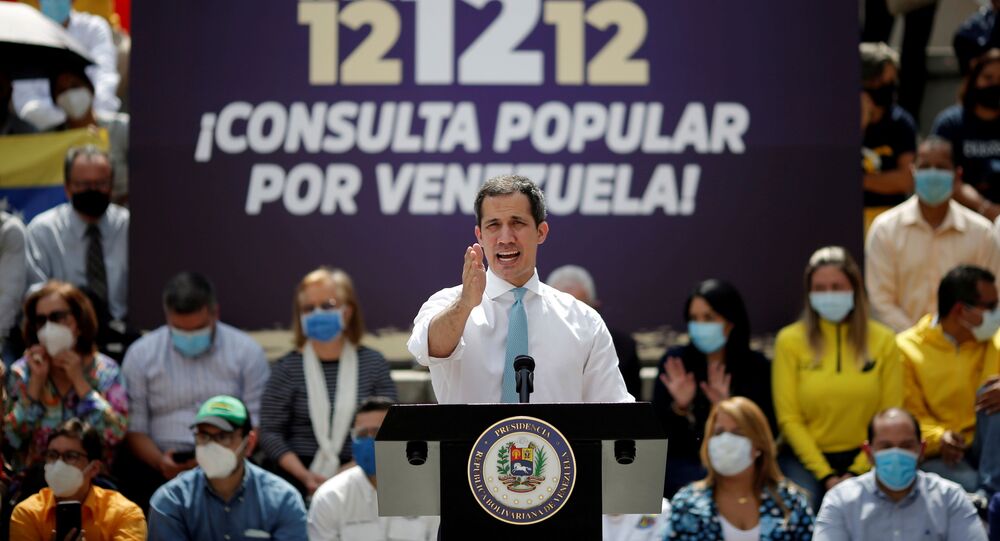 Washington has been putting pressure on Caracas with hefty economic sanctions for nearly three years in an attempt to force its democratically elected President Nicolas Maduro to resign from his post and hand over his power to the opposition.

The US Treasury has issued a licence that would allow government agencies and businesses to conduct certain transactions without fearing sanctions from the Venezuelan opposition, including its prominent figure Juan Guaido, who proclaimed himself the country's interim president. According to the Treasury, any official, designate, or representative "appointed" by Guaido to "act on behalf of the government of Venezuela", also enjoys this waiver.

© REUTERS / MANAURE QUINTERO
FILE PHOTO: Opposition leader Juan Guaido speaks to the media during a news conference the day after the parliamentary election in Caracas

Those who are exempt include the so-called "National Assembly" – a group of Venezuelan opposition members, who dominated the previous convocation of the nation's parliament, but voluntarily boycotted the 2020 general election in the country. The group instead proclaimed that they extend their "authority" as the country's parliament for one year, claiming that the 2020 election were "unfair" and refusing to recognise the victory of Nicolas Maduro's party, the United Socialist Party of Venezuela, which secured the majority.

Washington previously allowed Maduro and his allies from the opposition to have access to certain Venezuelan assets, which had got frozen in the US since the White House started pressuring Maduro with economic sanctions to force him to leave the post of the president. The White House claims that the last presidential election in Venezuela in 2018 was illegitimate and refuses to recognise Maduro as democratically elected although it has not provided any evidence for its accusations.

Instead, Washington recognised Guaido - who was speaker at the National Assembly at the time - as interim president and several other western states have backed this view. Russia, Turkey, China, Iran and several other countries objected to the actions of the western powers as undermining Venezuela's stability and have thrown their weight behind President Maduro.

US Authorizes Transactions With Venezuela’s PDVSA Through July 21, 2021

Iranian Ship Arrives in Venezuela for More Oil Despite US Sanctions, Media Says