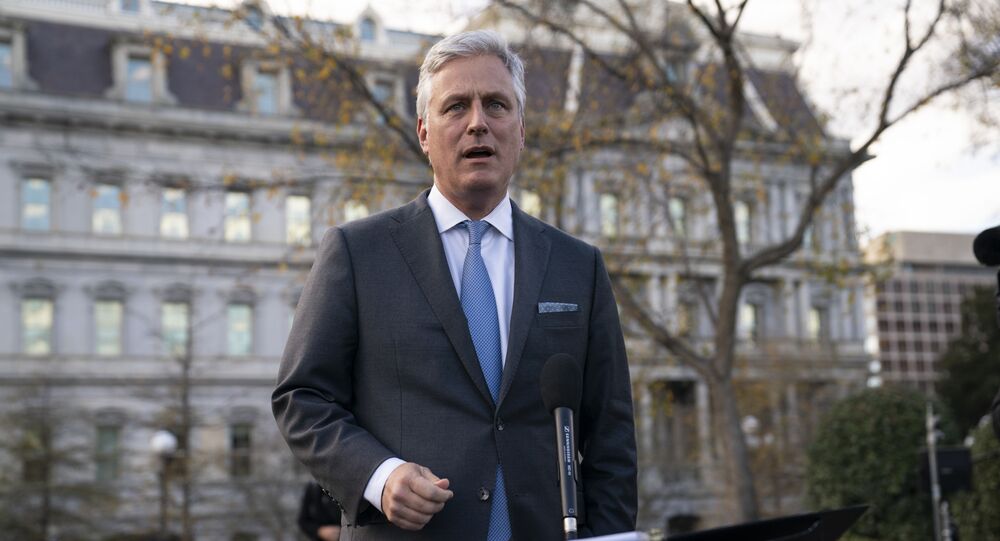 Venezuela is set to hold its regular National Assembly deputies election on Sunday. This election is going against the background of the ongoing political crisis in the country, as the unicameral parliament is controlled by an opposition led by its speaker, Juan Guaido, whom around 50 western countries have recognized as the interim president.

US National Security Advisor Robert C. O'Brien criticized the upcoming Venezuelan parliamentary election, suggesting that it will not do any good for the future of the South American country, in a statement tweeted by the United States National Security Council on Saturday.

O'Brien, Trump's fourth appointee to the position since the latter took office, claimed that the upcoming Sunday election would be rigged by the "illegitimate Maduro regime" just as Caracas continues to "subvert democracy" in the state.

"This election only serves to keep Maduro in power and does nothing to build a better future for the people of Venezuela. The US will continue its unwavering demands for freedom, basic human rights, the rule of law, and truly fair elections in Venezuela", O'Brien stated.

O'Brien said that the US is waiting for Venezuela to become a "free and prosperous" state, and a "cornerstone" in the Western Hemisphere.

(3/3) We look forward to the day when a free and prosperous Venezuela is a cornerstone of the Western Hemisphere.” – NSA Robert C. O’Brien

The Trump administration has raised concerns over the upcoming election as Washington has been supporting opposition politician Juan Guaido since 2019, when the latter proclaimed himself the interim president of the country in defiance of Maduro's second term win.

Venezuela election amidst the political crisis

This election to the National Assembly of Venezuela, its unicameral parliament, will be the 26th since the start of Hugo Chavez's left-wing era in 1998, after he was elected president. Citizens will elect 277 new parliament members from 107 registered political parties for a 5-year term, making this new board of the nation's deputies 110 seats larger than the present group.

The United Socialist Party of Venezuela (PSUV), founded in 2007 by then-president Chavez, is seeking to regain control of the National Assembly, the only governmental body not run by Maduro loyalists. The PSUV, an heir to Chavez policy, is supported by a wide range of parties aligned with the government or personally loyal to Maduro.

The current Venezuelan parliament was unexpectedly won by a unified opposition in the 2015 election, gaining an absolute majority of seats. This turn of events was made possible against the background of a severe world economic crisis and 2014 protests in Venezuela, as well as moves by the ruling party that saw increasing tensions between the opposition and Maduro's government.

In light of the ever-deepening crisis, the National Assembly was stripped of its legislative powers in 2018 by the Constituent assembly, which subsequently became the country's legislature. The National Assembly speaker, Juan Guaido, soon became the opposition leader of the country and, backed by US and European countries in 2019, proclaimed himself an interim president in an attempt to remove Maduro from power.

The situation deteriorated in January, as Guaido and his supporters were blocked entrance to the parliament, as the PSUV elected a new pro-Maduro speaker.

The pro-government parties are expected to prevail in this election, according to some, since the approval rate of Venezuelan opposition and Guaido in particular has reportedly fallen.

Tension between the US and Venezuela

For the several past years, the Trump administration has been seeking ways to oust Maduro from power, mostly by imposing sanctions that increase pressure, and targeting state-run oil companies such as PDSVA, which has deepened the economic crisis in the country.

Tensions between the United States and Venezuela burst after the US recognition of Guaido as the interim Venezuelan president. Russia and China, among the other nations, still recognize Maduro as the legitimate leader of the country. Maduro has accused the Trump administration of orchestrating several unsuccessful coup attempts in the country.

This week, the US Treasury imposed new sanctions on the China National Electronic Import-Export Company, which has been supporting the Venezuelan government's cyber efforts since 2017, according to the department.