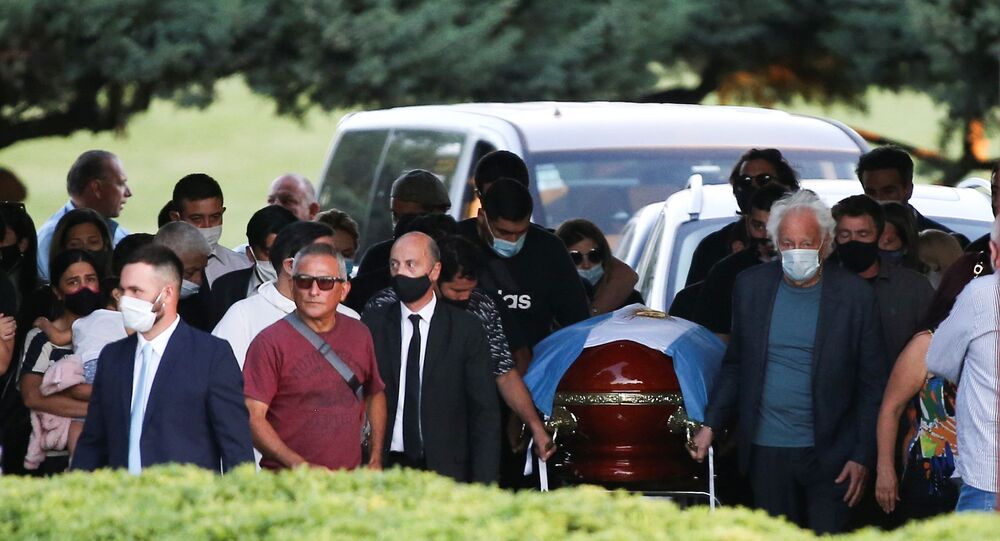 Football legend Diego Maradona died on 25 November at the age of 60 from a cardiac arrest. Thousands of people took to the streets of Buenos Aires to pay tribute to the Argentine star, who was later buried at a cemetery in the Bella Vista residential area.

Argentine funeral worker, Claudio Fernandez, told local broadcaster Radio 10 that he has received death threats after posting the picture he took with his son next to the open casket of Diego Maradona.

"They say they are going to kill us, break our heads," he told the station.

Fernandez apologised for taking the picture with the late football legend.

"My son, like every kid, raised his thumb and they took the photo... I know that many people have been offended, they have taken it badly."

Apart from the picture made by Fernandez, another photo with a third worker, Diego Molina, emerged online on the day of the funeral.

The photos provoked outrage among Argentines. According to the Sepelios Pinier funeral parlour, all three workers, who were actually "outsourced" employees, were fired. Maradona’s lawyer Matias Morla has promised to take action against "the scoundrel" responsible for the images.

Diego Maradona died in Buenos Aires on Wednesday at the age of 60 from heart failure. Before that, he'd undergone surgery for a blood clot in his brain.