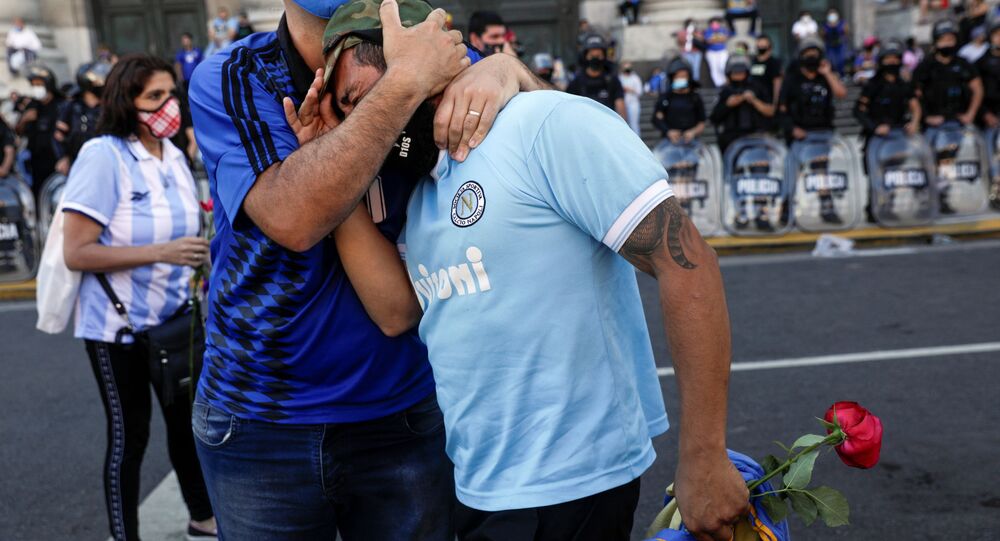 BUENOS AIRES (Sputnik) - Nine people were detained on Thursday in the Argentinean capital of Buenos Aires over riots and other public order violations following the death of the Argentine football legend, Diego Maradona, the Infobae news portal reported.

The iconic soccer player passed away on Wednesday at the age of 60 from a cardiac arrest. Two weeks before his death, Maradona was discharged from a hospital where he had undergone brain surgery.

According to the media outlet, the arrests reportedly took place throughout the night and into the morning near the presidential palace where the fans were starting to bid farewell. The portal added, citing sources, that there were multiple cases of looting, vandalism, riots and clashes with the law enforcement officers.

Latest from the Maradona memorial: police have now set up a barricade at the entrance of the Casa Rosada (For my fellow gringos: it's the white house for Argentina basically). It's getting spicy. pic.twitter.com/bFigh8SYDp

Argentine President Alberto Fernandez eventually decided to limit the number of people who could file past the coffin of the football legend, the TN broadcaster reported. In the end, the casket was taken out of the presidential residence as the situation became chaotic, and the funeral procession headed to the cemetery.

Argentine fans mourning for Maradona *inside* the Pink House (Argentine equivalent of the White House). Yes, they've broken inside the executive mansion and office of the President of Argentina.

A Sputnik correspondent reported that the police fired tear gas at the angered fans, who found out that the farewell ceremony would end earlier than previously announced, but it was then extended until 7.00 pm local time (22.00 GMT). Later, the police used tear gas and water cannons again, this time to disperse the crowds attempting to get into the palace. Fans were chanting slogans and singing songs to commemorate Maradona.

Impatient Diego Maradona fans clashed with police at the Argentinian presidential mansion, Thursday, November 26. ————👤👤Fans threw bottles and metal fences at police near the Casa Rosada in the heart of Buenos Aires. pic.twitter.com/7VavAZNOA7

Meanwhile, Margarita Simonyan, the editor-in-chief of the Rossiya Segodnya international news agency and the RT broadcaster, said that RT's correspondent and cameraman covering the farewell ceremony were injured during the riots.

Argentine Interior Minister Eduardo de Pedro has blamed the Buenos Aires authorities for clashes between police and Maradona fans, calling them to end the violence.

"We call on Horacio Laretta [Buenos Aires mayor] and Diego Santilli [vice mayor] to stop this madness on the part of the city police", the interior minister wrote on Twitter.

Tens of thousands of fans spent hours waiting for the opportunity to pay their respects to Maradona for the last time. The great football player was buried at a cemetery in the Bella Vista residential area near Buenos Aires, where his parents rest in peace.