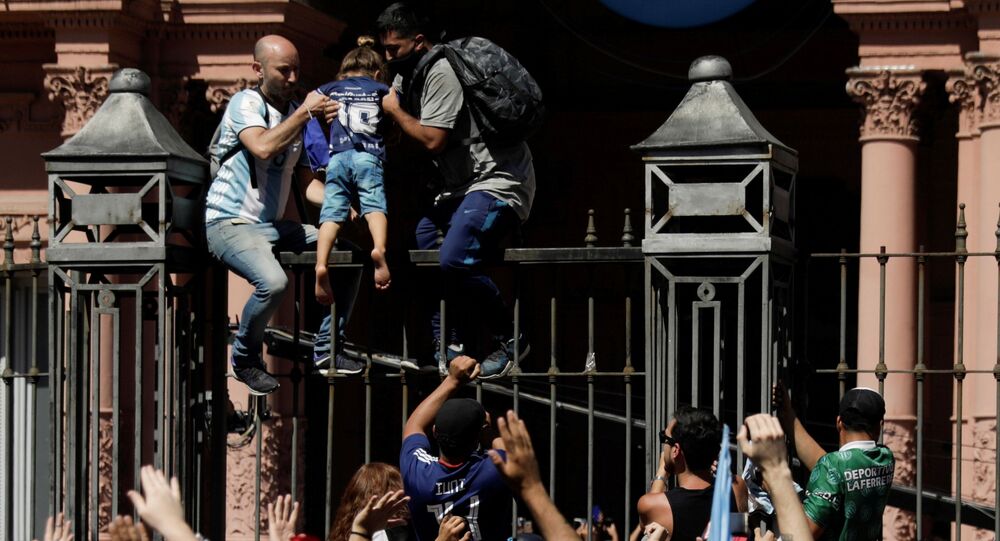 Maradona's death sparked riots and public order violations in Argentina's capital of Buenos Aires, as people around the world are mourning the football legend.

The funeral ceremony to pay tribute to Argentinian football star Diego Armando Maradona has been suspended in Buenos Aires, as citizens are trying to access the government palace, the TN broadcaster reported on Thursday, adding that the casket was about to be removed.

The funeral procession will head to the cemetery in the town of Bella Vista, about 22 miles from Buenos Aires, where Maradona's parents are buried.

Police forces have been mobilised to contain the large crowd gathered in the vicinity of the Casa Rosada, the official residence of the Argentinian president, after furious fans broke fences to enter the palace.

Thousands of citizens spent hours on Wednesday waiting to pay tribute for the iconic football player, who passed away on Wednesday at the age of 60 from a cardiac arrest. Two weeks before his death, Maradona was discharged from a hospital where he had undergone brain surgery.

The funeral ceremony started peacefully in the early morning but soon grew chaotic, with clashes reported between citizens and police. A Sputnik correspondent reported that the police fired tear gas at the angered fans, who found out that the farewell ceremony would end earlier than previously announced. Later, a source in the Argentine government said that the authorities decided to extend the farewell ceremony until 7.00 pm local time (22:00 GMT).