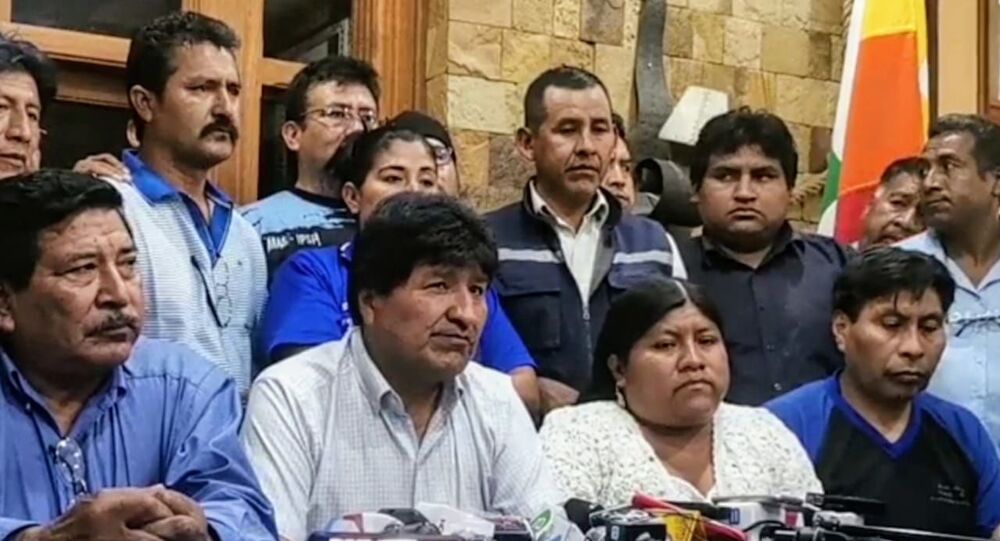 Morales, Latin America's first indigenous president, said candidates for his Movement for Socialism party in coming regional elections must be ready to implement its political programme in conjunction with mass popular organisations.

Bolivia's former president Evo Morales has been appointed chair of the ruling socialist party he founded 22 years ago - a week after he returned from exile.

The ex-president's phoenix-like rise from the ashes of 2019's coup d'etat was completed on Tuesday when a meeting of the Movement for Socialism–Political Instrument for the Sovereignty of the Peoples (MAS-IPSP) and its allies elected him as president of the organisation.

"National and provincial leaders of the MAS-IPSP and of social movements decide, by consensus, that I will actively assume the presidency of Bolivia's most important political instrument," he tweeted.

Morales, Latin America's first fully-indigenous president, returned from exile in Argentina on November 9 in the wake of ​MAS candidate Luis Arce's victory in October's presidential election and the party and the party regaining control of both houses of congress. He was welcomed on his return by 1.5 million supporters.

Morales said a national congress had been called for November 21 with President Arce, Vice-President David Choquehuanca, state governors, mayors and other officials to lay the basis for electing candidates for coming regional elections.

The choice of candidates would reflect the fact that "our political movement seeks the liberation of the peoples," He said, adding: "Our governing programme is the people's and the candidates must execute the programme and projects together with the people and their social organisations."

The spectre of political violence still hangs over Bolivia despite the defeat of the post-coup regime. A video posted on Twitter on Tuesday purportedly showed a mob torching the home of MAS congresswoman Muriel Cruz.

​And Grayzone News editor Max Blumenthal tweeted a photo of an arrest warrant issued for Arturo Murillo, who served as interior minister under interim president Jeanine Áñez but has since reportedly fled to Panama. Blumenthal said Murillo had threatened him and colleagues with arrest when they travelled to Bolivia to observe this year's election

© AP Photo / Phil Nijhuis
Video: Venezuelan Foreign Minister Takes Down Portrait of Pretender Guaidó in Bolivia Embassy
​Dozens of MAS supporters were killed during the coup, which SpaceX CEO and major Tesla shareholder Elon Musk claimed to have set in motion. MAS leaders were assaulted and humiliated in the streets and many were arrested by the interim regime.
...
Reddit
Google+
Blogger
Pinterest
StumbleUpon
Telegram
WhatsApp
530