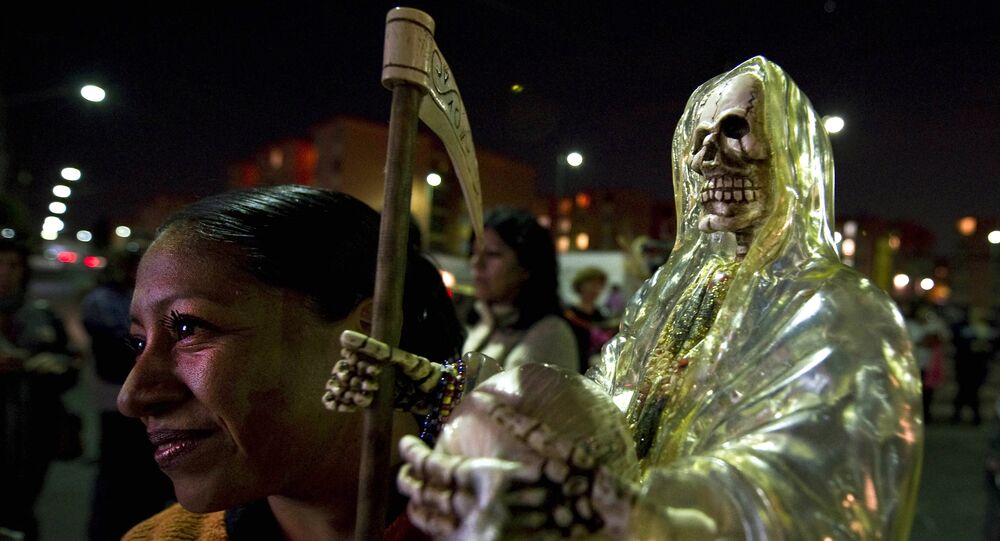 Last year, an altar made by a Mexican gang and dedicated to La Santa Muerte, featuring “satanic masks” and containing "human remains along with skulls covered with blood", was reportedly found during a police raid in the municipality of Cuauhtemoc, Mexico City.

The origins of a macabre death-worshipping religious cult may lie in a small Mexican town where locals stopped venerating Jesus, the Daily Star reports.

The object of the cult adherents' devotions is known as La Santa Muerte, or Saint Death, usually depicted as a "skeletal grim reaper", and "has roots in Aztec and Mayan death gods", as the newspaper puts it.

And while so far it has been unclear exactly where this phenomenon originated from, a cartel expert and former US federal marshal named Robert Almonte now postulates that it began several decades ago, in the town of Tepatepec in the central Mexican state of Hidalgo.

As Almonte explained, when he visited a Santa Muerte "cathedral" in the city of Pachuca back in 2007, which he described as "a beat-up old warehouse building with a lot of really dark stuff in there – statues of Santa Muerte, witches, and The Devil", he spoke with the caretaker of the place and was directed to Tepapetec.

"In visiting that church, I was told by the locals that about 70 years ago, the parishioners at a Catholic church wanted their priest to allow them to place a statue of Santa Muerte, representing the Angel of Death", he said. "At first the priest refused, but eventually gave in and allowed it. After a while, the priest began noticing that the parishioners were praying only to the Angel of Death, and ignoring the other statues of the Catholic saints – and even ignoring the statue of Jesus Christ. This angered the priest and he ordered the statue to be removed, where it eventually ended up at a private shrine in the area."

Almonte also said that he managed to visit that shrine and that the locals told him "the same story".

The newspaper also points out that while not all of the Santa Muerte worshippers are involved in criminal activity, last year, an altar made by a Mexican gang and dedicated to the saint was discovered during a police raid in the municipality of Cuauhtemoc, Mexico City; the altar in question was "reportedly made up of satanic masks and contained human remains along with skulls covered with blood".

Members of the fearsome Los Zetas drug cartel have also "come to embrace the cult", the newspaper adds.